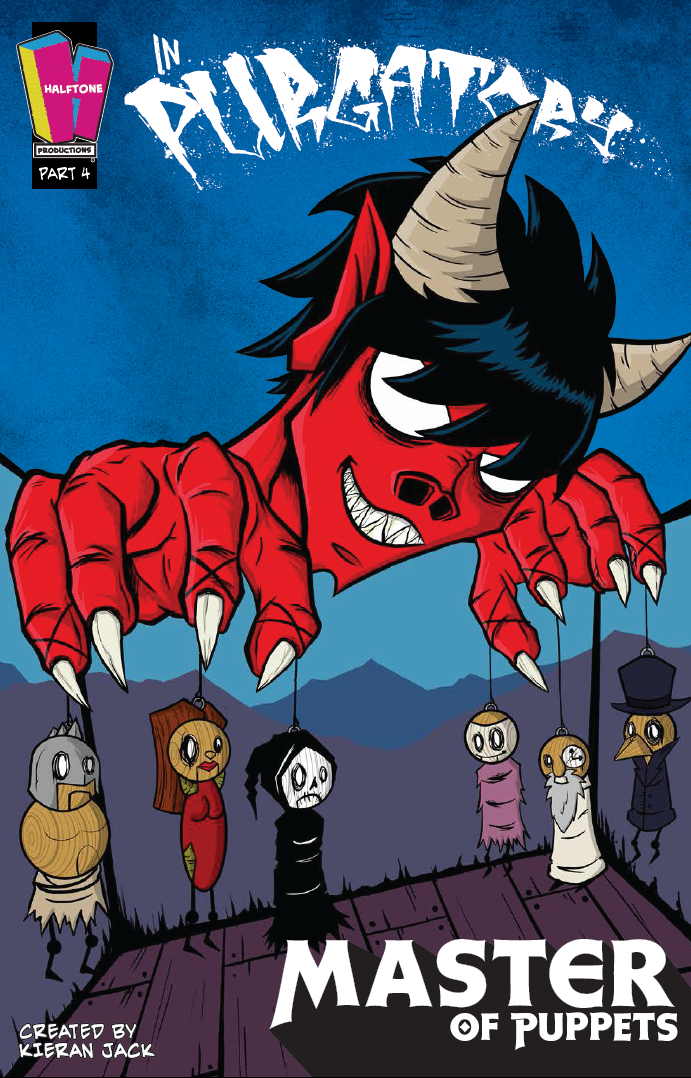 In Purgatory #4 reviewed by Jerome February 25, 2021
Master of Puppets

Origin stories are common in comic books, and it’s rare to find a proper origin story from Australian titles. Many serials are not long enough to matter, whilst some go for action-packed stories that show off what the character is capable off.

In Purgatory #4 is one of the rare origin stories that also tie many loose ends whilst telling the background of how a character went to be. It’s not the strongest story in the series - not by any stretch of imagination. Even then, it offers not only the best quality but some insight on what we should expect.

The Story and Writing of Master of Puppets: Blackhole of Fun

In Purgatory #4, titled Master of Puppets, is an Australian comic book published by Halftone Productions. It is written, illustrated and lettered by Kieran Jack. Logan French also worked as a guest artist for pages 4 to 7 whilst Bradley Adan helped with the lettering.

The story of Master of Puppets continues from the last chapter, where mysterious bishops visited Damian, Son of the Beast, in the underrealm. As the old men gloat about their handiwork, the new leader of the underrealm shows who’s boss.

We’re also treated to a flashback, at the time when Chronos started all his plans for the uprising against Behemoth. Here, we see the origins of Damian and how the demon child learned of his lot in life.

The comic book also introduced “The Demon of Makeout Point”, a quick one-shot of Popobawa and how he culls souls of the living.

When it comes to the writing of In Purgatory #4, there aren’t a ton of things to write home about. Apart from it being a good, short story that answers a few questions, much of it is a transitionary story towards the many moves that The Son of the Beast has on his chessboard.

He’s efficient and ruthless. The kid is a master manipulator and looks like five steps ahead of everyone at any point in time. Since overtaking the throne, he devised several strategies that assure his leadership and his plans to raze everything.

My only problem so far with Damian is he’s devoid of any proper character. A common issue for competent comic book characters is how to give them, well, “character.” Damian saps the joy in the room, and he can quite the dry villain.

He has a Vandal Savage feel to him - tactical and competent, but he’s a very hard character to enjoy. Even then, that’s the entire point of a villain. Fans are not supposed to like villains, and his work as a foil to Death/Grim Reaper works nicely.

The Art of In Purgatory #4: Gothic As F

The art of Master of Puppets is some of the best I’ve seen in the series. Kieran Jack’s technique with his inking is always superb, and I enjoy his style. What surprised me, however, were the pages made by Logan French.

So far, Logan did well integrating his style with the aesthetics of In Purgatory. I was even confused for a bit when I finally read the credits page. His art style jives well with Kieran’s use of shades and blacks.

I particularly love the treatment Logan gave to one of Damian’s parents. The design is cool! The gothic lolita aesthetic, together with the porcelain white skin is quite metal. The (coarse) Latin done by Kieran was also a nice touch.

Should You Read In Purgatory #4?

Should you read In Purgatory #4? Yes, and for all the right reasons. Whilst the story needed a little more meat on the bones, it’s a crucial bridge between the first three chapters and the next chapters.

Whilst it’s not the chunkiest story, it’s still as important.