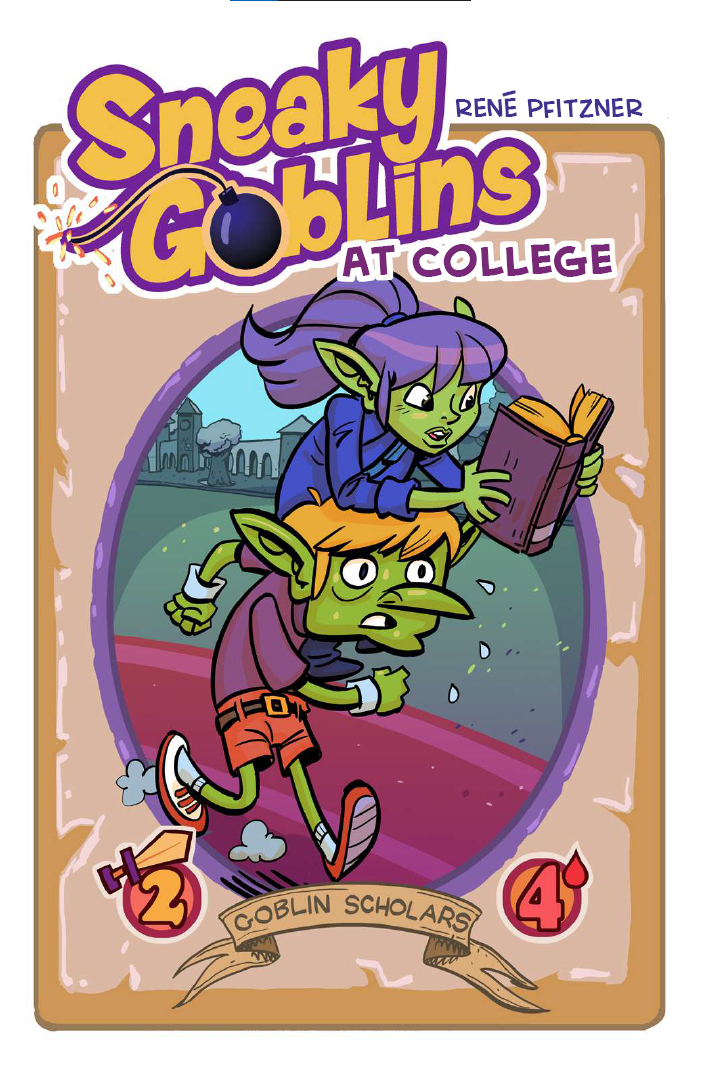 Prequels are usually super interesting if you’re interested in the lore. Case in point - The Hobbit, X-Men: First Class, The Dune prequels etc. It’s even better if you can find prequels that are a great read!

A Trio of Stories

I’ll give the stories a look individually, but to get it out of the way: the art of the entire graphic novel is standard Rene Pfitzner - great quality art with awesome colour from top to bottom. It’s beyond the standard coloured comedy comic book but rather an easy-to-digest series of stories.

Goblins at College is a story that follows Dank through his early years in assassin school before his eventual move away from it. In this tale, Dank, who was always bad with academics, got new learning techniques from his best friend, Sophie.

The story is straightforward, making it feel like a coming of age story for Dank. Whilst it’s not as big and heavy as an actual coming of age, it sets up a few good areas about Dank as a character.

Goblins at College sets up what Dank is - a honest to goodness bumbler to stumbles his way around the world. It also notes how he will survive: through his ability to connect with people and get them to act.

Storywise, this first tale is as simple as it gets. It’s linear, mostly working as a Rocky training montage to get us where Dank is. It’s a solid short story that tells us, really, how unremarkable our main character is.

In his own way, he is also one of the kindest, most genuine people in the story, second only to Sophie.

Bog The Orc Review: Songs of the Outcast

Bog The Orc is the origin story for, well, Bog The Orc. It follows his tale of being the worst orc in the land but being the best bard out of his lot. Even then, him sucking at being an orc is not a bad thing.

The orcs seem to follow the standard Tolkien/Warcraft trope of savage tribes. Bog is as gentle as they come - a peace-loving bard who likes to play the ukulele. This piece of lore is enjoyable, considering it sets up Bog’s location in the original graphic novel.

Being an outcast also paints Bog as the perfect companion for Dank. They are both gentle people who are unfortunately born in a warring society. They’re as star-crossed as they come for companions.

Among the three tales, this is the most interesting. Not only is the first page for the story amazing, it’s also as complete a story that we can get from this type of anthology.

Stop The Dragon Review: Shenanigans Save The Day

Stop The Dragon is an entire different take, working as a side story rather than a prequel. Even then, it shows off the value of their third member, The Mage. It shows off a few quirks of our heroes too.

The story follows Dank, Bog, and The Mage in the middle of their quest. As they rest in a town, they meet a dragon. Shenanigans ensue, and everyone bumbles their way to success.

Stop The Dragon is a quintessential hero story played straight. It’s literally a side quest in DnD or Warcraft, which makes it an awesome story for someone who loves the stuff like I do.

Should You Read Sneaky Goblins At College?

So, should you read Sneaky Goblins at College? The answer is totally yes! It’s a must-read even if you’re a new reader who has no background with Pfitzner’s work.

If you read Sneaky Goblins, this is an excellent supplementary story that adds layers to the lore. If not, it’s a superb read regardless.