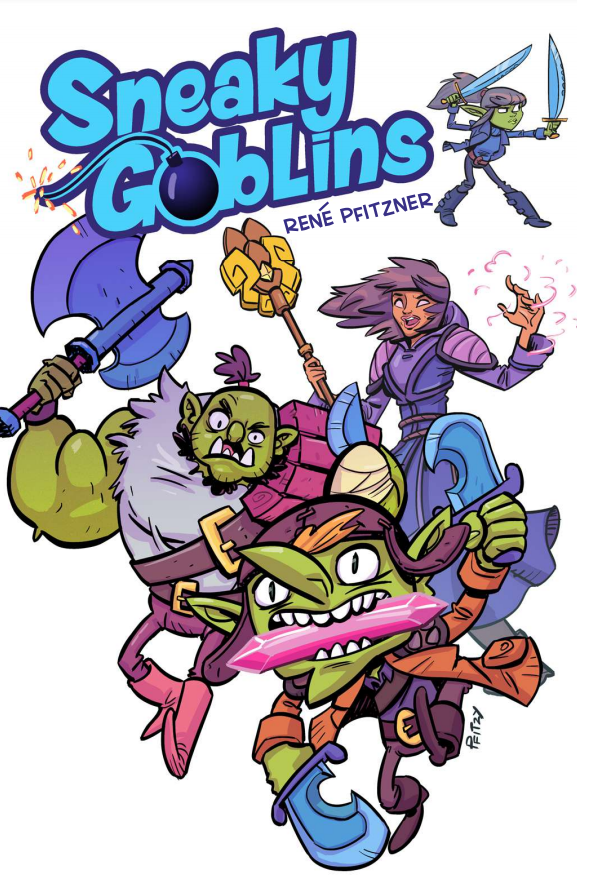 Apart from the original short stories, it’s not too hard to find ancillary media that puts about fantasy stories and goblins. What’s hard is to find something of quality, or a story that doesn’t only use their lore in passing.

Sneaky Goblins is one of those stories that a lore addict like me enjoys, and for a reason. It takes on the wonderful trope and turns it on its head without scrimping on either lore or atmosphere. It helps that it uses cute illustration reminiscent of some of the best medieval fantasy titles out there.

The Story and Writing of Sneaky Goblins: Misadventures Out The Wazoo

The story follows the misadventures of Dank, a goblin student trying to pass assassin school. As he flunks his way and gets kicked out, he tries to find a way to prove his worth and hone his skills. He meets unlikely allies along the way, including an orc bard and a human high-mage.

Sneaky Goblins is one of those titles that you would think is for children. Within its cute design, green skin, and comedic exterior lies one of the most brutal Australian comics.

Anyone can die in this comic book, and it’s proven time and again that kill counts only go up, not down. The Tolkien-style medieval fantasy story is a solid read, reminiscent of superb D&D session or World of Warcraft.

Whilst the cast are some of the chattiest characters I’ve seen, they’re also entertaining. They keep annoying each other, tolerating each other, and being a nuisance, but they still do their best for their situation.

It’s hard to pull off comedy. It’s harder to pull off if the characters are usually villains in other stories. Rene did an awesome job creating seemingly warm living world. The world-building is self-contained, not asking for any prior knowledge of tropes.

Here, the goblins are different - they are still at a bitter war against humans and other creatures. Even then, goblins do their best to live in peace. The story is fun and complete, with very little in mishaps.

There’s a point in the story that everything feels like a blur. The massive story takes a while to read. Even then, it’s worth the look. There’s a great payoff for those who go from start to finish, even if it’s a literal 160+ page graphic novel.

What makes Sneaky Goblins among my favourites is the art. Rene Pfitzner has this type of comedy that he only communicates through his art. It’s cute, but at the same time there’s a level of maturity to every stroke.

The pencilwork and inking is clean and complete, with outlines rarely underdone or exaggerated. He’s also great at putting proper background art where needed and showing emotions from facial reaction.

Even then, there’s also a chance that the style is Tolkien in nature. Regardless, it’s super entertaining comic book art. The colour adds a lot to the story, and it’s one of those graphic novels that you’d want to re-read every now and then if you own it.

Should You Read Sneaky Goblins?

Should you read Sneaky Goblins? A definite yes on my book! It’s a great graphic novel with a compelling plot read from the other side of the fence. It’s one of the better comic books and a surefire top 20 minimum in my personal ranking.