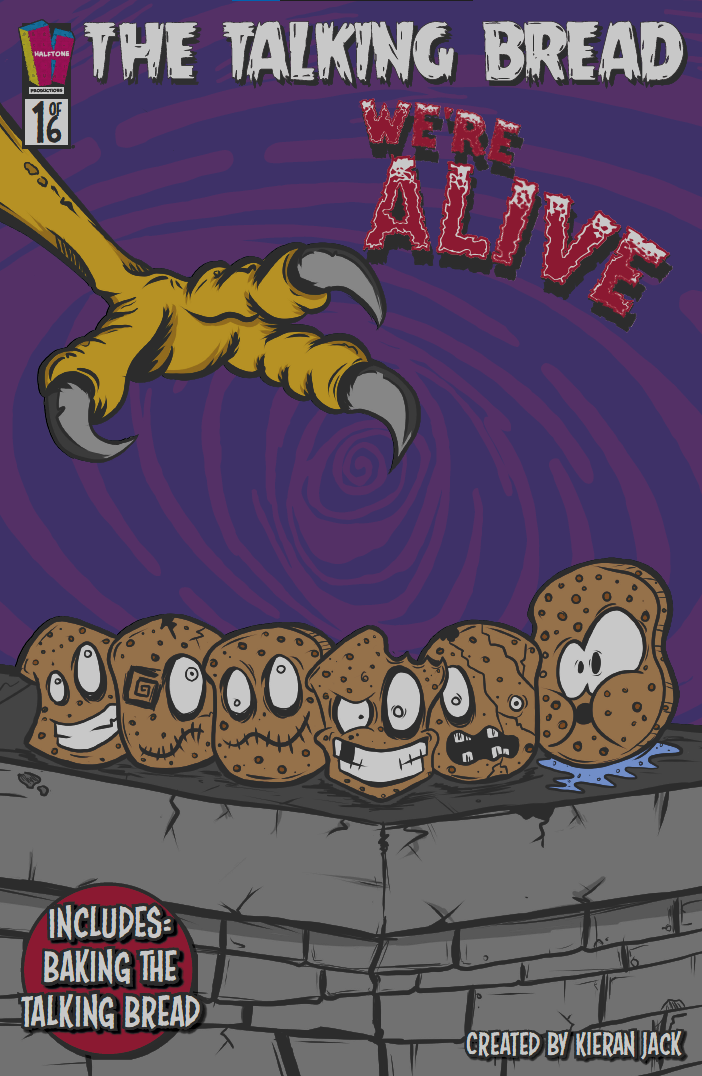 It takes gusto to get a load of sliced white bread, write a comic about them, and be funny too. Yet, The Talking Bread #1 is as cute and comedic as it gets. It combines random humour to the misery of some creatures who never wanted to live.

The Talking Bread is not a masterpiece - not in any stretch of the imagination. Even then, it’s neurotic comedy at its finest and it’s entertaining as heck.

Mealy Introduction: The Story and Writing of The Talking Bread

The Talking Bread #1 is a six-part Australian comic book published by Halftone Productions. Kieran Jack is in charge of the story, art, and cover, with edits from Clare Jack and Lucas Wittingslow.

The story follows a group of mutated sliced bread thrown away due to being failures. As they free themselves from their plastic prison, they learn how harsh the real world is. They go through many different obstacles, making and losing friends along the way.

The story of The Talking Bread is a cute, neutral comedy full of neurotic humour, naive misfortunes, and a ton of bumbling around. I’ve always been in love with how Kieran Jack writes his stories, with In Purgatory among the ones I’m reviewing right now.

If I remember correctly, this is among Jack’s first stories, which is very obvious with how he writes it. So far, there is a level of chaos in the comics that comes from the perspective of the talking bread. The overall atmosphere was jarring, in a good way.

The story’s pacing starts slow, starting in a dirty back alley of modern day Melbourne. Once the slices get out, the pace quickens with blatant disregard. These stories show how logical Jack does his plot.

Things happen to everyone, curious about the world they are in. Everyone gets broken, smashed, kidnapped, and many more, much to their innocent chagrin. The chaos only stops at the end, and by then, readers are similarly confused by the series of events.

If Jack intended the story to be as chaotic as it is, he did a good job doing so. It’s not the best narrative from Jack, but it’s not bad either. For a supposed first comic, this is a solid average to slightly above average series of events. The only issue I’ve found were the slipshod work on a few details.

The most glaring issue I can see in the writing is the introduction for the characters. When I read this for the first time, I was unable to differentiate the sliced breads. I understood that the eyes differentiated them, but the details weren’t enough.

This complaint is more art than writing, but it would’ve worked better if we had more time to know the slices. Going deeper into the worldbuilding would add much-needed investment for the main characters. I would’ve wanted a couple more pages of introduction too before they were ultimately taken away.

Nice and Firm Art Design: The Art of Talking Bread #1

The art of The Talking Bread #1 is classic Kieran Jack, and it shows. The thick outlines, the solid shades, and high-quality illustrations are always a strong standard for his work. This comic book is a great look into his origins and the evolution of his art.

So far, his style has is some of the best I’ve seen around, with a few exceptions. For a one-man band, however, he has some of the best work out there. With this comic, he is yet to use a ton of greytones, which changes as he moves on to other series.

The art is clean, and the panel variation works. Whilst there aren’t a ton of texture on the panels, it still shows off the disorder he’s trying to show off. If this is the quality of art that we can expect over the next five more issues, I’m excited to give the next issues a read.

Should You Read The Talking Bread #1?

Should you read The Talking Bread #1? Yes, I recommend giving this a read when you have free time. It’s a nice, simple slapstick comedy and a decent introduction to a new tale. I hope it improves over time, with better worldbuilding in the future.

You can find a copy of The Talking Bread from Halftone Production’s official website or in comic stores near you, where available.