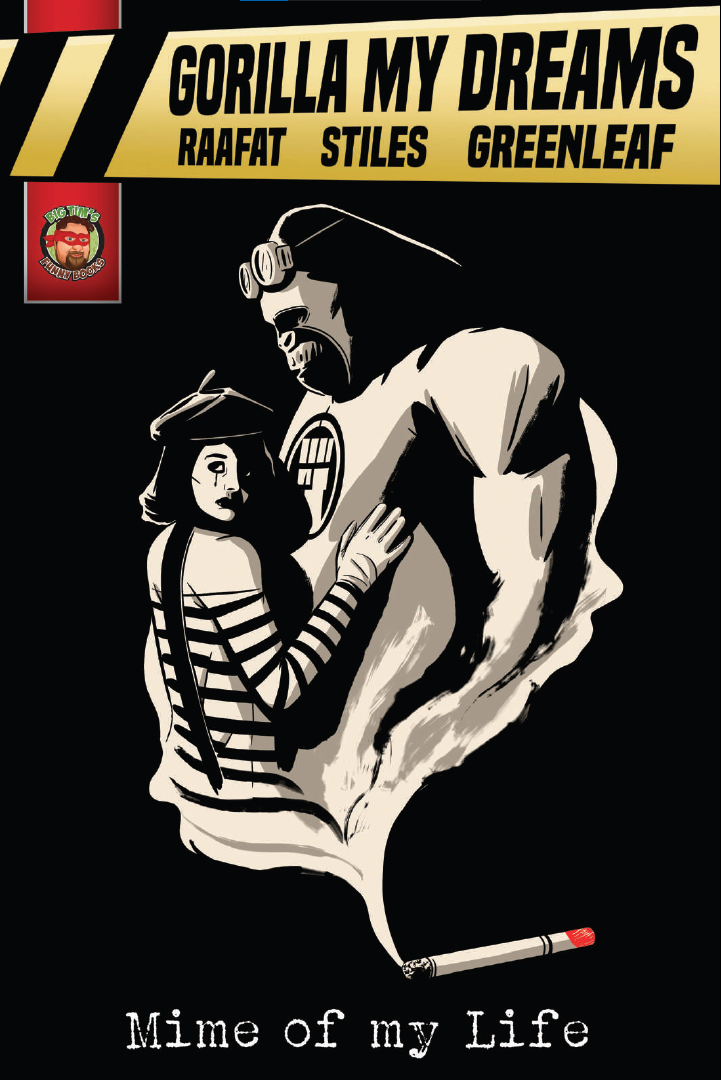 I don’t want to spoil the surprise but the first panel is a dead mime. What’s not to like?

What follows is a delightfully absurd story with a hint of something deeper under the surface. The main character is a talking gorilla called “Knockaround Guy”. It’s not immediately apparent what, if any, super powers KG has, only that he considers himself on the B-list in a town full of A-list heroes. And he’s OK with that.

The A-List heroes cut strikingly familiar shapes, as they zip across the sky. But Knockaround Guy operates strictly at street level. And he likes it down there.

But this is neither New York nor Gotham. This is Struggle Town. Yes, our lead Gorilla is literally a Knockaround Guy from Struggle Town. It’s a cheezy gag, but that’s ok, because it’s surrounded by gags of all flavours. This book is genuinely funny.

It’s great to see an Australian writer not leaning too heavily on Aussie kitsch. This is a wonderfully sarcastic spoof of the Superhero genre. Some of it is perhaps a little too obvious, but who’s got time for subtlety these days?

The A-list heroes are not the real story. The real story is populated by an original cast full of wonderfully weird characters. There are shapeshifting strippers, killer clowns, a bookie who is a cactus, a bartender who appears to be a yeti, a duck who appears very much to be a duck and very much a drunk, a brawling Valkyrie (who is also a stripper), a monster hunter who dabbles in the dark arts, and a coroner called Dr Worm who is a real doctor but not a real worm (no indication yet whether he likes to play the drums).

It’s a story that’s equally packed with wonderful absurdities. There’s a magical mime murdered by mime magic. There’s a gang of evil clowns. There’s necromantic witchery. There’s a couple of good old fashioned beat downs, but the kind you only get when a talking gorilla goes primal.

Oh, and there’s a sidekick. Or at least the introduction to a sidekick, and the promise of more sidekick to come.

Like many comics, it suffers from the need to cram exposition into narration and dialogue. At times it feels like too much of the story is being narrated and not performed by the characters. We’re being told what happened, not shown in real time. Without knowing the details, I suspect page limits and budgets may have been a factor here. And I guess that’s the challenge facing a lot of independent comic creators: the budget sets limits on the storytelling.

It does not, by any means, detract significantly from the story being told. If anything, it’s an efficient way to pack more story into the pages available - yet I’m still left wanting more.

I don’t know how Big Tim hooked up with UK-based Egyptian artist Ahmed Raafat, but it’s a good thing he did. The art is fantastic. It's moody and detailed and full of life and, as it should, it carries a lot of the weight of the storytelling.

But not all of it. Midway through, there’s an interlude. The art style simplifies, the tone changes. More introspective. More personal. Suddenly you realise you're in the mind of a gorilla with anxiety and depression and it’s obviously a thinly-veiled autobiographical snapshot, and it’s honest and raw, and full of empathy. It doesn’t really fit with the rest of the story. And it’s important.

It seems Big Tim Styles might also be just a Knockaround Guy from Struggle Town, with his own battles to fight.

Gorilla My Dreams #1 – Mime of My Life is mostly the story of KG’s efforts to solve the mystery of the dead mime. Gorilla My Dreams #2 – Gorilla Tails is a series of vignettes that offer back story, alternate angles, and further twists to the tail.

It feels like there’s more story to come. But it was a long time between issues, and it’s not entirely clear when, or if, Gorilla My Dreams #3 will drop. I want more of Knockabout Guy. I want more of this. The characters are delightfully absurd. The scenarios are silly and fun. The stories are too short.

I hope there’s more to come. I hope Big Tim Styles is victorious in his battles with whatever it is that prevents him from churning out more of these so we can all find out more about this Knockabout Guy from Struggle Town.

The disappointing thing here is that #1 appears to be unavailable. Perhaps if everyone who reads this goes and splashes out the $5 it currently costs for #2 on Big Tims Funny Books <https://bigtimsfunnybooks.bigcartel.com/>, we’ll get more of this great ape caper.

Tony is currently writing his first graphic novel, and in the process has rediscovered the world of comics after a long absence. Absence has indeed made the heart grow fonder. Now he just has to convince his children that comics aren't just for grown ups.