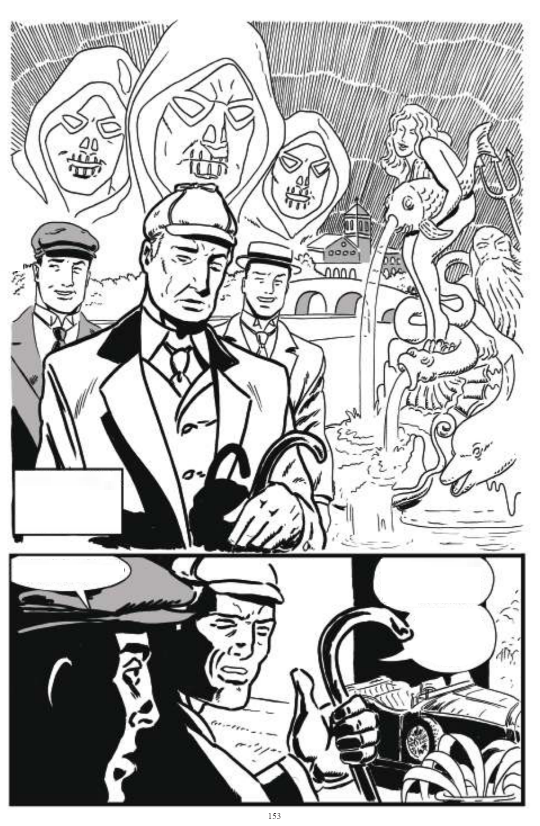 The Wrath of the Cursed # reviewed by Jerome February 24, 2021
The Brigands

It’s another journey through the generations as today, we’re looking at another story within The Wrath of the Cursed collection. Now, we’re looking at The Brigands, a newer age take at the story of The Cursed.

Whilst the story is going further away from the traditional setting, it goes closer to the ageless, timeless prologue/side story. It is reminiscent of a few Australian classics, but how does it fare? Let’s find out.

The Ghost That Walks: The Story and Writing of The Brigands

The story follows the globethrotting adventures of Joseph Cole and his sons, Raymond and David, as they visit Italy around the early years of the 20th century to meet a few acquaintances. Trouble finds the three gentlemen and the younger gents are called to action.

The Brigands is among my most favourite stories within the collection, second only to the four-part original. With its setting around the roaring 20s to early 30s, the story is a quintessential Wrath of the Cursed side story.

This tale has all elements of a great story, more so than its predecessor The Pirate Queen. Whilst The Pirate Queen is a better individual story, The Brigand ties in better into the timeline, giving a good connection to the world built by Matt Kyme.

This story sealed the deal that The Cursed, more than a hapless sword of a lord from the Warring States, is a legend. He is more akin to The Phantom, the ghost that walks.

To the uninitiated, likely not Australian or a fan of comics, The Phantom is a fictional crime fighter operating in Africa. For generations, he lived and fought crime, with locals thinking of him as an undying spectre of justice.

Known as the “Ghost That Walks”, The Phantom is a title, passed on from generation to generation, rather than an undying protector. It seems Matt chose the same route with The Cursed, but the similarities end there.

The new Cursed are more willing to use their skills to help. They are not revenants of vengeance anymore, but rather master assassins. They have also eschewed the sword for a much more updated weapon.

This natural progression of the story is a solid callback, even if this chapter, as a comic, is much more linear than previous tellings.

One of the few complaints I have is the story is too short. Much of the story spans an afternoon, give or take, and it doesn’t do too much character exploration.

I was invested in both Raymond and David when I was reading the story, only to get the focus away from them. If the story had a dozen more pages or so, it could’ve developed the story much further.

Dark Into The Light: The Art of The Brigands

The art of The Brigands is a culmination of Matt Kyme’s technique. So far, it’s far less gritty than the main story, and for the better. It reflects the better times that the characters experience compared to what they had from before.

Within the mainline Wrath of the Cursed, the art design was deliberately dour. It used thick lines, a bevy of sketch lines, and several tonal contrasts to create that “period” look. In some panels, you’ll even see similarities to Heian or even Sengoku period art.

In the current story, Matt uses thinner lines, cleaner shading, and lighter tones. There is more white space, signifying a more well-lit space for the characters. They’re no longer warriors of the dark, but rather heroes of the light.

Sure, they’re still spectres, and they still carry their tragic tales with them, but they are “cursed” with helping people wherever they are.

Is The Brigands a Must Read?

Should you read The Brigands? So far, this tale is the best side story for the world of The Wrath of the Cursed. It’s the quintessential story that offers a great prologue for the tragedy that is Cole and his bloodline.

If you’ve given the mainline story a read, I suggest giving this a look too. You can find the complete collection online or in comic book stores near you.