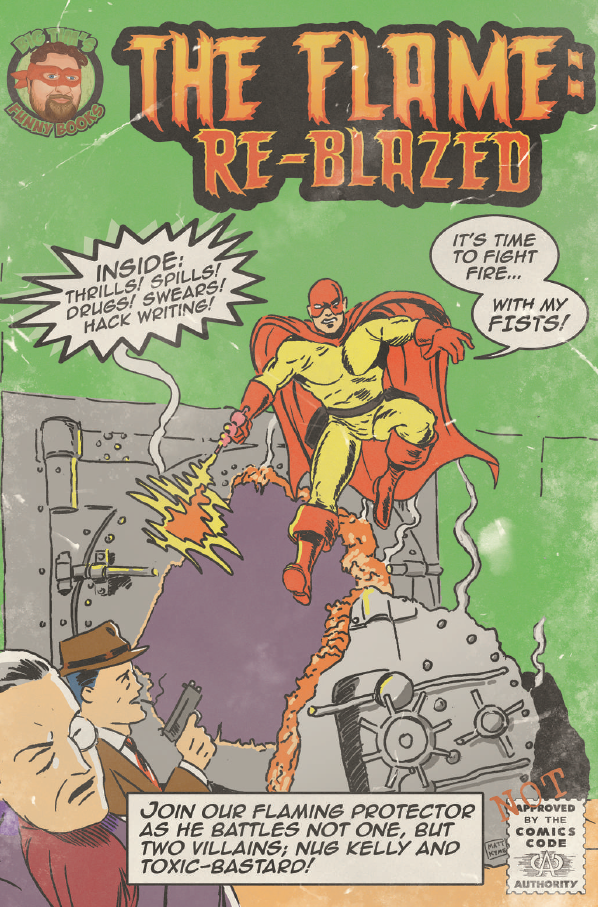 The Flame: Re-Blazed #1 reviewed by Jerome April 30, 2021
The Legend of Ned Kelly, The Flame, The Blue Flame

The Golden Age of comic books is not a time that most of us were alive for. Many fans usually find these titles from back catalogues, historical pull lists, and collectibles. With that said, there are also more obscure names among heroes of this time: those who were forgotten enough that they are now public domain.

The Flame: Re-Blazed #1 is a weird, tongue-in-cheek story that is used as a vehicle to have the writers let loose. It’s a great exercise on how to be as ironic and sarcastic you can be whilst creating a story that flows.

The Story and Writing of The Flame: Re-Blazed #1: You Need Context For This One

The Flame Re-Blazed is the first issue for the remake of Golden Age comic book The Flame published by Big Tim's Funny Books. The story is written by Tim Stiles, with art by Basil Berold and lettered by Nate Stiles.

The story follows Dariux, whose alter ego is the golden age superhero The Flame. As he fumbles his way into 2055 Canberra, he has several weird misadventures along the way.

Before we review the entire thing, we need some context with the comic. For those who don’t know, Basil Berold is one of the pseudonyms of the legendary Lou Fine. The Flame itself is a creation of Will Eisner and Lou Fine in the 1940s.

From what I gathered, Lou and Will created the original run of The Flame in the 40s with the Fox Feature Syndicate. It was among the Trinity of comic book heroes at the time, with others being Samson and the Blue Beetle.

The Flame had an 8-issue run until 1942, which was around the time that Fox Publications folded due to debts. By around the 2010s, the hero came into public domain, creating several types of stories that try to remake the original 1940s run.

Re-Blazed is one of those tales, with the comics having three funny stories in total. These are The Legend of Ned Kelly, The Flame, and The Blue Flame, where Tim Stiles added his own cheeky, sarcastic, and silly flavour.

The writing itself is funny and superbly tongue-in-cheek, which I totally missed on the first read. The jokes are stupidly cheeky but flows like a proper story. Tim, even when he’s trying to tell sarcastic stories, still doesn’t forget how to keep stories flowing and logical. The comic book is as silly as it gets.

The Art of The Flame: Re-Blazed: Too Much Like The Old Books

The art of The Flame: Re-Blazed remained untouched from Lou Fine’s original work. From what it looks like, the art looks like a raw scan, which make them look as old as it can be.

Whilst the story was great, the art itself could have a little bit of a touch-up. The inks were too gray for their own good, which clashed with the lettering’s typeface colour.

I may be acting a little spoiled, but for a reason. In the manga community, even older manga have set scanlation teams with both cleaners and typesetters. They make sure that the experience is as good as if you read it fresh.

I honestly don’t expect that here, but the grayness takes you out a bit off your immersion.

Should You Read The Flame: Re-Blazed #1?

Should you read The Flame: Re-Blazed? If you like cheeky stories that are super silly, this is the comic book for you. It’s not for everyone, especially those who are not into ironic stories like this one.

It’s best to treat it as a weird anthology of sorts that you can read on your spare time.