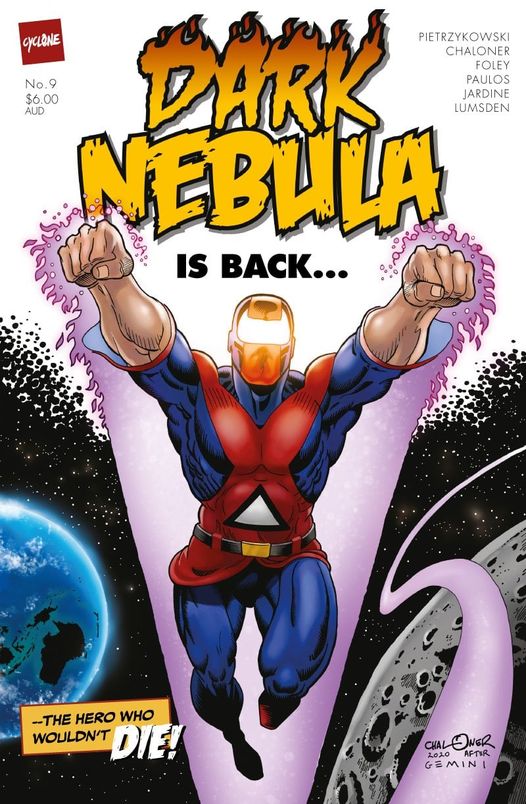 Dark Nebula #9 reviewed by Steve Saul April 29, 2021
Who Is… The Dark Nebula?/Roadtrip/The Other Side Of Life/One Good Turn.../Shoe Shine

In the early 1980s, before the rise of the comic shop, Australian newsagents were the place to go for comics. A steadily growing number of superhero, barbarian, and movie-based titles competed for space with Archie and his gang; with assorted local reprints and, of course, with the ever-present Phantom – who would outlast them all.

This situation would continue for virtually the whole decade, even as the specialist shops began to pop up in the major cities. However, in 1982, an upstart from the local scene elbowed its way into this cosy setup. Sporting an eye-catching, bright yellow and orange cover in apparent homage to the iconic Captain Mar-Vell, Dark Nebula had arrived.

This first appearance, now known as the Graphic Novel (but published a year before Marvel Comics made the name their own), stood out from the pack by virtue of its compelling cover and its size. The masthead “Australia’s Newest Super-hero Sensation!” was enough to send at least one young browser home with a shiny new copy.

A Quick History of Dark Nebula

Created entirely by Tad Pietrzykowski and published under the Helix imprint, the first outing for the Dark Nebula was clearly a labour of love. But we will deal with this landmark issue in a future review. In the late 1980s, the Dark Nebula appeared in the pages of Cyclone Australia! and the second Cyclone Super Special, before finally returning to headline his own title.

Dark Nebula the comic ran for eight issues from February 1989 to June 1991. Its final issue marked the beginning of a long absence for the character. Besides a couple of appearances in Southern Aurora Comics and a second Cyclone series, the Dark Nebula would not be seen again for fifteen years.

In 2006, Pietrzykowski launched the Dark Nebula website, reintroducing his character in web comic form. A series of graphic novels was also released in 2007 and 2008, collecting the web comic material and coloured versions of Dark Nebula’s original comic appearances. Then, another lull, punctuated by one 2015 appearance in Decay #19 from DarkOz.

Fast forward to late 2020. In the midst of the COVID crisis and with uncertainty growing over the distribution of American comics, the Facebook comics groups were tantalised by this image:

Of course, as many will know, Australian comics are beginning to find new ways to reach an audience, whether by means of crowdfunding or by publishing exclusively online. The frequency and variety of releases is growing but finding them can be challenging.

The fact that news agent distribution is largely a thing of the past leads to a difficult situation. New titles are found by word of mouth, by targeted online campaigning or by being in the right comic shop at the right time. But despite the difficulties, the Dark Nebula is back. So what’s he up to? Well, we don’t know. Yet.

This first return issue is in fact a collection of reprints – for a reason. Three of the five stories were first published in 1991, after the demise of the Dark Nebula title. As explained in the foreword, it seemed logical to gather these stories together under the Cyclone banner. This would provide continuity for the characters as well as testing the market for future new adventures.

Since they originally appeared after the eighth issue of Dark Nebula, these stories fit neatly between it and future planned releases. As mentioned, three of the five stories are from 1991. The first and last are from 1988, predating the original series. There’s a reason for that, as we will see.

The first story in this issue is, fittingly, Who is… The Dark Nebula? An introductory tale written and inked by Gary Chaloner with pencils by Glenn Lumsden, it retells the origin story as a four-page recap. Originally published in Cyclone Super Special #2, it presumably served then as an introduction for newcomers. And so it does again.

With the second story, Roadtrip, written by Pietrzykowski, drawn by Shane Foley and inked by Bodie Amerikah, the real action begins. An encounter at a roadside truck stop begins in an almost clichéd manner but rapidly takes a turn as The Dark Nebula reveals first his powers and then himself to a thug who rapidly learns his place in the pecking order.

The story begins with Dark Nebula’s alter ego, Mark Medula, on the road with his wife, Ann, and child and finishes with a meditation on the nature and limits of power. We are therefore given valuable and broad background information on the character.

Dark Nebula #9.3: The Other Side Of Life

The Other Side of Life is also written by Pietrzykowski and is drawn by Jason Paulos with inks by Joe Spellman. The story begins in a burst of action but soon settles down into what it really is: an encounter on the psychic plane and a study in the limits of what a hero can and should do.

In trying to save the life of an innocent victim, Dark Nebula is confronted with the question of whether he is doing so for her or for him. This tale, dedicated to a departed friend, deals with issues surrounding death. It has a gentle and sweet quality that enhances the theme nicely.

In this story, written by Pietrzykowski and pencilled and inked by Foley, we meet The Grandstander, another returning character and regular backup feature from the Cyclone days.

Effectively maintaining the character’s place in the title following appearances in issues #7 and #8, this story is that of a self-proclaimed rotter having a very bad day. Nothing the Grandstander attempts in this tale works out as planned – with very humorous consequences.

As mentioned above, the final story is also from 1988. Written and drawn by Glenn Lumsden from a plot by Alex Grancha, It features the Golden Age Southern Cross and is included to preserve the Dark Nebula lineup from previous issues.

Shoe Shine is a standalone story, featuring the title character in a supporting role but very much as catalyst for the main action. A distinct Eisner flavour pervades both story and art, as this story serves more to entertain in its own right than to introduce its main character. No doubt future issues will remedy that.

It is refreshing to see six different artists combine on these five stories to produce stories in distinct but strong styles. The quality of the art is uniformly high and is matched by the writing.

A quick note of appreciation for the publishers. In Cyclone Redux, Adventure Illustrated and now Dark Nebula, all editorial material is at the front, together with a very useful list of contents and creators. This provides both a unified look and feel to the Cyclone stable and a handy reference for the current issue and the history of the title. An acknowledgement of country on this page is a welcome addition. The bridge from Dark Nebula’s past to his future has been built. What lies on the other side?