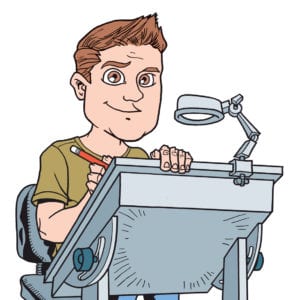 One of Australia’s most prolifically published comic book artists and illustrators, Stewart has worked for major publishers both within Australia and overseas, including Dark Horse Comics, IDW Publishing, Marvel Comics, DC Comics and Titan Comics.

Kids’ comics are Stewart’s specialty and he is excited to have been paid to draw many of his favourite characters, including: Batman, Superman, Wonder Woman, Flash, Aquaman, Twilight Sparkle, Pinkie Pie, Captain America, Iron Man, Boba Fett, General Grievous, Harley Quinn, Doctor Who and many more!

Stewart’s credits include artwork for the Eisner Award nominated, and extremely popular Star Wars: Clones Wars Adventures and Batman: The Brave & The Bold. He has also worked on Doctor Who, Detective Comics, DC Super Friends, Captain America, My Little Pony and Star Wars Tales. One of his comics has even appeared on an episode of The Big Bang Theory.


Batman: The Brave and the Bold

My Little Pony: Friendship is Magic