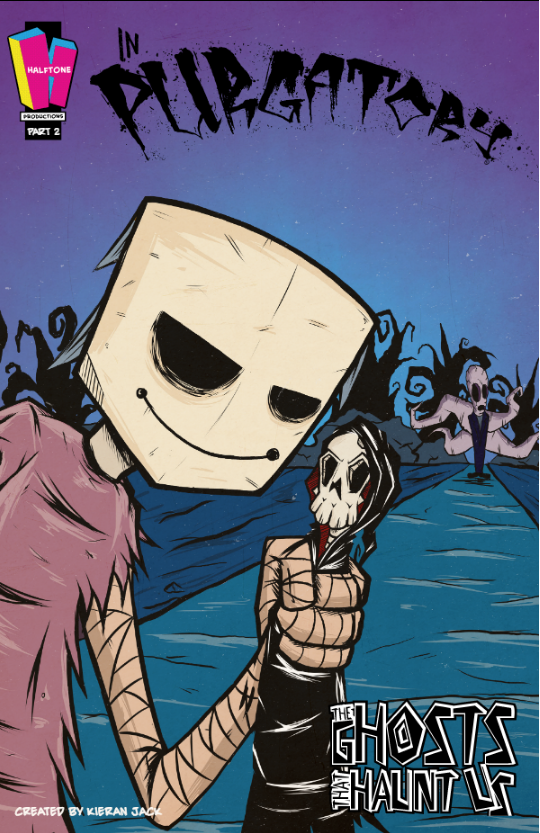 In Purgatory #2 reviewed by Jerome February 13, 2021
The Ghost That Haunts

Vendetta is a hard thing to keep, especially after death. Even then, the idea of revenge lasting after you pass away is something In Purgatory #2 tries to deal with.

In Purgatory #2, titled The Ghost That Haunts, is a continuation of the swerves and chicanery to further a long-standing grudge. It is painful to read but also quite an interesting look into grief.

Unlikely Allies: The Story of The Ghost That Haunts

In Purgatory #2, titled The Ghost That Haunts, is the second chapter to the series with the name as the former. It is published by Halftone Productions, with story and art from Kieran Jack and contributions from Jackson Caspersz.

The story of issue 2 continues to follow the Grim Reaper, in his search for the Behemoth’s throne. With the insurrection of Thorn and Chronos at hand, he is looking for the most unlikely allies.

Grim taps on several connections he had, including two souls who have particular grudges against him. As he desperately moves around and tries to expedite his search, he stops being careful.

The Grim Reaper eventually does a crucial mistake and reveals vital information. He is, however, saved by old faces, whilst another finds solace in murdering the ones who offended them.

Everyone Feels Alive: The Writing of In Purgatory #2

The Ghost That Haunts is a cautionary tale on trust, vendetta, grudges, and deep, dark secrets. Kieran Jack’s writing is well-known for its fantastic, coherent takes on different overarching themes. He hits the nail in the head with this story.

Within the entire series of In Purgatory, we are never given context for much of how Grim Reaper does his job. Much of our biases come from our innate understanding of how he operates.

With that said, the story puts the reader in a position where his own motivations are put into question. Is it right for Grim to trust the souls of whom he reaped? The right answer is no, and these lost souls were better off away from him.

Even then, the current situation makes sense for Grim. Somehow, the Grim Reaper feels alive. He feels like a real human who is nothing but a loyal soldier to his liege. He does his job right, and it’s hard to fault him for it.

To be fair, Kieran Jack is great at characterisation. He knows how to put human qualities into non-human characters, and his ability to anthromorphise is second to none.

The Grim Reaper is a funny old man who does right by his job. Mischief is a petulant child - broken by the world and full of grudges against the people who wronged her. Another character holds a secret that can destroy what little humanity is left in the characters.

The writing is easy to understand and as Kieran Jack as it can be. It calls to the reader’s humanity, even if the characters are anything but.

I don’t have much to criticise about this issue. If I have to, the comedy is a tad bit less this time, but it doesn’t detract from the story.

Better Than The Last One: The Art of The Ghost That Haunts

Kieran Jack’s art is still as flawless as the first issue. The Ghost That Haunts is even better because it has clearer strokes and snappier outlines. The inking is incredible, and the production quality is worth far more than its sticker price.

The characters still give off a Nickelodeon feel - funny, child-like, but not childish. It’s a mature story made lighter by the child-like forms of the characters. Even then, it’s horrifying where it counts.

There are panels where Jack knows using a more realistic style is the right treatment. These had deeper blacks, smoother grey tones, and harsher whites. The form, funny enough, is reminiscent of LucasArts’ Grim Fandango and Full Throttle.

Grim himself has the comedic art of someone from Grim Fandango - a funny, blocky sort of angle. The Full Throttle feels come out from various angles from time to time. Even then, I know for a fact that this is the quintessential Kieran Jack art style that we know and love.

In Purgatory #2 has a better use of deeper blacks, mostly due to the darkness of the setting. The weathered look is a nice touch too. The character design for Mischief reminds us that she’s a cheeky bugger and she’s more sly than we think she is.

Should You Read In Purgatory #2?

Is The Ghost That Haunts a must-read? I would say there’s nothing to dislike about In Purgatory #2. If you’ve given the first chapter a read and you liked what you saw, you will like this second issue even more.

The Ghost That Haunts is an improvement into an already stellar first chapter for the series. The story makes you excited to read the next one without giving you a deep cliffhanger.

You should give in Purgatory #2 a read. It will likely lead you to reading more of the next chapters! The story is only getting better, and we know a conclusion is nowhere in sight.