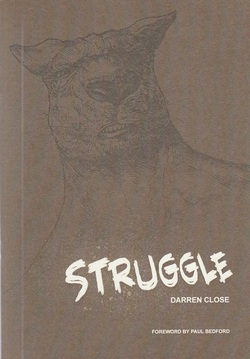 That is a question that has been pondered probably since art began. Is it an attempt to hold a mirror to creation and in some way assert understanding or control over it? Is it simply an act of creation in its own right? Or is it, as many maintain, our feeble attempt to understand, define and explain the human condition?

Perhaps it’s all three. Art is in the eye of the beholder, they say.

One thing has become clear across the ages as we have created, digested and pondered works of art: art can take virtually any form. Cave paintings, mighty statues, soaring skyscrapers.

No surprise there, I hear you say. I am, no doubt, preaching to the converted. But bear with me. Yes, there are many beautifully written and drawn books out there. Many soaring epics that create their own fully-realised, spectacular universes. Many that ponder the fabric of society and try to expose its wrongs either by allegory or direct revelation. There are books that explore what it is to be human in many and varied ways.

There are however, only a precious few books in which the creator looks inward and seeks to understand himself. Struggle is one such book.

Anybody that has had their work published must not only be talented – they must also be on top of their game and in absolute control of their talent and sense of self. Right?

So what’s the harm in wandering up to Darren Close at a convention or signing event and asking “How come you don’t draw the comics yourself?” According to the opening page of Struggle, that is the question most asked of Close by well-meaning fans. The rest of the book deals with Close’s answer to this question. It takes the form of an internal monologue.

Well, not quite a monologue.

It is in fact a debate between Close and the voice in his head – a voice embodied by his well-known creation, Killeroo. Representing inner doubt and self-criticism, Killeroo almost gleefully slaps down all of Close’s attempts to rationalise and explain his reluctance to fully express his talents and draw his signature character. He then starts in on Close himself. No area of perceived inadequacy is held sacred as the inner demon in kangaroo form skewers talent, character and personality in a searingly honest blast of self-criticism.

But fear not. There is resolution. It’s not rainbows and happily ever after. It’s real and it’s hopeful.

Yes – Close drew the comic himself. It was created as part of a 24 hour creative challenge and, according to a throwaway line by Killeroo, failed to meet that deadline. Again, Close takes every opportunity to be brutally honest. However, it is highly probable that the tale was completed in a short time.

Given that limitation, the only concession to time is a lack of background detail, cleverly pointed out in the dialogue. The artwork shows nothing to justify the self-doubts of its creator. Layouts are varied and effective, linework is solid and the style of the piece is consistent throughout. The climactic full page panel is stunningly evocative.

The writing, in addition to its stark honesty, throws in a nice amount of gentle and self-deprecating humour and takes the reader on a journey that begins with doubt and ends with hope. May all our stories follow this path.

Impostor syndrome. Fear of failure. The twin black dogs of anxiety and depression. In a simple but moving narrative, Close shows that even those blessed with particular talents are no stranger to those internal enemies seeking to tear them down. Indeed, it can seem that, the greater the talent, the more jealously these demons mount their attacks.

What Close has given us here is an eloquent reminder that, no matter who we are, no matter what our particular blessings and talents, we are all susceptible to these destructive internal forces. Sadly, through no fault of their own, some are more vulnerable than others. When one so afflicted chooses to shine a light on his own internal struggle, it is to be admired and applauded. From such a selfless and courageous act of exposure, we all gain.

This is an important book and deserves to be widely read. And while you’re there, read the foreword and the afterword – both brilliant in their approach to this work and these important issues.