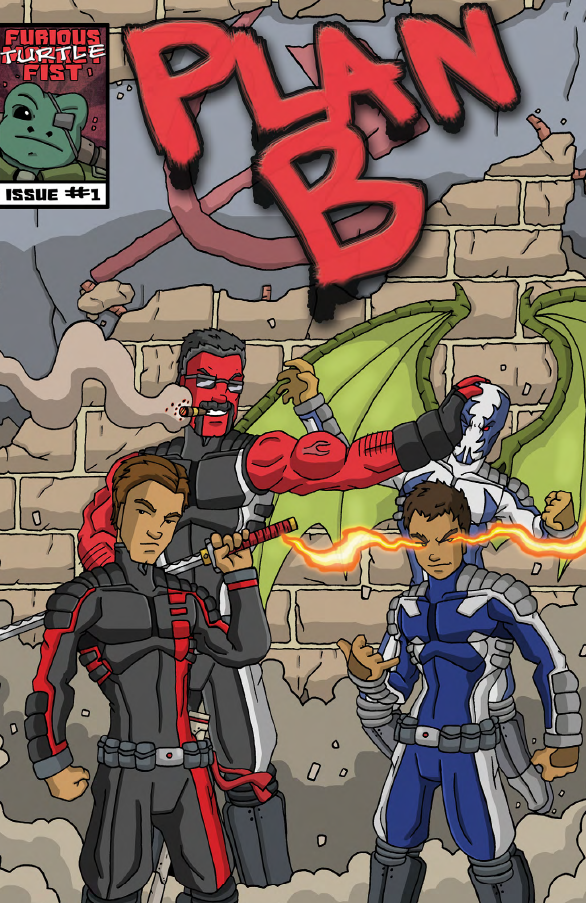 Hot off the heels of his success with The 4horsefemmes, Stuart Black is back. His next sure-to-be success story, set in the existing continuity (aren’t cinematic universes just all the rage!), stars four loud-mouthed, bumbling fools that are as colourful as they are outrageous.

Incidentally, the job also happens to get done while they’re generally influencing events and stumbling their way towards victory.

Plan B: Meet The Team

Conveniently profiled on the first page, our ‘heroes’ are:

Stuart Black playing himself as the katana-wielding, healing Ninja that self-admittedly has a skillset that isn’t overly applicable to the chosen field of superheroism.

His hand-to-hand combat, shared healing enhancement and superb leadership make him an essential cog in the team, but what he wants is more opportunity to use his blades in combat.

In a world of firepower and other tech, he has that opportunity, at most, once or twice a year. It’s very meta and draws the reflection that there aren’t enough honest ninjas in comics these days. Good stuff.

Then, there’s Anthony Malone, aka ‘The Bulk’, a fast-talking, cigar-smoking red-skinned menace with an attitude. He’s the guy that you would expect to betray the team a thousand times over for his own self-interest. So much so in fact, that it’s a real plot point in this story and though a first-panel betrayal is a bit soon, he is THAT guy.

We also have Sebastian Torress, known as Primeval. Yes, he can fly and kind of does it for show when unsure of what else to do. His most valuable attributes are the indestructible skin that sees him regularly used as a human shield to protect the others from bullets and just a vulgar mouth.

And whoowee, do we mean vulgar.

In the early pages, he launches this absolute tirade of insults/descriptive threats/unbridled rage at The Bulk to play up his seeming betrayal of the team, and it just keeps going.

It is well and truly past the point that inspires uncomfortable silence from all that would be heard and read. The swerve is predictable, but even so, one can’t help but feel the urge to go and calm themselves down. It’s hilarious.

Finally, the most powerful of the group is Scott Barclay, aka Melt. The guy with scary fire shooting eyes, not unlike a particular visor wearing mutant that we’ve all come to love.

Newer to the group and not as well fleshed out as the others, he comes across as the sensible and level headed one in the team. What’s that I hear you say? A power-wielding force of nature that isn’t a hot-headed loose cannon with obvious daddy issues! How oddly refreshing.

Together, they are known as ‘The Four Horsemen’. We know that’s the name because 2/3 of the dialogue discusses what they want to call themselves. The brilliance of it is that, as repeatedly highlighted, this isn’t even the first, second or third time they’ve had this discussion. The guys just cannot agree and cannot let it go!

What about ‘Anarchy Unlimited?’ No.

And my favourite: ‘International Supreme Infiltration Squad. Wait, the abbreviation is ISIS. Shit’.

Then, in the end, they go with a title that they openly admit is derivative of a time that already exists within their organisation!

Who are these people?

Now the mission gets wrapped up without too much bother. They take some rather stereotypical, communist-styled Russian minions, including some fancy transformer type robots.

They deactivate whatever is blocking their satellites and retrieve the stolen information. The only real hitch they encounter are the disturbing murderous babies that are one part vicious killers and another part crying, vulnerable baby when attacked.

In an oddly realistic take on an absurd situation, our heroes are not quite sure what do with the suspiciously red room themed infants. How ethical is it to attack an infant that’s trying to kill you?

They feel like they’re bad guys in the making, but they’re babies. Ultimately this headscratcher is resolved in a surprisingly elegant and realistic manner. There’s no real danger and nothing to indicate major stakes, hence, the crux of the review.

Plan B #1 Will Go Places

If you want a high stakes espionage thriller with brilliant twists and turns with an ending you never saw coming, then Plan B isn’t for you. Instead, what we have here is a sharply written, edgy, funny, outrageous book full of interesting, flamboyant characters that are as colourful as the pages they’re written on.

The artwork may seem simple and basic at first glance, but like the characters themselves, it’s surprisingly nuanced with particular emphasis on character expressions and reactions.

Plan B isn’t about incredible adventures, but rather, it’s an exploration of group dynamics in response to just utterly absurd situations. These are demonstrated in the form of fast action and sharp banter.

It’s the team you’d want to be on if you were a real-life superhero in a world of fun and adventure. It is a wild ride that will have you laughing almost panel to panel as you furiously flick through the pages to get to whatever comes next. Five stars! You’ll burn through this book and the series as quickly as possible.