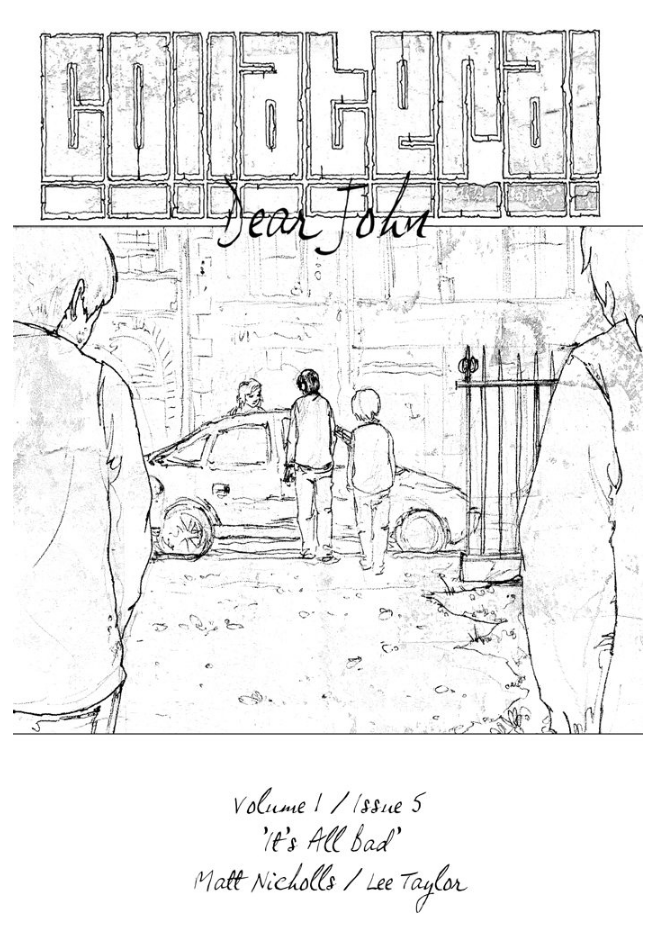 Good things sometimes need an end, and Collateral - Dear John #5 is the end to this brief inspection into the human psyche. Even with this temporary ending (it's a 12 chapter story), the chapter feels abrupt, making you ask for more.

It’s All Bad is not all bad at all. It has its good points and a few problems. Knowing that this is the last issue, especially with how it ends, makes the entire experience bittersweet.

Broken Apart: The Story of Collateral #5

Collateral - Dear John #5 is the work of Matthew Nicholls as its writer and Lee Taylor as the artist. It’s a self-published Australian indie comic book, available for free online for a time. It came out around 2013, together with the other four chapters.

The story is titled “It’s All Bad”, following the Reid Family dealing with the hardships of living in a city full of supers who don’t care about average civilians. So far, much of the painful experiences they feel come from those near them, many of which becoming collateral damage in superhero fights.

No Ending: The Writing of Collateral – Dear John #5

Collateral #5 doesn’t seem to be a natural end point for the series. The lack of closure with the story tells me that the project should’ve had an end point. From what it seems, the story was due for another 6 or 7 or so issues.

It’s All Bad seems to be an inspection into the psyche of onlookers. Apart from losing his job, John’s family is relatively unaffected by the fight between supers. Even then, they are experiencing vast side effects from the affected people around them.

Mary is devastated by the death of Gwen, especially due to being her last friend. Her faith in humanity is shaken, even with her almost infinitely positive attitude. She is unable to enact her usually positive self that glues her family together.

John, with his newfound AA group for superhero victims, is going deeper into his confirmation bias. His anger towards the supers, whilst righteous, is creating a bigger echo chamber through his support group.

How John develops from this point forward is anybody’s guess. So far, he’s going the direction of what The Boys’ Billy Butcher or Hughie. He is only getting angrier whilst gaining more sympathy for normals.

Will he succumb to violence? Or will the group put him to a better, clearer direction in life? With his generally cynical attitude, it won’t be a surprise if he eventually devolves.

The writing for this final chapter is not as particularly deep or thoughtful as the past chapters. For one, there is zero payoff so far with James and his band. He has received a mouthful about his being NEET status so far but nothing beyond it.

Breaking Impression: The Art of “It’s All Bad”

I’m not sure about the circumstances that surround this final chapter - it is not my place to speculate or talk about it at all. Going by the art quality right now, Collateral #5 has the lowest quality art of all chapters.

I started this journey with Collateral - Dear John, with no expectations, and this is the attitude that people should have with any indie comic. With that said, the darker outlines have less care in them than ever before.

It’s funny how adverse the effect of clearer lines with the quality of the panels. The style feels more draft-like now that it has better definition compared to older chapters.

The character design is less than stellar, and the background details are far less sensitive. The last five panels also feel rushed. Again, there’s zero context into what we see right now, but this is not Lee’s best chapter. Again, James’ pages feel rushed. The design is inconsistent at best and shabby at worst.

Should You Read Collateral – Dear John #5?

Should you read Collateral - Dear John #5? Other than a way to complete the series, there isn’t a ton of payoff to doing so. The story progresses very little and ends very abruptly. The art is a mess, and it stays as open-ended as it can be.

I love the entire series as a whole, and it’s easy to believe that Matt and Lee’s interest with the project waned off with Chapter 5. Even then, I’m still looking forward to the continuation of the story in the future. Will it happen? Only time can tell.