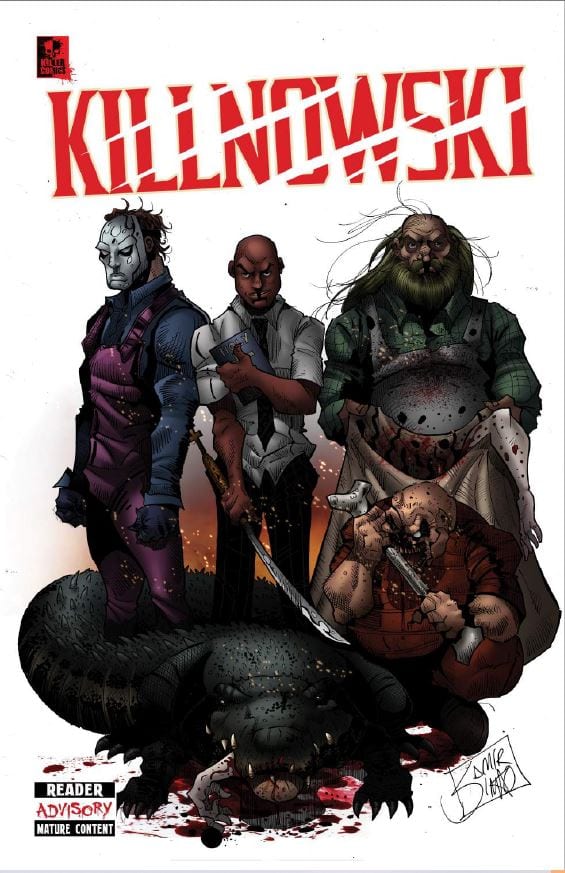 Killnowski is a brutal, in your face slash fest in the style of Texas Chainsaw Massacre and The Hills Have Eyes. Cunningham and Cassidy have crafted a fast paced story that rockets along exploring the actions and motivations of ‘Wolston’s Deplorables’. This crocodile farming family are simply trying to make ends meet during a time of drought and ‘rampant veganism’.

Simao’s art appears inspired by a mix of Humberto Ramos and Jeff Matsuda. Each character has it’s own distinctive look and the frames are full of action and menace. Jasmin Jr’s colours really pop and enhance the art.

This first issue introduces us to the Killnowski family, dropping enough references to allow us to fill in some backstory while also keeping us asking questions. It feels like a horror film and each character is defined by unique personality traits.

There is plenty of death and aggravated violence wrapped amongst the story telling but there are also some elements of suspense that leave us asking ‘what about…?’ The final panel of this issue hints at a mysterious reveal to come and suggests a new element that will further enhance the mythology of the Killnowski’s.

This title comes with a Reader Advisory – Mature Content for obvious reasons. If you like horror, give KILLNOWSKI a go – this could be the new title for you!

Check out their Kickstarter Campaign here

John is a child of the 80s and grew up primarily with Marvel and DC heroes. His interest in comics began when his father bought him a Spider-Man comic one Easter holiday many, many moons ago. John believes his love of story telling and drawing sprung from the rich worlds he immersed himself in. He is a father of five children who share his love of comics and the characters that inhabit their pages.