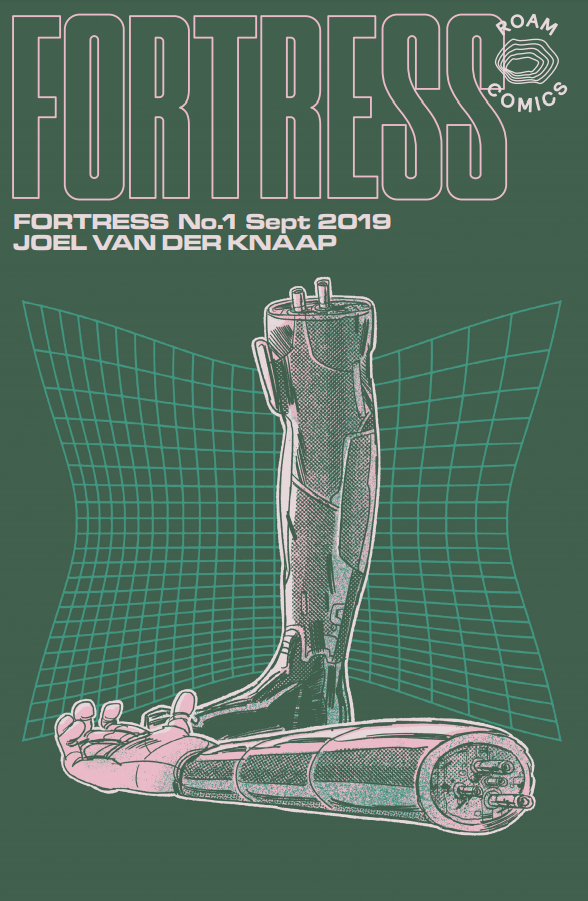 It’s hard to create unique-looking comic books these days, hence why indies always try to do something new. There are new art styles, experimental techniques, and more. They can be far and few in-between, but when you see one, they’re awesome.

Fortress #1 is one of those experimental indies that call to my indie-loving spirit. Its plot, though short, is sweet enough to intrigue and make me want for more. When there are stories out there who don’t know how to do an intro, this, I would say, is a good reference point.

The Story and Writing of Fortress: Superbly Hot, Quite Short

Awake follows the story of Itar, a cybernetic human-being looking for Caleb. He chances upon an old battle droid named Old Roy, who then reveals the current status and location of the person he’s looking for.

Fortress #1 offers a unique writing and art style that I don’t see a lot these days. So far, the story speaks to me heavily, as a fan of dystopian tales and cyberpunk stories. It carries more curiosity and intrigue compared to other titles out there.

The writing is outstanding, offering some solid characterisation for both Itar and Old Roy even if they exchange very few lines. They feel alive, which is crucial for stories that don’t want to build a big world around the characters.

Itar is your “man on a mission” style character, whilst Old Roy reminds me of the Iron Giant. He’s focused on a single mission and happily fulfilled it consistently. The reveal of who Caleb is within the story is quite intriguing too.

So far, Joel offers a short, simple story that doesn’t have enough buildup around it. I have to admit that it’s too short and I wouldn’t mind a little more worldbuilding.

Even then, the entire story is enjoyable. The pacing of the action offers value with every page. It is exciting, which is something lacking with some stories.

The Art of Fortress #1: Experimental and Working

I would start by saying whilst the storytelling and pacing of Fortress #1 is superb, the real star of the story is the art. The art style is as unique as it gets, reminiscent of certain comic books I’ve read in the 70’s. The entire comic uses only three colours, counting the off-white colour of the background.

The two true colours are dark green and a tinge of peach-like pink. The art design reminds me of Gerald Carr’s Brainmaster & Vixen, specifically the colour of Brainmaster.

To those who have little background with older Aussie comics, Brainmaster and Vixen was a story from the 70’s. You can imagine how the colours are, using a dull green and brownish orange. It seems Joel is looking to create a retro style with the comic, and it works well.

The green is used in place of black for inking, whilst the pink is there for shading. The use of Ben-Day screentone feels correct, even if it’s there from start to finish.

The line style Joel chose works pretty nice, which feels like crayons or charcoal. I can’t tell if the panels are handdrawn, but the technique is quite sweet if this is all-digital.

Even his perspectives feel like the ones I saw in older comic books, specifically Iron Man when Jack Kirby was still drawing it. The onomatopoeia in the comic book is incredible too.

All in all, the unique art style works for two reasons. First, it hides the imperfections that a one-person comic book team will create. Without the intelligent colour contrast, much of the art would look like a glorified storyboard.

Second, it tickles the fancy of people like me who like something as weird as this. It’s easy to say that the entire art is fantastic.

Should You Read Fortress #1?

So, should you read Fortress #1? Yes! Joel summed it up perfectly. The entire issue 1 is a short burst of fast-paced action, and it worked.

I’d have to read Issue #2 to see what’s about to happen. It’s totally worth it.