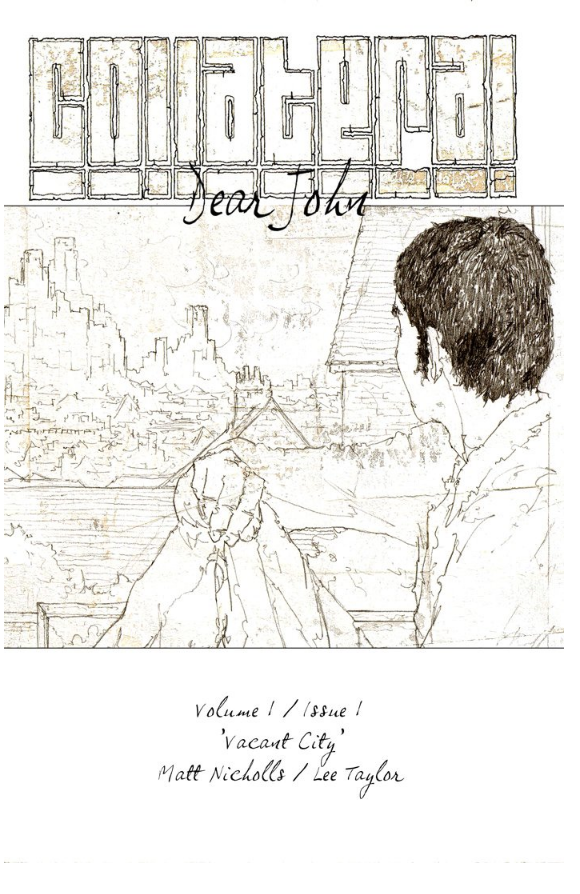 One of the most recent narrative techniques we’ve seen are worlds where the normal humans are bullied into submission by superpowered beings. We see these in stories like The Boys, Preacher, Hellblazer, and even Mark Waid’s Irredeemable. Vacant City, Collateral’s first chapter, is a great Australian comic book tail that targets just that.

Collateral - Dear John is a fun but surreal web comic that everyone should read. Whilst the art style is reminiscent of old pen and paper comic books, it hits just the same. Vacant City is our introduction to this bleak, lifeless world.

Vacant City is the first chapter of the twelve-issue webcomic written by Matthew Nicholls and drawn by Lee Taylor. As it is self-published, the comic is available from several sources online.

Vacant City opens with John and Mary’s normal family, with their kids James, Scott, and Timmy. It’s an established fact that the normal humans are having a hard time becoming collateral damage in the fights between heroes and villains.

Children admire the superheroes for helping them, but John and Mary have problems of their own. John can’t keep a job, whilst Mary is trying to raise three boys with an aloof husband. The world is feeling the toll of destroyed buildings and dying family members.

As the story goes on, Mary worries about Timmy’s well-being, but as the child comes back, something hits close to home. One of Timmy’s friends becomes a victim of collateral damage in a fight between heroes and villains.

Real People In A Fictional World: The Story of Vacant City

Vacant City is a short and sweet story, reminiscent of the opening chapters from Garth Ennis’ The Boys. Even then, there is something about Vacant City’s writing that feels more intimate than The Boys. What few pages the story has, it makes up for relatability.

Vacant City’s writing is fantastic and down to Earth. It easily connects with the readers and whilst it lacks a particularly Australian zing, it is sympathetic.

The common issue with stories that focus on normal humans in a superpowered world are unsympathetic characters. Most of the time, victims of supes can lack the proper characterisation for them to feel more than simple plot devices.

Case in point, Marvel Civil War’s Miriam Sharpe is a pointed reminder of how civilians are usually an afterthought. Even in stories where they’re front and centre, like The Boys’ Hughie Campbell, they feel off and unsympathetic. We know as readers that they’re plot devices and many treat them as such.

Collateral’s Vacant City shows us an ordinary family - dysfunctional, flawed, and entirely relatable. Matt went through great lengths to show that John, Mary, and their kids are each one of us.

Collateral - Dear John’s Vacant City will not receive awards for the best graphics. When you put it beside high production works like SHE and Bazza The Bogan Barbarian, it lacks production quality. It doesn’t deter, however, from telling a good story.

The art of Lee Taylor comprises of simple pencil art, reminiscent of a draft. The scans even seem to have the grungy yellowing from draft paper stored in closets. Even then, the simple pencil lines and use of grungy browns communicate helplessness.

In a world where you can be a stain on the ground from flying debris, the simple lines work naturally. Is the art style a little on the amateur side? Sure, but it works and does its job spectacularly.

I’ll get out of the way to say that the art style is not ugly. Lee’s ability to convey with simple pencil art is fantastic compared to others. Even then, it’s hard to get away from the lack of production quality.

If they ever go and revisit the story, it would be great if they can polish the art. I’ve looked ahead, and the quality of the comic won’t be improving a lot. For a free series that has solid storytelling, this is as good as it gets.

Should you read Vacant City and, by extension, Collateral - Dear John? The answer is a resounding yes, but that still depends on a few things.

First, it’s crucial to go into the story with an open mind. It’s easy to think that the average comic fan will likely have their initial thoughts. Once you get over that hump, it’s easier to love the story for what it is.

Vacant City is not a masterpiece. It’s a grounded story that tells it as it is: we are mere flesh bags in the face of a power that can decimate us. Even in a world with such anomalies, we still have problems bigger than the supervillain outside the window.

Vacant City is a great start to what will be a great story.