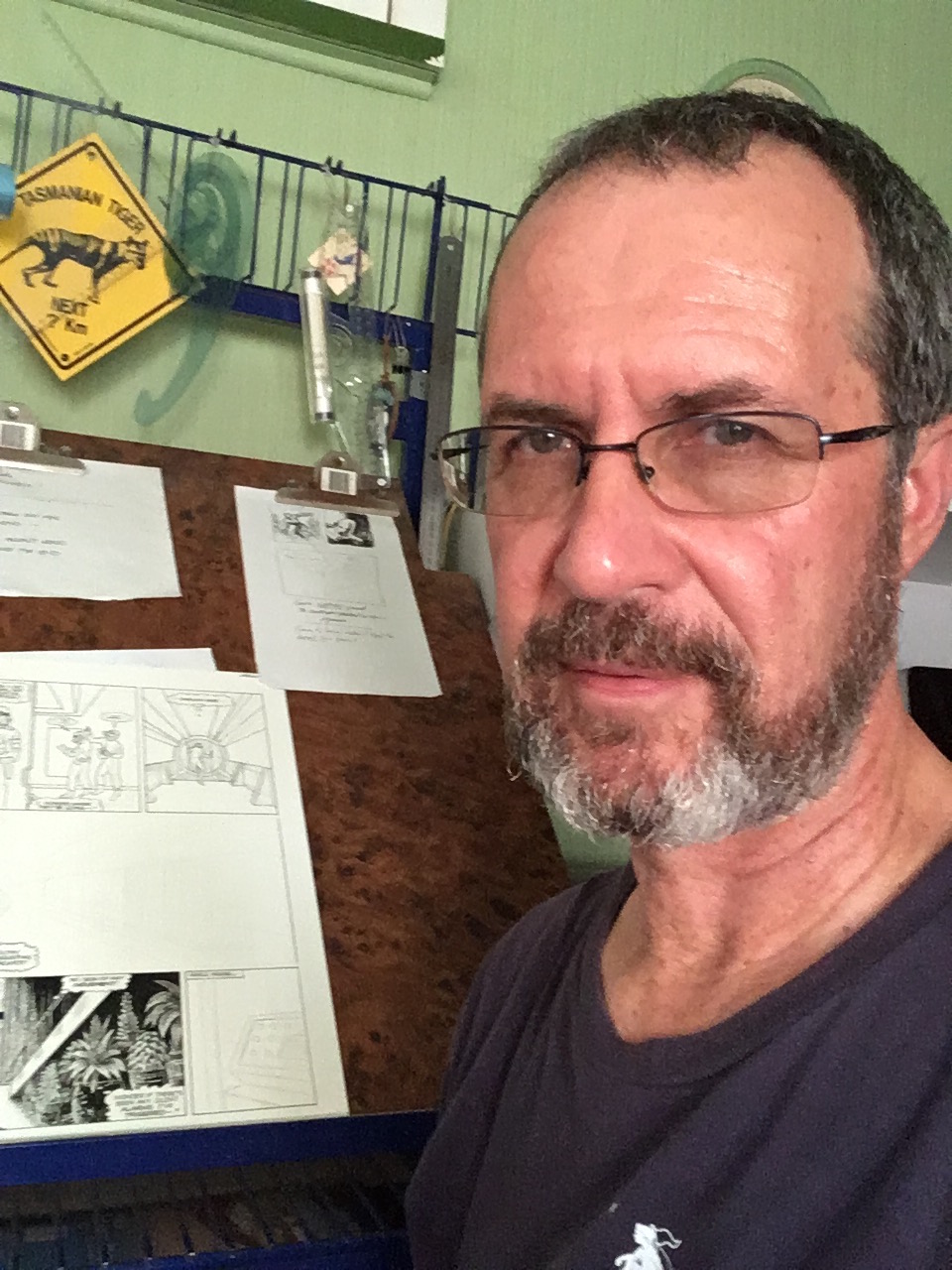 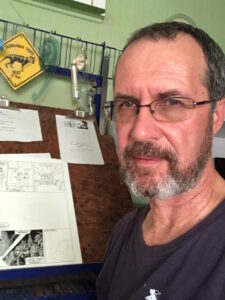 I have been drawing since I can remember – I’ve never been able to understand people who don’t. And from a really early age – probably from after finding and reading my first Phantom when I was about 7 – it’s been comic art that galvanized me the most. So much so, I didn’t do art at school because I thought it was more about potato cuts and tie-dying t-shirts, which I couldn’t stand.
Later, when working in a bank, I thought a few times about quitting and going to Art College but never did. Apart from a diploma from an ICS Correspondence Art Course (remember them?), all my work is self- taught.
For the past 31 years, I have been an Ambulance Officer in Bundaberg, but always cartooning.  I love the concept of ‘graphic storytelling’, and have endlessly read, studied and drawn comics. I count my prime artistic inspiration as the 60’s and 70’s comic book work of Jack Kirby, the illustrator and co-creator of such modern movie phenomena as X-Men, Hulk, Thor, the Avengers, the Fantastic Four, Captain America etc.
I have had comic strips published in early 90’s Australian Comics such as Dark Nebula, Australian War Stories and Southern Aurora Presents. From 2004 to 2006, I ran a monthly 4 page fantasy/adventure serial in Krash magazine called ‘The Saga of Shakah-Rune’.
In between my comic related ventures, I have done years of advertising work and book illustration, as well as telling and drawing many children’s stories in my local church, and drawing for the local Regional Council (some of the Reggie the recycling turtle pictures around are my work.)
In 2013, I was asked to contribute to the post flood Australia Day 2 celebrations by drawing in front of the crowds and over a 5 hour period drew some of Bundaberg’s real-life superheroes – the Firies, Ambos, SES, and the many Volunteers.
In 2016, I began creating covers, then full stories, for the Australian Phantom comic. 2016 was also the year I first began to exhibit work in galleries, first for Woodgate’s Arts in Spring, then later in the year having my own ‘Outcasts and Otherkind’ in the Bundaberg Regional Gallery. It was my wife who first saw the potential of my ‘comic book style’ of art appealing when framed as well as on a comic book page, and I am glad her insistence prevailed. I have featured almost yearly at Woodgate Arts in Spring and in 2018 exhibited in Maryborough and Hervey Bay.
Since then I have mainly concentrated on comic book production, writing and drawing many stories of the Phantom and affiliated characters for the Australian market. To date, I have had 12 covers and over 400 story pages published. Recently, I have also been recruited to draw more of the Australian superhero ‘The Dark Nebula’, with new stories being released in 2022.

(There are many examples of my work online at shanefoley.net)

Awards won:-
None that I know of

Work is of these types/genres:-
Superhero