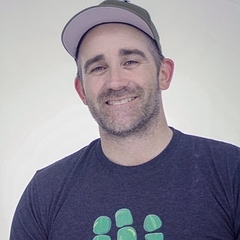 Aroha Comics was established in 2019 by Mark Abnett

In 2016 New Zealand born Mark, won a spot from thousands of entries in the inaugural Millarworld* talent contest.
His story “Mindy’s ABC’s” featuring Hit-Girl was printed in the Millarworld 2016 Annual and published by Image Comics.

He is also co-creator of “SCHISM” with Glaswegian Artist Chris Connolley a groundbreaking story which manipulates the page with an infusion of Memento meets The Handmaids Tale meets Atomic Blond
​
Most recently he has been collaborating with Polish Artist P.R Dedelis on the title “THIS LAND”
A Story based in a future New Zealand that brings the best elements of Disney’s Moana, Marvels X-Men, and Neil Gaiman’s American gods together in an all-new melting pot
​
Mark is currently based in Dumfries in the south of Scotland
​
Our story begins with our logo.
The open palm indicates honesty and openness
The Koru represents new beginnings, growth, and regeneration
Aroha translated from te reo Māori means love and empathy

*Millarworld is a subsidiary of Netflix and responsible for such creations as Kick-Ass, Wanted starring Angelina Jolie and The Kingsman series of films.

Work is of these types/genres:-
Superheroes, Sci-fi, Myth and Legends, Fantasy makers and world breakers!