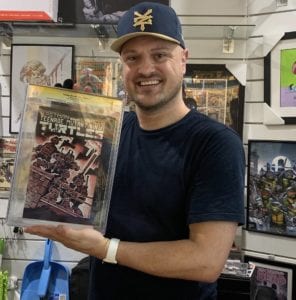 From a young age Sydney based illustrator, Jamie Johnson has had a fascination with comic art. A passion he has parlayed into a career as a comic book cover artist.

Primarily known for his work on ‘The Phantom’ he has illustrated over 20 covers published in Australia, USA and Europe, was the lead artist on ‘The Phantom: Treasures of Drakon’ board game, has contributed art to trading cards, colouring books, and more recently The Phantom Bushfire Appeal ‘Phundraiser’ publication licensed by Kings Features.

Similarly, Jamie has contributed to the ‘Australia Burns’ anthology, which has raised over $20,000 with 100% of the proceeds going to the bushfire relief effort.

Jamie has also fulfilled a lifelong ambition to draw the Teenage Mutant Ninja Turtles with a variant cover for IDW Publishing’s milestone issue #100.

When Jamie is not illustratiing dynamic cover art, he is running comic art workshops for kids in Sydney’s Hills District”

Work is of these types/genres:-
Modern Superhero Cover Art

The Phantom: The treasure of Drakon’ board game