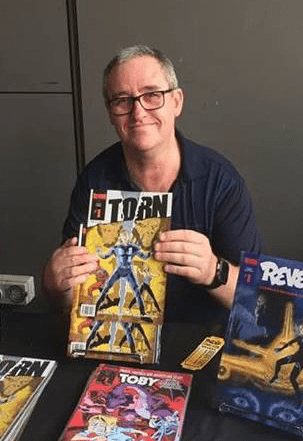 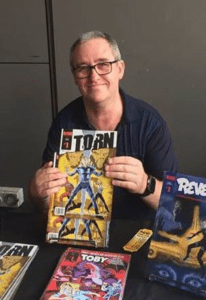 In 2009, picked up a new role with using social media in emergencies with the Black Saturday bushfires, followed up by also similar role in 2011 QLD Floods, Vicfloods, Christchurch earthquate and Japan earthquake/tsuname/nuclear meltdown/everything EXCEPT Godzilla situation.

Made a return to the Australian comic scene in 2016. First with a four-page short story for Tree Paper 2, then working with artists Peter J. Lawson and Dana Lawson on a story in Reverie Trade Paperback 1 (N.E.D).

Tasked by Gary Dellar with writing the Torn comic, taking concepts created by Gary and turning them into a whole new world.

Also about to be creator/writer updating and extending an older concept as…Shomer. This series will interweave with N.E.D.

Loving the return and producing my best work to date. Have no intention of quitting writing.

Work is of these types/genres:-
Superhero, Mystery, Action