The Dean Rankine is a Ledger and Stanley Award winning comic book artist, illustrator and writer best known for his work on Simpsons Comics and the new graphic novel The Riverdale Diaries : Starring Veronica (Archie Comics/Buzzpop).

He’s contributed work to; Rick and Morty and Invader Zim #40 (Oni Press), Oggy and the Cockroaches #1, #2, #3, Oggy New Year – One Shot, Underdog and Pals #2, #3, Rocky and Bullwinkle : As Seen On TV #1, #2, Robonic Stooges #2, Laurel and Hardy Christmas Follies #1 and Laurel and Hardy Meet The Three Stooges #1 (American Mythology), The Hellboy Winter Special 2016 (Dark Horse), Skottie Young’s I Hate Fairyland #13 and The Untold Tales of I Hate Fairyland (Stupid Fresh Mess), The Beano and The Dandy (DC Thomson), Zombie Tramp Does the Holidays and Cougar and Cub #5 (Action Lab) and Australian MAD Magazine (Next Media).

Dean is the illustrator on the Timmy the Ticked-Off Pony series – written by Magda Szubanski. And illustrated the Funny Thing Happened to Simon Sidebottom series and On The First Day of School (Scholastic), The Mad Scientist (Pearson), the Stuff Happens series, A Lot of Stuff Happens omnibus and Morris Gleitzman’s Extra Time and Help Around the House (Penguin Random House) Pac-Man : The First Animated TV Show Based Upon a Video Game (BearManor Media) and Superhero Therapy For Anxiety and Trauma (Jessica Kingsley Publishers). He also contributed illustrations to Bartman: The Superhero’s Handbook (Matt Groening Productions).

Dean has written for The Phantom #1908 (Frew) and Decay #21 (Dark Oz) and wrote and illustrated Baby’s First Exorcism, Poetry of the Geek, My Dad is an Animal (Popsicle Press) and Be Batman : The Unofficial Superhero’s Guide to Overcoming Adversity (Shooting Star). He is the co-creator of the UpBeat Geek mental health card set with Dr. Janina Scarlet (Pop Culture Hero Coalition).
And (would you believe) he’s one of the massive group of artists who currently hold the Guinness World Record for the ‘Most Contributors to a Published Comic Book’.

Dean is the creator of Aussie Comic Book Day – an Australia wide celebration of local creators and their work (on the 3rd Saturday in November). He is a Committee Member with the Australian Cartoonists Association and ‘Role Model’ with Books in Homes (A national program that provides access to books-of-choice to children and families living in low socio-economic conditions) – https://booksinhomes.com.au

He’s one third of the Ogre’s Basement Podcast. And presented the BADime video series where he drew “bad” anime for Madman Australia.

Work is of these types/genres:-
comic artist, cartoonist, illustrator

Laurel and Hardy / The Three Stooges

Oggy and the Cockroaches

The Perilous Plights of Peter Pumpkinhead

The Untold Tales of I Hate Fairyland 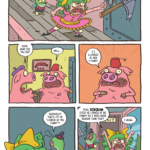 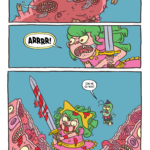 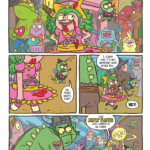 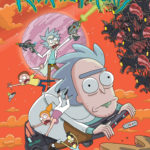 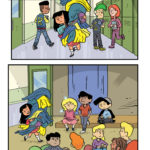 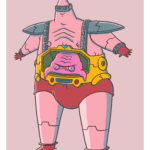 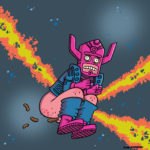