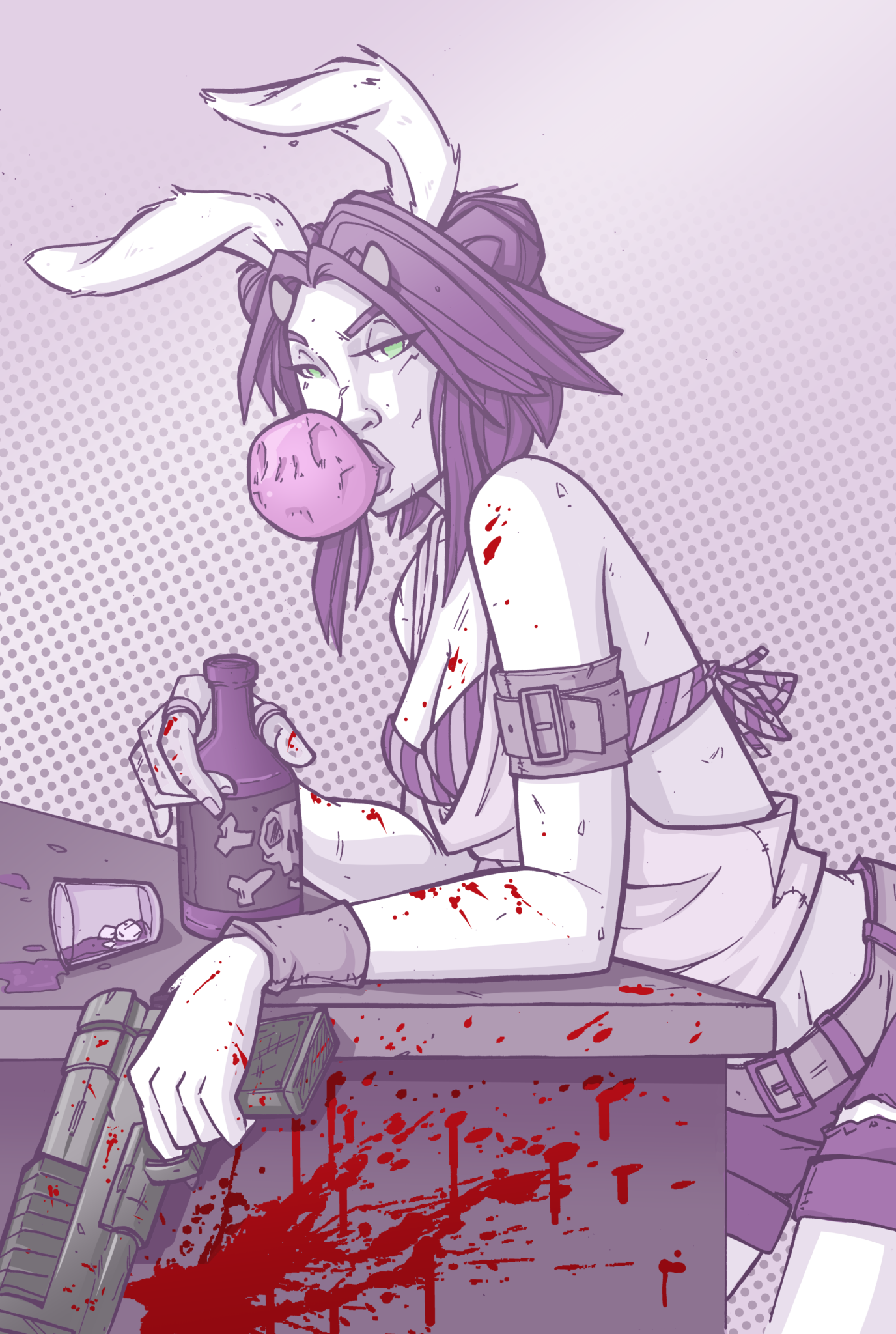 Lana Leuka and Lauren Marshall are in da house Shane (00:03):
Hello, Shane here from ComX, from the ComX Calendar Project that we’re doing on Kickstarter soon. Um, I’m just speaking to Lauren, uh, to talk to her, to talk to her about her favourite pieces that she’s done.

Shane (00:49):
Yeah. So same questions again, I guess. So, so what do you love about this one so much? So apart from the fact that it’s you,

Lauren (01:00):
Um, so, well, obviously it’s Lana, so she’s my original character. Um, she, this particular piece was the cover of the first issue. Um, the original cover. And I think that is something that’s gonna stick with me for a long time because publishing something for yourself is huge step. Anybody that does it is absolutely phenomenal. Um, and I know how much work goes into it. So it’s more a reflection of understanding that, um, and how much work that goes into it. So looking at that piece, I realize that I’ve created something that was whole, um, I think that’s why I love it so much because it’s a milestone piece.

Shane (01:45):
That makes a lot of sense. Yeah. So was there anything that inspired you for this particular set up? Thank you.

Lauren (02:00):
Uh, I don’t know if you’ve seen Babs Tarr um, her Instagram handle’s @Babdraws. Um, she, her stuff, she did a lot of the bad girl, the new bad girl stuff style, so fluid, so organic and sexy, like really just hones in on the female figure. But even like guys, she just really just pushes it forward and just looks so fluid. And she really pushed me forward in terms of studying anatomy. And I think that was a huge inspiration for this one. Um, but this is sort of just like a, um, like I said, it was a milestone piece, right. So it just really got me to the point where everything that I’ve learned has become this piece in terms of like the colouring. Obviously it’s quite a monotone piece, but it was more just understanding what source or anatomy or, um, inking, um, composition. Um, and I think that was the best part about it.

Shane (03:07):
Oh, nice. Yeah. Well, so it’s a very nice piece. So it worked out very well. I’m a big fan of that cover, so yeah, I’m glad I actually got that cover. It sounds like there was more than one cover, so yeah.

Lauren (03:22):
Yeah, that was true. Actually got, um, a variant covered by, um, his Instagram or just general tag is @sketchcraft. Um, Rob, he was incredible. He’s been a huge mentor for me. He’s situated in, uh, America. I can’t remember exactly where, but the guy is absolutely legend, absolute legend, and he’s done work for Spyro and Crash Bandicoot recently. Um, and so he did the variant cover for Lana and, um, it was just great. It was just really nice experience working with him. Um, and just seeing a different artist perspective in terms of someone who working professionally in the industry was really nice to see too.

Shane (04:07):
Oh, cool. Very nice. Um, I guess my next question would be, um, were there any challenges to making this piece?

Lauren (04:19):
Nerves, I guess? Yes. Um, having, knowing that it was going to be the first cover of the full series, right. So you got to make sure that it kind of creates an impact, um, and people understand what the genre is, what the character is, um, why all these things that you got to think about. So I think it was more nerves that I was trying to make sure that was correct, but I… Look when I get an idea, I just do it. I just get it out. I don’t really hesitate. Um, whilst my brain might be love firing in my head, like absolute fireworks, but I, I just went with it and, um, I follow my instinct I guess. And I think sort of just really emphasize it well, not emphasize, but it just boosted my confidence in terms of like trusting my instinct. Um, and I think that was the best part. Yeah.

Shane (05:13):
Yeah. Very good instincts. Yes. So did you learn any new techniques to get this done?

Lauren (05:24):
I wouldn’t say new techniques, but, um, refining techniques definitely about composition because a lot of people forget about how much space is required on a cover, uh, for doing the title, um, doing, uh, people that are involved, like writing their, um, names on there. Um, any other stuff that’s sort of related to the comic book itself, like barcodes, stuff like that, that you kind of forget about. Um, so it’s really sort of, even before you start it, you got to kind of visualize where that’s going to go then work around that.

Lauren (06:03):
So sometimes it’s hard on the eyes as you see all this dead space at the top or down the bottom and you feel like you have to fill it, but in this instance you don’t because it ruins it. Yeah. So that, it’s a hard thing to like, if you’re so used to creating a composition that’s so full on and full of like golden eggs and then yeah. It’s like, it’s a good thing to learn for future. Yeah.

Shane (06:29):
Yeah. Definitely. They, a lot won’t even follow those sort of things, but then again, I’m not really an artist, so yeah.

Shane (06:43):
Um, with this piece, what do you think would most connect with your audience

Lauren (06:48):
Given that it was the first Lana cover, obviously. Um, but once again, it was another, just like the Spiderman piece. I think it was like another milestone. Uh, and then me taking, like for years, I’ve dropped little nuggets about Lana, um, whether on Instagram or Facebook or whatever, social media, just little sketches or ideas. I kept saying, look, I’m going to do this. I’m gonna do this. And years went and years went and I didn’t do anything about it.

Lauren (07:15):
Then it got to the point that I actually released the Kickstarter and, um, created the piece. And I think, um, obviously the cover is the first thing you’ll see on the shelf. It’s the first thing you got to see on an online store? I think that’s why people would resonate with this is because they know that that is issue one that is the beginning of Lana. Um, and they’re always gonna look at that purple tone that I’ve used. Like her signature color is purple. And when they see like any pastoral purple that sort of like off purple, they’re going to be like “that’s Lana”. Um, and, and they’re going to think straight up, like that’s who it is. That’s Lauren that’s Lana a hundred percent. So I think that’s why.

Shane (08:11):
That was Lauren’s Lana Leuka. Hopefully Lauren will be revisiting her in the calendar. If you want to find out for yourself for just for your interest at ComX.link, just go there and register your interest for the prelaunch page of Kickstarter. Thanks for your time. Have a good day.