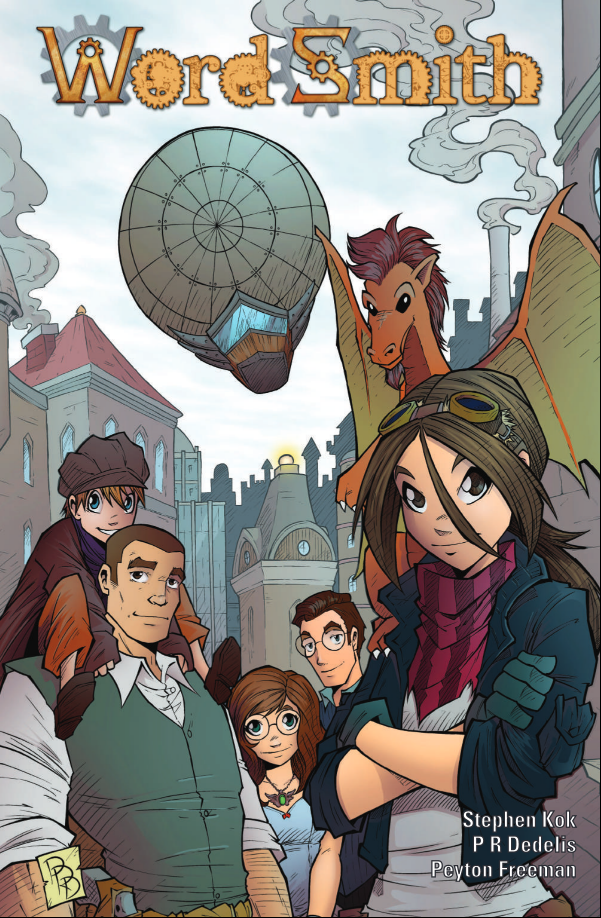 Steampunk stories can become a dime a dozen, but not in Australian comics. They’re quite rare because the steampunk subgenre is not particularly tied to the local culture. This makes me enjoy what occasional steampunk story I find, with the likes of Word Smith.

Sigmate Studio’s Word Smith is a good, fun story with a great human side to it. It is a story of the ties that bind and how a word can change everything - sometimes for the worst.

Can Words Break You? The Story of Word Smith

Word Smith is an Australian comic book story created and written by Stephen Kok and illustrated by P.R. Dedelis, with colours from Peyton Freeman. The story follows Victoria, a “wordsmith.”

In-story, wordsmiths create items made from their magic, and it can easily influence the mood of normal humans. Victoria is known to be the best in the city. Bonnie, a baker and a wife, visits to create a birthday gift for her husband.

As Victoria made the word “dream,” Bonnie’s husband realised that there is more to life than their family bakery and sets off on a journey. As the mistake happens, Victoria and friends go on a wild goose chase to convince Bonnie’s husband back.

As the story goes, Victoria creates different connections with a variety of people. She meets orphans, airship pilots, and people wishing to find bonds that they lost.

As she moves towards correcting her mistakes with her words, she realises there’s more to people than one word. Victoria will learn the value of bonds and how it dictates how the world moves around her.

The Ties That Bind: The World of Word Smith

Word Smith is quite a complete and compelling story. It trudges the edges of family, bonds between people, and how people connect to each other. There are multiple stories within the central plot, which makes it a good, solid adventure.

The plot of the comic book is clear. It presents a goal, some purpose, and how people connect through adversity. As the characters test the limits of their willingness to deal with emotions, they learn more about the people around them.

The central McGuffin in the story is Victoria’s smithing skills. She is among the many, and likely the best in this steampunk city, who can create “words”. These words act like the best way to relay somebody’s true intent without having it misconstrued.

Even with such a mind-altering ability, they don’t always have the desired effect. Communicating clearly does not always mean you get what you want - only that the other party understands what you say with utmost clarity.

In line with this, much of the story revolves around Victoria finding out that Bonnie’s husband reacts differently to her words. Even if he clearly understands the message, he does not comply, but rather follows through with what he wants.

The only issue I have with the story is the lack of focus and the level of contrived scenarios happening. Even with goals and plot, the story moves at a weird pace. It’s slow enough to feel like it’s crawling but fast enough that there’s not a lot of material to work on.

There’s also not much world-building. Nobody explains anything - the name of the city or even what a word smith does. The story implies that the reader will get everything, which leaves too much to the imagination.

Crisp and Clear: The Art of Word Smith

The art of Word Smith is crisp and clear, clearly showing off the wonders of a magical, steampunk world. The design is reminiscent of ‘90s to early 2000s cartoons, with the styles of Winx Club, WITCH, and other Gaumont Animation designs around the era.

The style itself is versatile, giving off a hybrid cartoon-anime art design. It also works well with the colour and the background art. Plus points to the art team’s backgrounds too.

A lot of times, many indie comic artists are great comic designers but bad background designers. These show in a few comics, but Word Smith has great backgrounds. The world looks alive, which is why the lack of world-building is lamentable.

Even then, the art is the strongest suit of the entire comic. It is consistent from start to finish, and it’s clear that care and precision was a priority.

Should You Read Word Smith #1?

Should you read Word Smith? The answer is clearly yes, especially if you want a good, complete story. It is a story catered mostly for young readers but it’s family-friendly enough to give to anyone.

Word Smith is a nice, clean story with an Aesop at the end. Depending on your preference for stories, it can be “one of the best children’s story” you’ve read or the “most squeaky clean” tales out there.

For people who appreciate good, clean stories that feel like it can get a serialised Saturday morning cartoon, Word Smith is for you. People looking for more action would need to look somewhere else. I’m looking forward to the next adventures of Victoria and the people around her. How can her words change the lives of those around them? We can only hazard a guess.