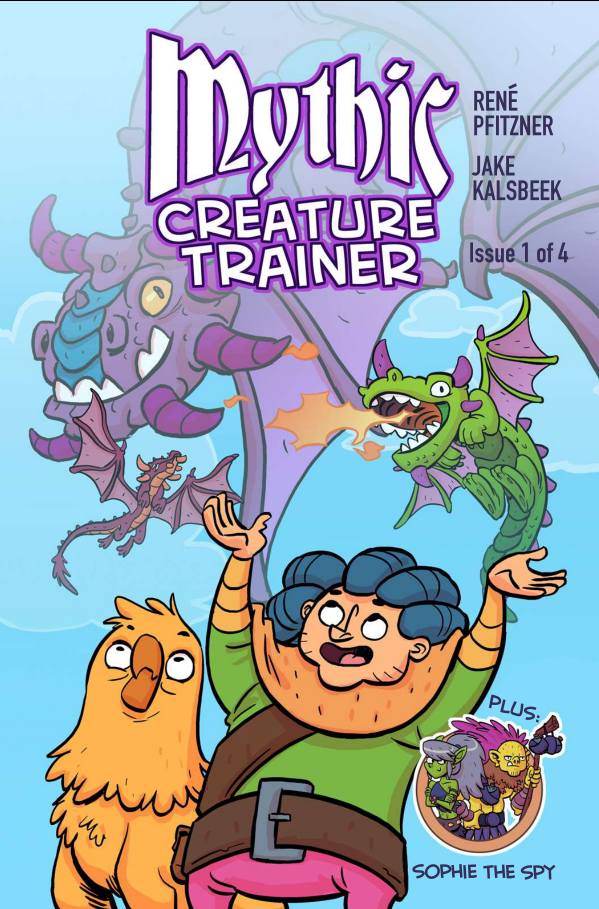 Many think the job of a medieval monster trainer should be easy. Much like any job, it has its many stressful situations but it should also be fun. There are also situations where you screw up and everything goes wrong.

Mythic Creature Trainer is a dark tale wrapped in a lighthearted story. Don’t let the beautiful child-like art and the brightly coloured characters fool you. This is a devious story that is super entertaining but creeps up on you when you least expect it.

Saboteur at Work: The Story of Mythic Creature Trainer #1

Mythic Creature Trainer #1 is the first issue of self-published by Rene Pfitzner. Rene Pfitzner is also the writer for the story, as well as the artist.

MCT#1 follows the story of Ulrick in a fantasy medieval setting, working as a trainer for Mythic creatures in the royal stables. He, together with the goblin Kevin, works at the stables to unleash the potential of the Mythic beasts.

As he starts his day, Ulrick introduces us to the common trappings of stable work. He also works immediately trying to unleash the hidden talents of the creature under his care. Kevin, ever the sourpuss, points him to a different job.

Kevin tasks Ulrick to create a potion for an ailing dragon, which the latter takes on diligently. As they give the potion to the whelp, the supposed healing properties makes it mutate.

Everything doesn’t go well for Ulrick.

A Dark Story Under A Blast of Rainbows: The Writing of Mythic Creature Trainer #1

Mythic Creature Trainer #1 is a solid comic book that has a great narrative from start to finish. The plot progression is clean, and it puts on a clinic on how to write a superb first issue.

I don’t have a ton of history reading Rene Pfitzner’s work, with only Sneaky Goblins as my other reference. With that in mind, I can confirm how good Pfitzner is with creating a functionally flawless story.

His plots are always airtight, with a straight story that barely branches out to other unimportant side stories. Even then, he builds the world enough to create a living, breathing story.

The writing is superb, with very little wasted dialogue between characters. Nobody talks when it isn’t necessary, and yet the characters are no less alive. He also follows tropes to a tee, creating a surprisingly deep story.

Even then, I must admit that the tone of the story is not as colourful as the art. The narrative undertones talk about potential treason, manipulation, deception and rebellion. Sure, it’s not a new trope to invoke, but there’s a lot of death and destruction in this story’s future.

There is potential for the other characters too, especially with the coy and naive Ulrick as the main character. I would also want to see Kevin’s redemption arc, together with some development of the other companions.

If anything, Ulrick would have to rely on others to make sure he doesn’t become a nuisance to everybody else. He has the potential to be a useful character but only if he stops being a pushover.

Too Good, Too Consistent: The Art of Mythic Creature Trainer #1

The art of Mythic Creature Trainer is similar to how Pfitzner writes his stories: they’re high-quality. The art is reminiscent of 90s French cartoons, using strong outlines to project a cartoony feel whilst using a myriad of colours.

Every panel evokes life and movement. There is motion where it counts without relying too much on motion blur. The background art is also among the best I’ve seen and definitely top 3.

A common method that artists do to save time is to not create background art when possible. Some even rely too much on depth of field to compensate. Pfitzner is different.

He uses good background art to tell the current situation. He also makes fantastic use of reference angles to create a superior perspective. Side characters are also given the same level of quality as foreground characters, making the world lived-in.

If there’s any downside I can see, it comes from the panelling. Whilst the panelling is consistent, it’s a little bit too consistent. All situations happened inside a rectangle or a square panel.

The lack of variation makes the plot run at a consistent speed every time. There is very little rise and fall - crescendo and decrescendo.

Should You Read Mythic Creature Trainer #1?

Should you read Mythic Creature Trainer #1? Yes! The story is a fun opener for what I feel to be quite an enjoyable story ahead. If you can get over some minor hiccups, the entire comic has a lot of potential.

It is a colourful story that offers several layers, depending on your age. For younger readers, it will feel like a wholesome, colourful tale. For adults, it is a story full of treachery engulfed in a clad of rainbowy art.