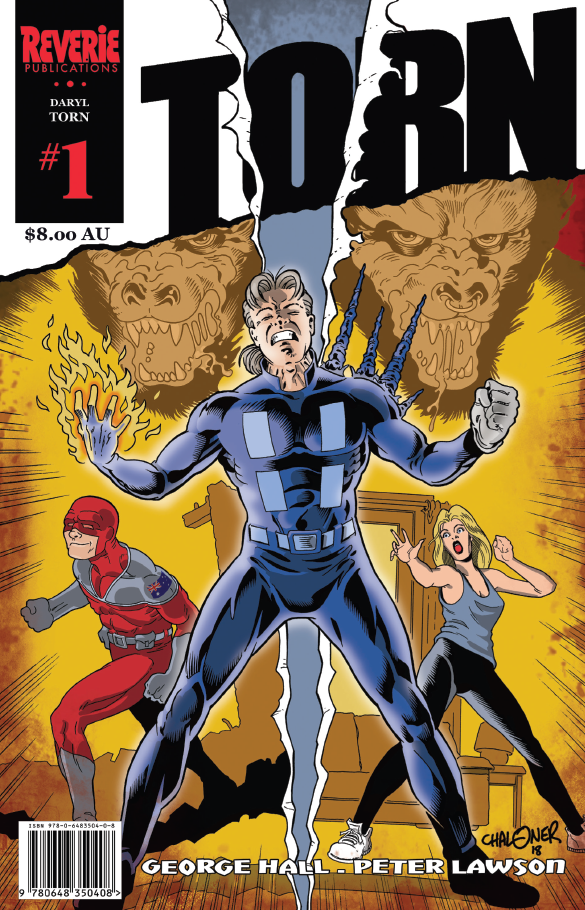 In a world where heroes and villains are hyperheroes and hypervillains, there’s a reluctant neutral that is the strongest among them. It’s hard to like villains who only care about themselves or to stay in love with heroes deluded with their own acts.

Torn #1 is a story that skirts the neutrality of it all, and decries the protagonist-centered morality that we all know. It’s also a fun story that works because of the character flaws our protagonist has.

The Writing and Story of Torn: Nothing About Hero Insurance

Torn #1 is an indie Australian comic book published by Reverie Publications. The story is created by Gary Dellar, written and lettered by George Hall and art by Peter J. Lawson.

The story follows the titular Torn, a man with the power to mimic any power he sees. The story starts with him trying to tame an out-of-control shapeshifting ability he got. His caveat, from what it seems, is he mimics the power’s downsides too.

The story of Torn #1 is a weird but action-packed story that tows the thin line of neutrality and what it means to be a hero. Torn is not a hero in the most traditional sense of the word. Whilst he fights bad guys on the regular, he also dislikes how the heroes operate.

A specific scene in the story talks to me, as he and Red Gum, another hero and a transplant from Toby and the Magic Pencil, fought an invisible, dimension-hopping villain. In that, Red Gum’s brash heroism was turned into danger for the public.

Red Gum was destroying property left and right. He even put commuters in danger by having the fight near public transport. Torn hated every second of it, which made sense. It reminds me of the obscure webcomic Collateral - Dear John and its sober look into supers.

Torn never wanted to be a part of the heroes. When readers look at characters like The Avengers, Superman, and others, the city always suffers. Heroes fight like there’s some superhero insurance ready to pay for all the damages. It’s always a question of morals when the heroes stop caring about the everyday man.

The writing of Torn is super good. The most stellar part of it is pacing, making it easy to read and even easier to digest. The scenes are never overdone, and the action interweaves nicely with the story.

The story is also quite mature. It asks the readers to think without being too “in your face” about it.

The Art of Torn #1: Peter Lawson Doing It Right

The art of Torn #1 is among the best I’ve seen in years. I understand that the art is from 2018 and they polished it over the years, but the style is definitely Peter J. Lawson. The unique realistic proportion and the inking technique is as good as it gets.

The inking technique Lawson uses is something original to him. The outlines are thick, feathered, and heavy, which created a level of gruff that fits the world of Torn. All character designs are also strong and imposing, with quite the masculine touch.

Every character is dynamic too, but somehow I feel like they need more motion. The panels lack a distinct sense of motion, whether it be motion blur or motion lines. I admit, however, that this is as minor as it can be, considering how good the art is.

I enjoyed the fight scene the most, with a good, balanced design. Red Gum’s drawing is beautifully designed, with Torn working great with his brooding looks. The cane toads are also some of the most muscular I’ve seen.

Is Torn #1 a must-read? Yes, it’s a great story with both great art and solid storytelling. It’s a curious tale for the ages, and the makings of a great story for the future.

Give the story a spin. It’s worth every dollar.