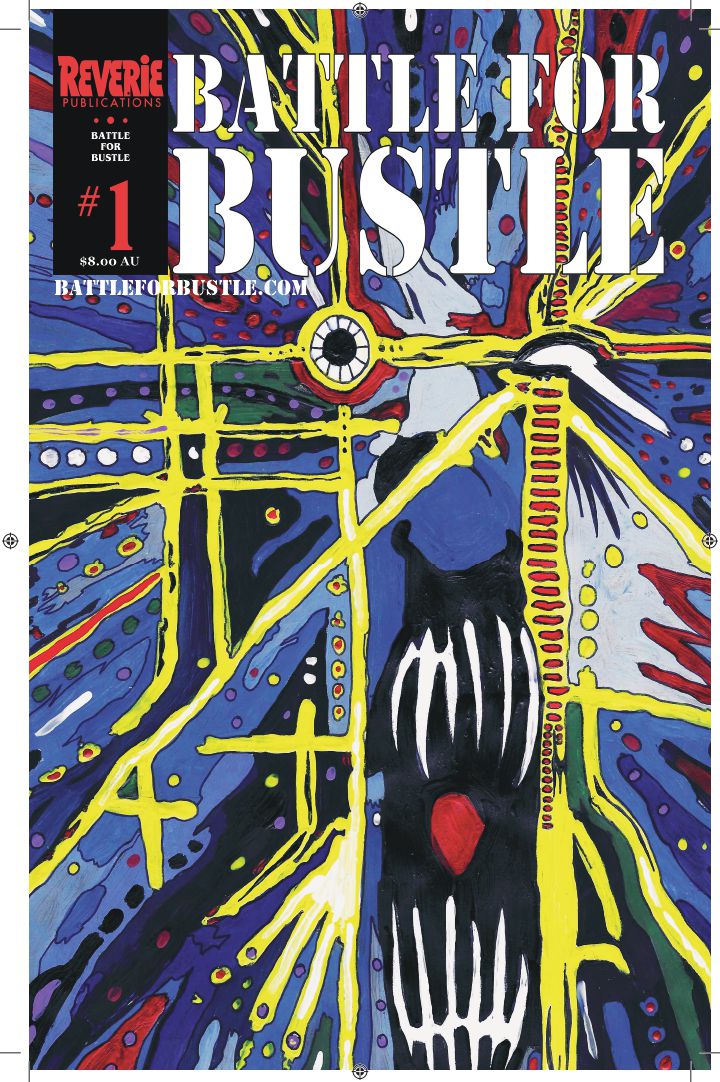 Battle for Bustle Chapter 1 is a rare find - among the first indies that hooked my attention since starting ComX.

Battle for Bustle is a unique take on the usual dystopian setting. At its worst, it is a sadistic reimagining of George Orwell’s 1984. At it’s best, it’s a distillation of what it is to be human, and the bleak hopelessness of a world plunged into nothingness.  A world where sunlight is a luxury few know.

Dystopia and Disenfranchisement: The City of Bustle

Battle for Bustle Chapter 1 is written by and art by Leigh Chalker and published by Reverie Publications. The same publication house also handled Toby and the Magic Pencil, but both stories are vastly different from each other.

Battle for Bustle follows the story of an unknown test subject later identified with his identicode, 091177. 091177 is a weird existence, seemingly implied that he is functionally immortal. He can’t die from any injury but can feel all the pain of the inhumane testing.

As the tests go deeper into his mind, readers get into a flashback of his life in the city of Bustle. Bustle is a classic Orwellian city state where people are put into a caste system.

Lowly drones become the subject of ire, control, and abuse among higher class citizens. During this memory 091177 seems to snap, standing up for himself in an instinctual manner and raw basic actions follow.

Like any dystopia, the “man” tries to break him and loses the fight, which in turn seems to have inspired people to stand up. In a profound subversion of common rebellion tropes, the state uses the event to wrest heavier control of the people.

Battle for Bustle Chapter 1 is a dark, evil story of the moral depravities of humanity. It talks about the lengths that people will go to disenfranchise other people. The story is as dystopian as it gets, which is not for the faint of heart.

Battle for Bustle is rife with gore, dismemberment, and abuse, but it’s not distasteful in any way. The entire story is a tale of disenfranchisement, shifting power balances, and the loss of innocence among people.

What makes Battle for Bustle compelling is how the story starts from the end and goes back to the start. At this point in the story, we’re not following a hero who’s beginning his journey of redemption. There’s no redeeming anyone in this hopeless world.

The story follows 091177’s history - how he got here in the first place. We see someone broken and at the end of his rope, being brought further into the void.

What makes Battle of Bustle jawdropping is its unapologetic treatment of sadism. The entire world of Battle for Bustle somehow is lusting for the blood of others. Everyone from 091177 to the upper echelons of the city have an inherent bloodlust in them.

The bloodlust becomes a prominent theme around the latter third of the chapter too. What little release of frustration people get becomes more important than success. They want others to feel their pain, which makes them edgier than most.

Circus of Freaks: Picking Apart the Art of Battle for Bustle

The first chapter uses naked pencil strokes and inked everything in black, white, and greys. The pencil art is beautiful in its own right, the hand-drawn art expressive in its scratchy presentation.

At the same time, the style is “ugly” because nobody in this world is innocent. From 091177 to his family to their oppressors, not one has any beauty left in them. Even the children shown in the story are overzealous caricatures, reflecting the ugliness of the story itself.

Battle for Bustle Chapter 1 is a Must-Read

Battle for Bustle Chapter 1 is not for the optimist. It is bleak from start to finish, with no rest for the weary or the wicked. Whilst there is more to the story in the upcoming chapters, the story clarifies that there’s no happy ending for anyone.

The story is not a classic, which makes it a better story than most. It goes to a spectrum of darkness that only a few comic writers are willing to venture, even for an indie.

People may not buy this, but those who dare try can expect a story unlike they’ve ever seen before. For a person who once read comic books almost daily, Battle for Bustle Chapter 1 piqued my interest more than anything a AAA publication usually makes.