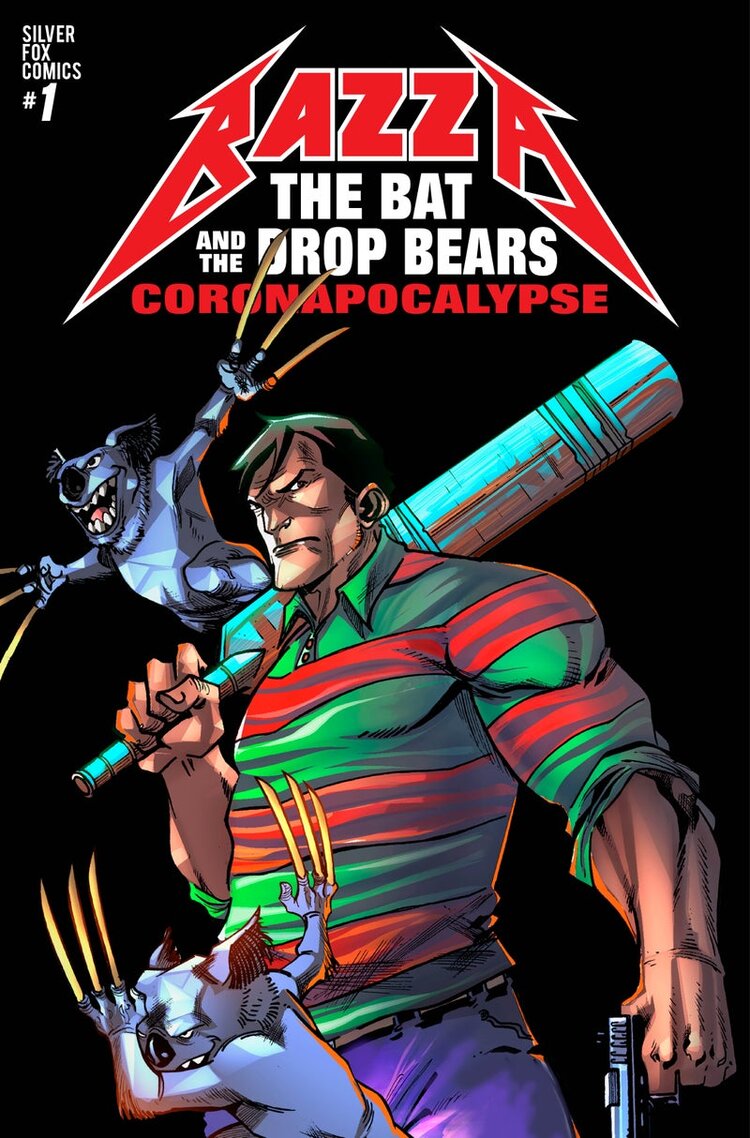 With the Coronavirus attacking, it’s now harder to do some monster-killing in fantasy-land Australia. With that said, it can’t stop Bazza The Bogan Barbarian from beating them to a pulp.

Bazza The Bogan Barbarian seemingly has a new series called Bazza, The Bat, and The Drop Bears. Does it hold up to Bazza’s previous adventures? Let’s find out.

Bazza and the ‘Rona: The Story of Bazza, The Bat, and The Drop Bears #1

Bazza, The Bat, and The Drop Bears Chapter 1, titled Coronapocalypse, is the first chapter for the series of the same name under the Bazza The Bogan Barbarian line. The story is published by Silver Fox Comics.

Coronapocalypse is written and directed by Don Ticchio and Sorab Del Rio, with Eder Messias handling the art. Edwin Estrada is in charge of colours.

BTBTDB Chapter 1 still follows Bazza and his wife Shazza Kelly during the coronavirus apocalypse. During the time, an event takes place that pushes Bazza to the brink of depression, pushing him to question his dedication to his monster hunting craft.

Coronapocalypse is a stunning sequel for Bazza The Bogan Barbarian. It’s a simple action story that gets far from its roots whilst growing into a better comic. From the characterisation to the plot progress, the story is tightly-knit but still keeps all the fun.

Sorab and Don are doing a good job in the overall general direction of the story. It shows a lot of good things here and there, together with a few things to improve.

For starters, the story is paced nicely. It has the right speed to which the plot moves, and it’s easy to stay with Bazza from moment to moment.

Bazza’s characterisation is not out of character at all. Whilst he’s portrayed as emasculated by his wife Shazza at times, it’s good to see he’s not all about the action. He is, but he is not afraid of showing his soft, caring side too.

Shazza Kelly is getting quite the amount of spotlight this chapter, which is about time already. She’s the secret badass of the entire story and can even be the protagonist of her own comic book series.

The only issue I have with the writing so far is how Shazza “peps” up Bazza. Whilst I don’t particularly mind it, the “man up” dialogue is slightly on the abusive side too much.

Sure, the language used will fly a few years ago, but not these days. It teeters the line between the heuristics of rowdy bogan language and toxic masculinity, which can turn off some potential readers.

New Art, Different Look: The Art Bazza, The Bat, and The Drop Bears #1

The art of Coronapocalypse is fantastic, with Eder Messias doing a great job of adding a type of dark mood into the entire comic book. Much like before, the design style is realistic in nature, reminiscent of the art style of X-Men in the early 90s.

In particular, it somehow reminds me of X-Men’s Fatal Attractions and Blood Ties in its art. The character designs and general mood give me a Fabian Nicieza vibe of dark, gritty, and grimy atmosphere.

The colouring done by Edwin Estrada fits the art style, adding a more dour mood. The use of darks adds a sad vibe to it, which fits Bazza’s feeling of loss.

So far, the only issue I have with the art is the general consistency of the character design. It’s easy to understand that a new artist means a different feel towards the art, especially compared to other stories. Even then, Bazza feels a little bit more brutish here.

Bazza’s head and face looks bigger than usual, and there are several panels where his height becomes inconsistent. In some pages, he’s at least a head high than the tallest character. In others, he towers everyone by at least 1.5 to two heads high.

I believe, however, that this minor inconsistency doesn’t detract too much from how awesome the comic book is.

Should You Read Bazza, The Bat, and The Drop Bears: Coronapocalypse?

Should you read Bazza, The Bat, and The Drop Bears #1? The answer is definitely yes. Whilst the general look and feel of the story is a bit different than the others, it’s still Bazza at its core. Coronapocalypse is an action-packed story that focuses on the human side of the irreproachable horde killer.