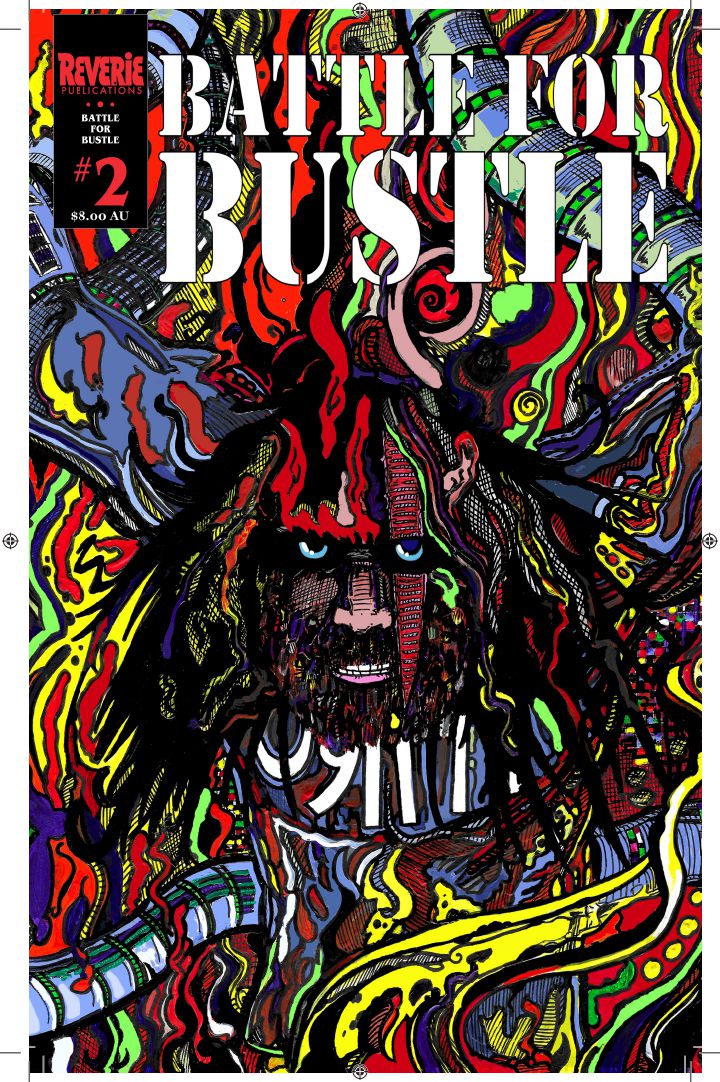 How far would you worship an unresponsive hero? How much of your people’s future can you hinge on one man? Battle For Bustle #2 explores these details in Leigh Chalker’s latest creation.

Battle For Bustle #2 is as hopeless, frantic, and mental as I remember the first one. The action has not let up, and the apathy is hard to swallow, making it a powerful tool that you’ll rarely find elsewhere.

No Hero: The Story of Battle For Bustle #2

Battle For Bustle #2 is published by Reverie Productions. Much like the first issue, the comic book is written and drawn by Leigh Chalker.

The new issue still follows Pedestrian 091177 Christopher Battle, a rebellious drone. As he is transported into the dreaded Projects, where drones are experimented upon, a ragtag group of rebels extract Battle.

As he comes to, he discovers the rebel base led by people living under the city in an organic paradise. These people revere him as a hero, and Christopher eventually learns they are led by his uncle, Saab.

As 091177 is introduced and receives the ley of the land, he single-mindedly asks for the location of his wife Noni and their child Charles. After all the cordialities, the rebels discover that the authoritarians are at their door, looking for Battle.

As the raid happens around them, Saab sends Christopher ahead, guarded by his most competent lieutenant. As they escape, the settlement tries to make a last stand, but...

The Grimdark Dystopia: The Writing of Battle For Bustle #2

Leigh Chalker is a master at telling dystopian stories, and his Battle for Bustle is the biggest evidence of such. His work reminds me of the greasy, tiring, and acrid feeling I get in situations where there is no ray of hope for the main characters.

Battle For Bustle #2 is a testament to how Chalker likes to raise up hope for his characters, only to snuff it back. Like a candle, his stories build a fire over time. The fire of hope is visible in his characters, especially those of the rebellion.

Even then, Leigh’s macabre sense of humour kills off any hope. Like the first issue, where a seeming uprising started, people’s apathy and self-preservation lost the day. This time, however, it was 091177’s attitude that killed it off.

Battle is shown to be immune to the mentally destructive effects of his torture. The problem is that the immunity works both ways, as he’s unable to show empathy to those around him.

Within the entire story, Battle was occupied by a single question: “Where’s my family?” Throughout the story, he never uttered praise to those who saved him. He neither said thanks nor offered himself to the cause. As so many people are praising him like some grand hero, those thoughts never came in. He never showed positive regard to anyone, and even his outlook around his world were in the confines of his mind.

At the time when he was most needed, Chalker magnificently wrote a selfish, apathetic bastard. This isn’t bad writing on Leigh’s part; I would argue this is a more challenging way to create a complex character.

Christopher is a cautionary tale about the usual dystopian hero that, much like 1984’s Winston Smith, does not have a traditional hero’s quality. His own agenda engulfs him too much to save anybody else.

Ugly and Distorted: The Art of Battle For Bustle #2

Battle for Bustle #2’s art is equally as dystopian as its writing. Again, Chalker has some of the most macabre drawing techniques. The pencilling works as intended.

The art of BFB2 is reminiscent of paintings in modern art museums that depiction macabre topics. The design is full of mutilation, physical destruction, and cyberpunk aesthetics.

It’s easy to see the techno-organic cyberpunk aesthetic he uses. The rebel faction is full of fully organic humans - ugly, scarred, and tortured. On the flip side, the authoritarians are all ravaged by technology - damaged but in a different way.

Chalker has a great understanding of how to draw ugly and distressed. The style is beautiful for its purpose.

Should You Read Battle for Bustle #2

Should you read Battle for Bustle #2? For connoisseurs of Australian comics, Leigh Chalker’s story is hopeless and a little disturbing, making it a must-read for people who enjoy their dystopian tales. The city of Bustle is dying, and it’s slowly cannibalising itself. Within it, the most selfish of heroes is no hero at all. Christopher Battle is there for himself and his family. His mind is a fortress, and nothing comes in… or out.