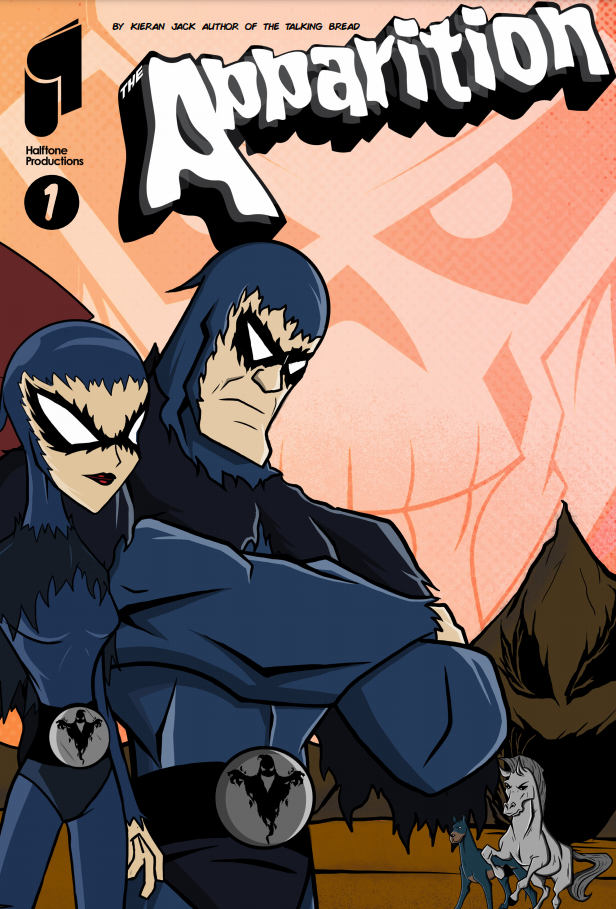 The Apparition # reviewed by Jerome August 7, 2021

The heroes of yore are fondly remembered for their swashbuckling adventures, with many a comic fan growing up to love them. From The Phantom to The Tick to Superman, heroes are the shining beacon of hope and light… until they overstay their welcome.

Kieran Jack’s The Apparition is a comedic satire of things we’ve come to love. It shares the same whimsy and humorous chops as many that came before it. Much like the stories it tries to parody, it also creates a cast of sarcastic characters that can knock you off your socks.

The Story and Writing of The Apparition: Subverting Expectations

The Apparition is an Australian indie comic book published by Halftone Productions. The story is written and illustrated by Kieran Jack, with Clare Jack as its co-writer and Graeme Jackson as letterer and greytone colourist.

The Apparition follows the story of the heir to the Stalker Industries. As pirates plunder every last bit of riches from their freighters, the young man finds himself castaway on a mysterious island full of not only natives but potential adventuring colonialists.

The entire comic book has a level of self-awareness that is comparable to American stories like The Tick, Deadpool, and even Megaton Man. I went into reading the story believing that it will be another silly parody, and I’m right up to a point.

The Apparition is silly. It has the same lifelike dense humour that Kieran Jack is known for. Stories like The Talking Bread come to mind when you read The Apparition.

You’d think that’s enough as it is to get the story on its way, but it’s not. It is silly, but it doesn’t overstay its welcome. It plays on several twists and turns that jumps around silly and serious.

When silly, the story plays like any other funny Australian indie comic. It tickles the same bones and kicks the same shins. It’s when the story does an about face is where it’s at.

When it transforms and moves away from what silliness it tries to portray, it shows the quality of storytelling that Kieran can do. It doesn’t take away from the stories at all but rather creates a bigger swell of appreciation inside.

If I may be excused for using a manga term, the Apparition uses a technique that feels similar to “gap moe”. Gap moe is the appeal of a character that comes from their difference in character.

In broad strokes, The Apparition as a story is a fine example of gap moe. It’s easy to find more enjoyment in the silly parts of the story once you enjoy the serious parts of it.

I might as well say it here, however. In the spirit of honesty, I pray to the gods that Gail Simone doesn’t see some parts of the story. There is some type of Ron Marz’ Kyle Rayner fridging situation that not everyone will appreciate.

The Art of The Apparition: The Evolution of Kieran Jack

The art of The Apparition speaks a lot to me as someone who has read a ton of comic strips in my time. It also helps that I have previous experience reading Kieran’s works, so can say how much Kieran’s work evolved over the years.

In his original works, there was very little subtlety in his art. His linework used a consistent thick outline and a ton of shadows to cover up potential imperfections. That is nowhere to be found in this story.

I didn’t hate this style at all. Even then, it limited what kinds of situations Kieran can illustrate. Everything always had a dark undertone to it, even in bits where humour is abound.

The Apparition is clean and easy to read. The pencil mileage may not be too high but it tells a proper story with every panel. The inking and use of greytones is also commendable, with no rush in contextualising character movement.

The lettering is also quite dynamic, with only a few pages where the narration could use a little extra line space. If I have to point some gripes, it comes from the panelling.

The panel pacing can be awkward in the first parts due to adherence to what seems to be a panel formula. He churns out nine panels to quicken the pace and uses landscape panels to offer a broad look.

It works in many situations, but in some, it feels unnecessarily same-y. The first part is also the weakest across all stories, with its weird experimental landscape style. It tried to parody how a comic strip works, but it confused my reading direction for a bit.

Should You Read and Support The Apparition?

Should you read and support The Apparition? The obvious answer is yes, you should. The Apparition slakes the thirst for a satire you won’t think you’d need. The story is robust and enjoyable and has ways to go from here.

It subverts expectations for stories like this, which in of itself becomes a double subversion. It’s not what you think it is, and The Apparition is a book for the curious.