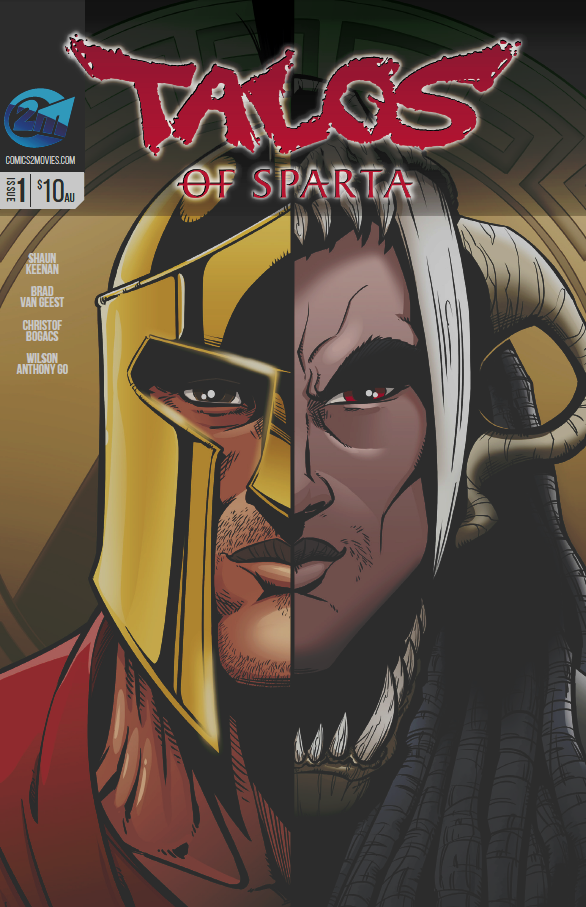 Greek history is one of the richest sources of narratives ever. Even then, there is a limit to how far it can help create a good story. Depending on how it’s used, it can be a hit or a miss.

Talos #1 is a great story by itself, but it makes me wish that it is set in an entirely different setting. Though the art is great and the art design is high-quality, it falls a little on how it works out its narrative. The plot is a little too thin and has some inconsistencies that can raise an eyebrow.

The Writing and Story of Talos: Needs More Names

Talos #1 is an indie Australian action-fantasy comic book published by Comics2movies. The story is created by Shaun Keenan & Brad Van Geest and written by Christof Bogacs. Brad Van Geest was in charge of art, with Wilson Go handling colours and letters from Stephen Kok.

The story of Talos follows two distinct plots: a training montage at the Spartan Barracks and a military campaign outside of it. It juxtaposes two different stories that will eventually tie up with each other.

At the first story, Talos tries to encourage his people for the fights ahead. He also trains with Odysseus, likely a man who is supposed to be an anachronistic representation of the quick-witted king of Ithaca within the story.

The other story follows a band of Spartans who travel north to look for their Northern allies. These Spartans meet waves upon waves of warriors, fighting their way through a band of berserkers.

The writing and story of Talos is quite good but with caveats. It is a solid action-fantasy story that offers a parallel storytelling style. The story takes time to digest, as there’s very little indication on who we are following and why are we following them.

Names are barely mentioned more than once, so there’s no real connection with the characters. The plot progression of Talos is expertly crafted, with a good cold open similar to that of movie trailers. Even then, I would have loved to see more characterisation from the side characters.

As a history buff of Mediterranean and South American cultures, I appreciate the story direction. Odysseus, even if I know he’s not the king of Ithaca, is a character close to my heart (Trojan War dates to around 12th century BC, whilst the story likely happened around 2nd to 3rd century BC).

The writing follows the rule of cool and should be treated like how it should be: an action-fantasy. The fight between a familiar northern culture that was unlikely to have been in the Mediterranean took me aback, but the juxtaposition of impending doom is great. It’s hard to argue how smooth they introduce characters.

The story could work a little to make readers invested in characters. Killing random fodder does nothing and important characters should at least get a name. Apart from that, the pace is clean and smooth.

The Art of Talos #1: Professional Nostalgia

For all the things that Talos #1 missed on the story side, it’s hard to deny how good its art is. Brad Van Geest is great with his pencils and inking, with clean lines, solid outlines, and confident-looking backgrounds.

From the style, it reminds me of the line style of Joe Madureira in 90's X-Men comic books, with his differing grades of thickness on the outlines. These offer several tones of shading and add more depth into the character design.

His characters look awesome. The proportions are right for the story and every muscle is fantastically strewn. What makes this better, however, is the background art.

The background art shows a good atmosphere for the characters. The designs are also period accurate, including the uniforms and symbology. One symbology that took my eyes is the quaternary celtic knot, which symbolises several Irish cosmologic materials, including the four elements.

Should You Read Talos #1?

Should you read Talos #1? It’s a great opener for what seems to be a solid, up and coming tale of fantasy Sparta. If they can remember to mention the names of their characters and humanise them even further, the comic book will be more than worth it.

I’m looking forward to giving Talos #2 a read in the future. It can only get better from here.