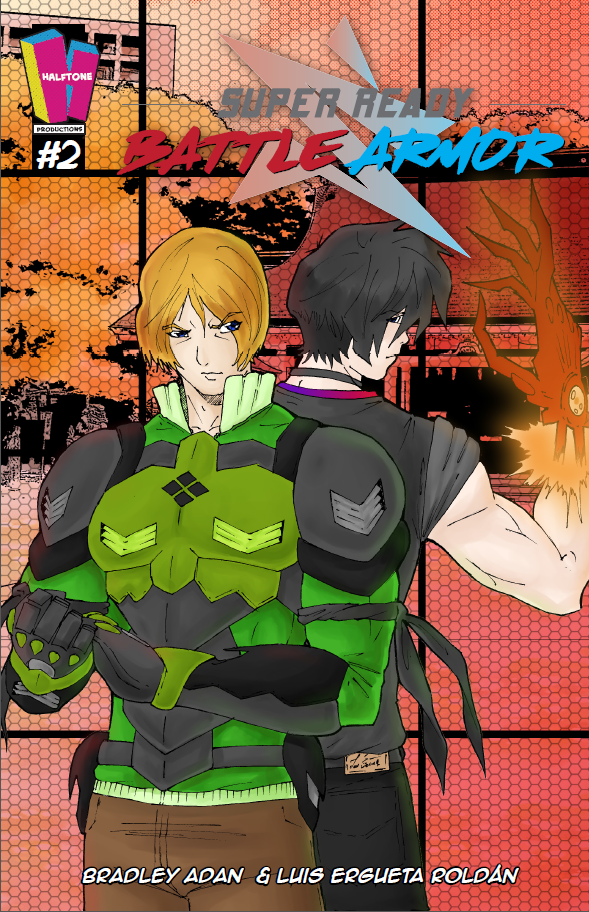 When it comes to the modern protagonist, it’s common for them to be itching to use their super powers. It’s not always smart to do so, but the call to adventure is too hard to resist. It seems the protagonist of Super Ready Battle Armor #2 is the same.

SRBA #2 is a bit of an improvement to the first issue, making it an ok chapter. Whilst the plot pacing is still ultra confusing, it’s a little better than before. It lacks exposition where it matters and has too much where it doesn’t. It’s still an art-first story, and it can get better if it tries.

The Story and Writing of SRBA #2: A Little Less Addled

Super Ready Battle Armour #2 is a comic book published by Halftone Productions. The story is written and lettered by Bradley Adan, with illustrations from Luis Ergueta Roldan.

SRBA 2 follows B.A. and a new character, Infector, who meet in the direst of circumstances. B.A. is in the middle of a firefight, about to lose his life whilst Infector, a superpowered metahuman, is trying to live a normal life. As their life intertwines, one of them discover that there is more to them than status quo.

So far, the story of Super Ready Battle Armour is a marginal improvement on SRBA #1. The story is still easy to digest but hard to follow, with much of the narration working against its chatter-dense plot.

Infector, as a character, is your average shounen manga protagonist. For those who have no background in manga, the Japanese shounen genre is a standard story aimed at pre-teens to teens. The stories in this genre includes the likes of Dragon Ball Z, My Hero Academia, and One Piece.

These stories, in general, follow a protagonist on a hero’s journey. Most of them are generally likable and naive, usually with a type of superpower that they use for good. They also try their best to thrive and make friends along the way.

From what it seems, Infector is your average anime protagonist. He cares about people, wants to be of use, and consults people he values. He’s also clear in his intent to be a hero to the people around him.

Infector is quite a straightforward character. His naivete and lack of complicated feelings makes him a compelling deuteragonist. B.A., on the other hand, has not done even a splash so far.

B.A. as a character has no say so far on how everything progresses. If the first three issues are a way to introduce him into his powers, it’s taking too long. Hero origins usually last one issue, and taking longer than two makes the narrative feel contrived.

The scripts has a serious issue with how its characters talk. They’re super chatty but none of it builds into anything. I’ve seen a lot of stories where monologues and a lot of chatter happen and it works to build the story. The script feels empty bluster, which goes in the way of the reading experience.

If the comic can cut down on the chatter and make lines matter to the story, it will work. The overcharacterisation is problematic, but the story is starting to get interesting.

When it comes to art, there’s only very little to criticise about Super Ready Battle Armour #2. So far, the comic book works similar to a manga-comic hybrid, using styles from both sides to good use.

From what it seems to me, Roldan’s style is very much manga. The used of super-deformed/chibi comedy and the pacing is similar to the Japanese art form. In all honesty, the style looks exactly like the one found on “How to Draw Manga” books.

The facial expressions are a little samey, especially the angry faces. Even then, I’m enjoying how a lot of the panels are drawn, even if the pacing is a little off. If anything, I’m enjoying many of the foreground designs.

The halftones also don’t help with the quality of the style. It helps to hide potential imperfections, but it also prevents focusing on the fantastic foreground art.

Is Super Ready Battle Armour #2 any good? Yes! For all its faults in scripts, it is still worth the read. If it can improve its pacing and make some of its exposition matter, it can grow into a solid read. The art would work better with less halftones and crisper art.

I hope Super Ready Battle Armour #3 ends the origin story already. Once the origin ends, it’s only then that the true story starts.