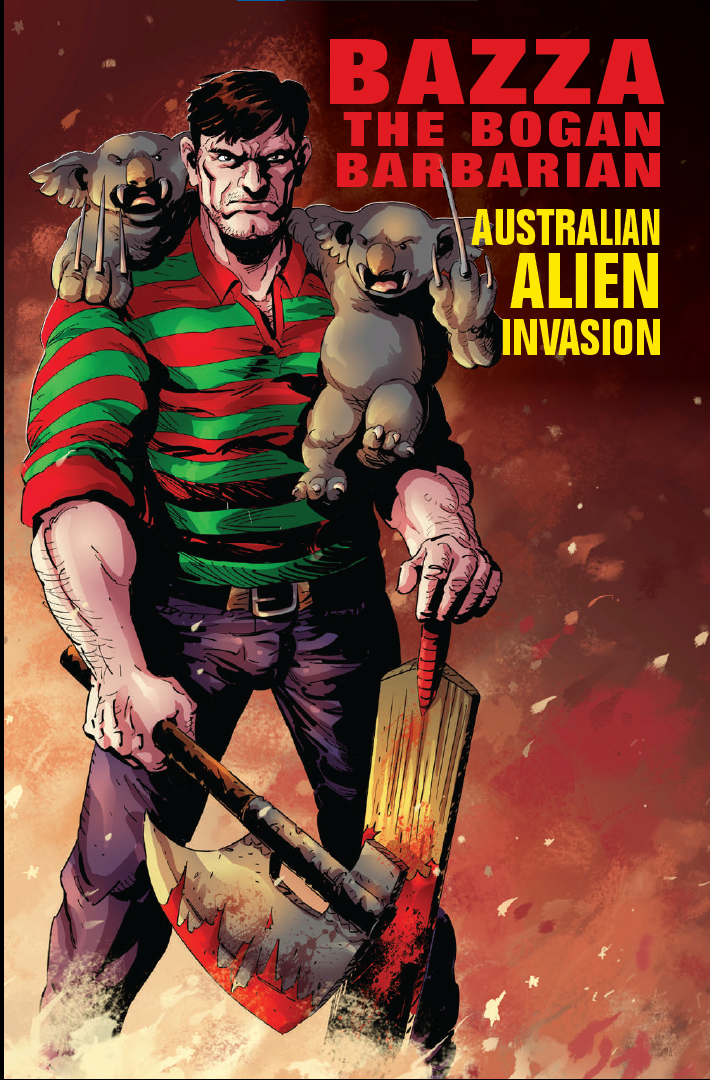 There are only a few comics that I can classify as bodaciously Australian comic books. These are stories where they are 100% Australian when you squeeze every once. Bazza The Bogan Barbarian’s Australian Alien Invasion is your quintessential Australian story.

Much like its predecessors like The Jackaroo, Australian Alien Invasion has so much Australia flowing through it. It’s 100% pure eucalyptus extract, and it’s the type of action that you’d want no other way.

Koalas, Dingos, and A Whole Lot of Blood: The Story of Bazza The Bogan Barbarian

Australian Alien Invasion is a graphic novel entry into the series, Bazza The Bogan Barbarian by Silver Fox Comics. The story is written by Sorab Del Rio, with pencils and inks from Emerson Dimaya. Simon Wright is in charge of design and colours, whilst Don & Jessica Ticchio handled the lettering.

Australian Alien Invasion follows Bazza The Bogan Barbarian, a fiery Australian macho guy who earns a living as a prizefighter. As he is busy fighting prizefighting for a Mac Truck, the story goes back to his roots.

Bleeding Red and Green: The Writing of Australian Alien Invasion

Bazza The Bogan Barbarian’s Australian Alien Invasion is an action comic fan’s wet dream. It’s so Australian that you can read and squeeze vegemite out of its pages, then feed it to koalas, and they’ll accept it as eucalyptus leaves.

Joking aside, Bazza is a well-written action graphic novel that takes care to properly build the details it needs to become a strong story. The plot is high-octane, but move quite slowly for a reason.

The action sequences have a slower pace because Sorab takes their time to explain things through. For someone who’s a stickler for well-fleshed out stories, Sorab’s work is much-appreciated. There are still a ton of interactions between the characters, too, without making everything contrived.

What makes the story stand out, however, is the uniquely Australian humour. It’s easy enough to digest that you get every joke. Every punchline works, too, without making it ridiculous. The only problem I might have is the comics will barely appeal to anyone who isn’t Australian.

The pace and writing somehow reminds me of Darkhorse Comics’ Army of Darkness. It’s rowdy, chaotic, but it’s tons of fun.

Bazza The Bogan Barbarian, as a series, is a blank cheque for artists. Emerson’s art style takes quite a bit from Gary Chaloner’s Jackaroo and ‘80s to ‘90s comic book art like those of John Bolton and Paul Smith’s X-Men.

The style is realistic but also fluid. The details are awesome, with the pencils showing Emerson’s technique. He knows when to add details to the background and when you push the focus to the characters on the foreground.

The inking is also clean, and you know for a fact that it’s a finished product. The character designs are superb too! You can see every emotion throughout the spectrum; every scowl, every laugh, and every worry is there for you to feed in.

It’s also interesting to note how the Australian Alien Invasion barely uses any straight frames on its pages. In many cases, it uses diagonal panels to signify moment to moment action whilst adding small details here and there.

As for the colouring, Simon Wright did his job marvellously. All the colours are right for the situation, and they all work. From Bazza’s boxing kangaroo colours to the colours used for the wheat fields, everything is realistic and immersive.

Should You Read Bazza The Bogan Barbarian’s Australian Alien Invasion?

Should you read Bazza the Bogan Barbarian’s Australian Alien Invasion? No doubt about it, you should give this 80-page graphic novel a read from cover to cover. Almost anyone would enjoy it for sure and it’s worth whatever sticker price it has.

I would go as far as to say that, if you’re an adult Australian, this is a must have in any collection.

If this is the level quality that every Bazza has, I’m also expecting the other Bazza story, Coronapocalypse, to be a great read. It should even be better, considering the team will have their process worked out.