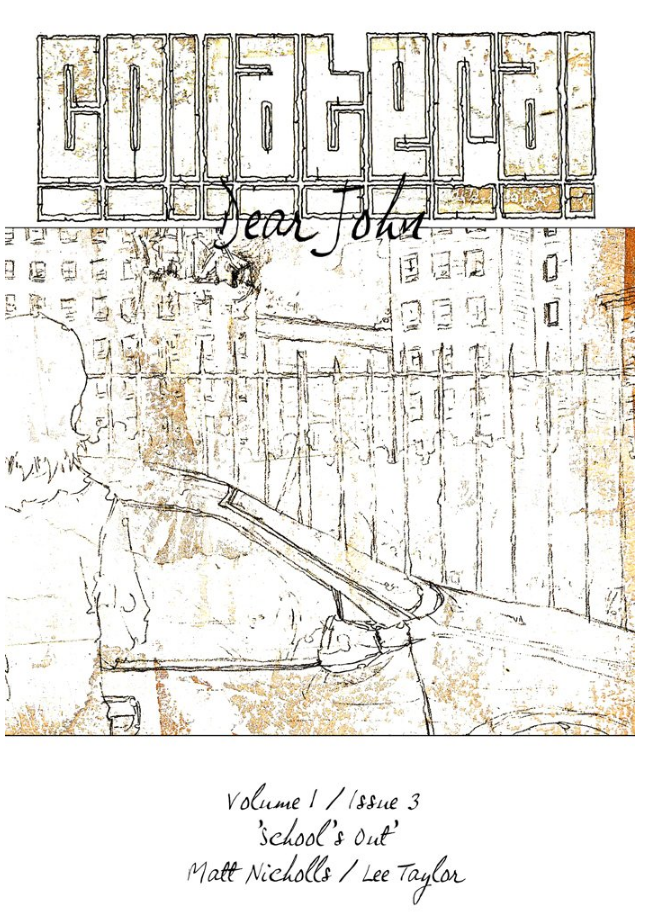 If you find out that much of the city you live in can kill you, your friends, or your family out of nowhere, what will you feel? Collateral - Dear John #3 is a realistic reaction to how people work their lives out with these situations.

In School’s Out, the Vacant City is dying little by little, and the family can see it happen right before their eyes. As their city gets smaller, the world is getting bigger - and more people start coming into their lives.

The World Is A Nasty Place: The Story of School’s Out

School’s Out is the third chapter of Collateral - Dear John #3. Much like the first two chapters, this issue is written by Matthew Nicholls and drawn by Lee Taylor. The issue released July 6, 2013.

Collateral #3 opens with the rebellious James meeting his friends, only to find himself in the middle of trouble. James fetches a friend, Pills, all bloodied up and on the getaway. As they move away, they stay silent, never addressing the problem.

Later, Mary and the kids discover that school, where Scott and Timmy go, became a battleground for a superfight. Scott’s building was in ruins, with all the parents gossiping amongst themselves.

The parents were discussing what happened to Gwen after her son, Stuart, was taken in by the spooks. They also inform that school will be out for a couple of days for Scott whilst Timmy moved to school. Gwen’s family is devastated. With Stuart gone, her husband left and she is in a dire mental state.

Differing Outlooks: The Writing of Collateral #3

The direction that Matt Nicholls is visiting with School’s Out is interesting, to say the least.  With the first chapter, they explored being a family in a city ruined by supers. With the second, Matt explored how internal problems can be bigger than the problems of the world. With this third outing, he tries to connect the family to the city and take them out of themselves.

Every member of the Reid family thrives differently in city that’s oppressive to the normal people who live there. They start seeing things beyond themselves and how it affects them as normal people.

Nicholls’ masterstroke is using every family member as a different path towards various directions in one storyline. These directions offer multiple perspectives to the same dilemma, which lets us dig through the story deeper.

Through Mary, we see how ugly people treat others’ demise. Timmy’s naivete and innocence beckons how we as comic book fans see stories like Marvel and DC, forgetting the real victims from every event.

James sees first-hand the brutality of the real world through his bloodied friend. Scott enjoys the destruction, only because he benefits from it. John, on the other hand, doesn’t care because he doesn’t have a job.

These perspective underscore what every reader’s potential reaction. Nicholls tries to predict how we’ll behave in real life, and he catches these situations with pinpoint accuracy.

Impressionism By Accident? The Art of Collateral – Dear John #3

If there’s something about Lee Taylor’s art, it’s consistency. With most comics that have similar production values, they usually devolve into lower quality images. Many get tired of drawing the same thing again and again. There’s none of that with Collateral #3.

If anything, Taylor’s art improved quite nicely, giving a nice impressionist feel to every panel. Whilst the lines are still weak and faded, these provide more detail than ever. Every panel feels alive, even with little to no inking at all.

One of my smaller gripes that I didn’t mention on the past reviews is how Taylor nonchalantly drew noses with little to no detail. I saw it improve in the second issue and has now come full circle with issue #3.

I’m still looking forward to him trying to show more for less. With Matt’s good storytelling, Lee’s art is nicely catching up. With more funding or a dedicated inker, everything would have looked bombastic.

Even without an inker, the pencilling still looks lifelike. Mary’s character design has improved the most. John is also detailed, but his character design feels rougher this time around - not because Lee was letting up, but because of his fading relationship with his family.

Should You Read Collateral – Dear John #3?

For anyone who has gone this far, there are two more chapters to Collateral - Dear John. Collateral #3 is a great read, acting like a great bridge between Victims of Circumstances and the next chapter.

If you’re looking for a good interplay on perspectives, this is a must-read. It embodies the indie spirit of Australian comic books through and through.