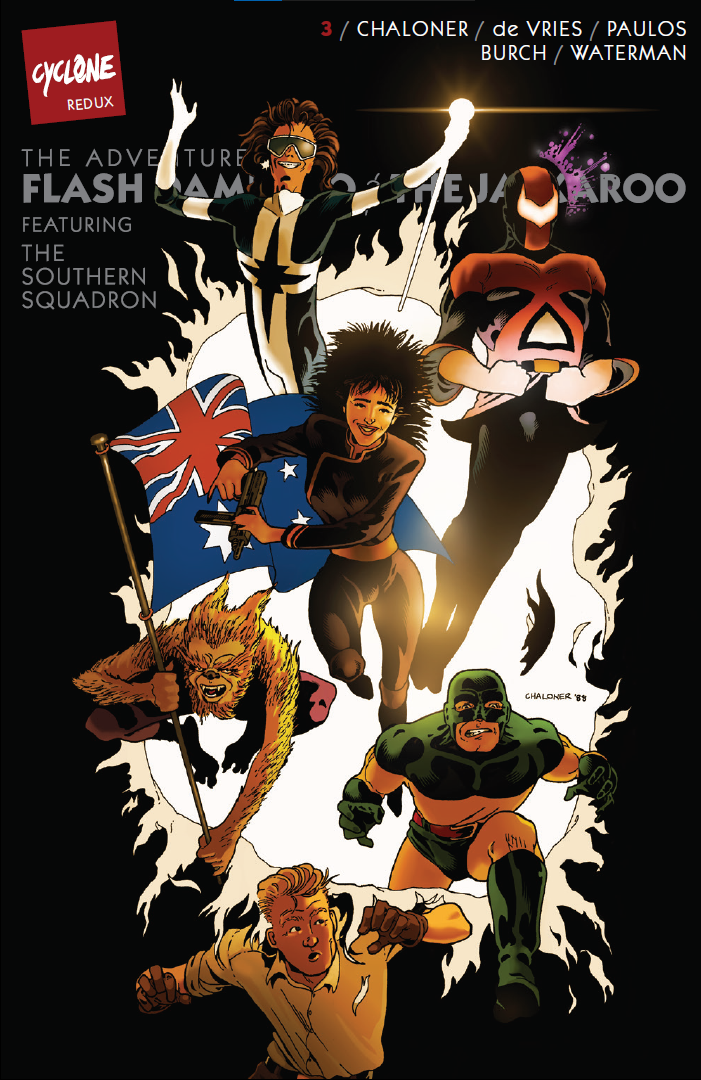 The first two issues of Cyclone Redux: The Adventures of Flash Damingo & The Jackaroo, published in 2017, reprinted a more or less continuous saga from 1985 and 1986, featuring the two title characters (but rarely together). This saga is neatly wrapped up by the end of the second issue.

In the third issue, rather than a single narrative, we find a collection of loosely connected stories – three from 1987 and the last from 1990. It becomes clear that the Redux series is not, in fact, a collection of the joint adventures of the title characters but an anthology of their appearances – separately and together. As a matter of fact, The Jackaroo is completely absent from the current issue. The anthology approach has some interesting side-effects, as we will see.

Another notable change in issue #3 is the variety of creative personnel involved. Series creator Gary Chaloner – having written and pencilled all of the stories reprinted in the first two issues – steps back and allows other creators to play with his characters.

Why is this important?

Because each of those issues also contained stories by other creators featuring their own casts of characters. As these creators worked together, their characters began to cross-pollinate, leading to the beginnings of a shared universe. Thus arises the situation in Redux #3, in which Flash Damingo appears in four separate but related stories. In the first two, Flash appears with other inhabitants of the Cyclone ‘universe’, while the final two are solo stories by creators other than Chaloner.

The first story, Violent Night, written and drawn by Chaloner, introduces us to The Southern Cross, a member of super-group The Southern Squadron. It is here that we see the main limitation of a cherry-picked reprinting of the old Cyclone! Stories.

The Southern Cross is clearly a familiar character in this universe – yet we are seeing him for the first time with very little in the way of introduction. However, we do get a taste of his powers as the story continues. This story takes the form of an interlude – a road tale in fact, as we learn that Flash and Southern Cross are on their way to Sydney for some reason.

They encounter and subdue a suspicious looking gang with a degree of violence that seems unwarranted – until a revelation at story’s end. In the course of the action, we learn of Southern Cross’s love of style and the ruthlessness of Flash.

We are also treated to a crossover of a different sort with the appearance of ‘Fad’, the trivia resource seemingly on call with a wealth of historic comic book references – an apparent nod to Chaloner’s fellow creator Tad Pietrzykowski. There is also the hint of a nod to the then popular Hey Hey It’s Saturday TV show. After the mopping up, our two heroes continue on the journey to Sydney.

The second story, Moving Home, written by David De Vries and drawn by Chaloner, is a tale of the Southern Squadron. Here, readers of the Redux series will meet several more members of the Squadron for the first time. Despite being the longest story in the issue, it appears because of a brief appearance by Flash Damingo – who has now made it to Sydney with the Southern Cross.

We find Flash relaxing at Bondi Beach with The Southern Cross and fellow Squadron member The Dingo. Flash appears in the story just long enough to insult the The Southern Cross’s girlfriend and to be flown to the Australian outback and abandoned in punishment.

The main part of the story deals with the Southern Squadron gaining a new headquarters and a new status as an independent government department with a ‘Triple A-One’ security clearance. This is followed by their first official mission: dealing with the sudden and unexpected arrival near Alice Springs of a team of heroes from the United States – The A-Men.

Pun? Tribute? It is not really made clear and may well be both.

Fleeing media persecution in their own country, the A-Men have come seeking refuge in Australia. Their request is met with no sympathy and their application rejected. Not surprisingly, battle follows. We are treated to a multi-page fight in which the abilities and quirks of both teams are on display.

The A-Men are defeated and – in a move that curiously echoes modern times – decide to try their luck with New Zealand. The Aussie heroes warn New Zealand team The Waitangi Rangers (a first appearance – albeit by telephone?) and their first case is done.

The third story in this issue is a rarity in modern comics – a text piece. Hitcher, written by Launz Burch, with illustrations by Des Waterman, is a solo tale. Flash Damingo, having been dumped in the NSW outback with insufficient money to return, attempts to hitch-hike back.

Unsuccessful, dusty and sweltering in the heat, he decides to do what the locals would do in his predicament – he heads for the pub. Inevitably, after managing to ‘convince’ the barman that an alien platypus can be served a beer, he meets a very attractive local young lady, gets in a fight with a few of the locals over said lady and prevails – with a little help from the lady and a fire extinguisher. He then agrees to accompany her north in her Kombi – presumably abandoning his plan to return to Sydney. “Whatta da hell, you only live once!”

The final story is Homesick, written by Chaloner with art by Jason Paulos. In the only story not from the Cyclone!/Southern Squadron run (it appeared first in Hairbutt the Hippo #2 from Rat Race Comix), we find Flash travelling to Brisbane with Darlene, his new friend from the previous story.

He is, as the title suggests, missing his own world. The relationship with Darlene also seems to be wearing a bit thin but – despite their bickering and his determination to be self-sufficient and tough – he gets some advice from Darlene to help him ease the hurt. We see him acting on that advice at the end of the story. This piece is quirkily drawn and largely character-driven with the only action being a brief memory sequence.

Overall, the third issue of Cyclone Redux: The Adventures of Flash Damingo & The Jackaroo serves as a sampler, or showcase of the talent and characters under the Cyclone banner in the mid-1980s. Because of the fact that Flash Damingo and The Jackaroo shared their lives with the other characters and creators of the time, this attempt to chronicle their complete adventures has the fringe benefit of giving us an incomplete history of this part of the Australian comics scene.

In this issue, we learn details of characters whose stories have already begun elsewhere. We are also given a taste of the writing and artistic styles of several creators of that era. The artistic styles in particular vary greatly, yet all tell their particular stories well. As Chaloner himself says in the foreword, there is a growing confidence and quality in his own art – and this can be seen in the writing and drawing across all contributors. It must be noted that some dialogue and attitudes raise eyebrows now – but they are very much products of their time and must be viewed as such. The overall impression is of steadily improving characters and creators. With six issues remaining in this series, further improvement must lie ahead.