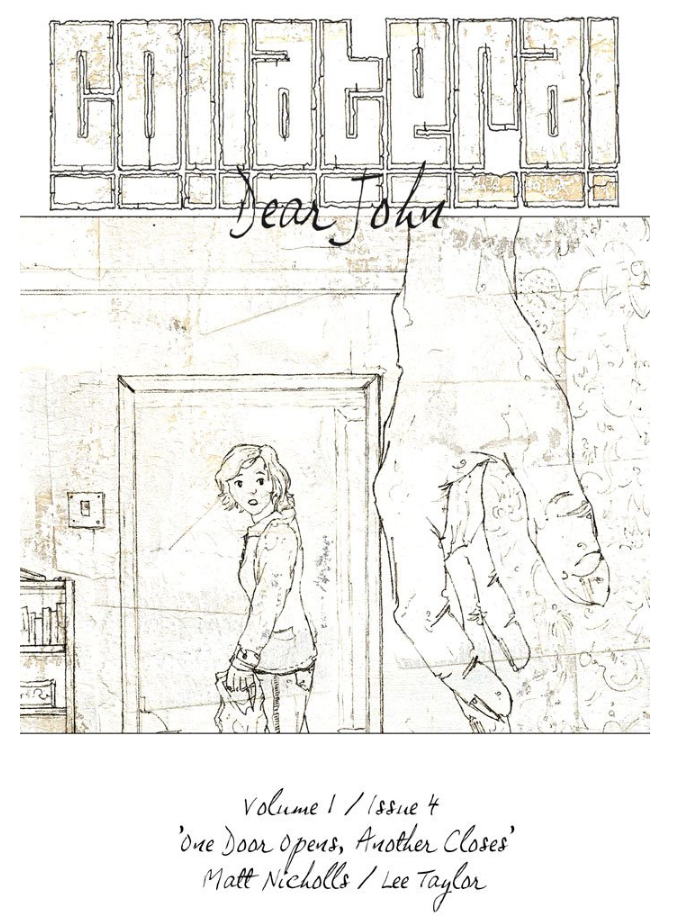 When does hero worship become too much? When do civilians get the right to rise up and stop being collateral damage? These are the questions that Matt and Lee ask with Collateral - Dear John #4.

Titled “One Door Opens, Another Closes”, we look deeper into the disenfranchisement of John, Mary, and their family. The setup is quite amazing, showing the devolution of the family into individuals tired of their reality.

Mob Mentality: The Story of Collateral #4

Collateral - Dear John #4, “One Door Opens, Another Closes”, is a self-published Australian comic book. Like the other parts of the series, this comic is written by Matthew Nicholls and drawn by Lee Taylor.

The story of Collateral #4 still follows the Reid Family and their slow emotional drift from each other. John is unwilling to be a husband and a father until he finds himself a job. James does not want to interact with his family at all.

Mary asks John to relax with the children, only for him to decide to bring Scott and Timmy along to the mall. There, he decides to look around for a job whilst the kids play around.

As John moves around, a fight ensues between the supers, with one of them crashing nearby and killing a mother. Whilst others are happy that the hero has saved the day, the irate father sees it for as it is: collateral damage.

One Door Opens, Another Closes is a story of disenfranchisement. It is a story of hopelessness, loss, and how people react to different types of loss. With this chapter, we see a more delicate portrayal of how people handle grief.

With John, he answers his helplessness through withdrawal. As he forgets to be a human to the ones that matter, he tries to channel his anger towards productive things like finding a job.

The pinnacle of his frustration, however, comes from the callous disregard by the superheroes that people worship. As he further sees his fellow civilians disregard a death, he grows more tired of this treatment.

With Mary, she deals with a friend’s loss with altruism. Even then, she receives no positive feedback from her concern. She sees the slow, agonising demise of Gwen and how, in a different situation, this may be her family.

James deals the sight of his friend, a blood-soaked Pills, with the only way he knows: turning away from his family.

Matt’s treatment of several versions of grief is sensitive and realistic. He knows that grief does not dissolve with a friend’s first visit. He knows that frustrations usually go unacknowledged.

Even the existence of the “anti-super” group is a good look into mob mentality. Whilst John is right to be concerned of being a collateral, being approached by an organisation at your weakest is how cults form.

In a world where people build their own factions to create echo chambers, Matt solves John’s feelings of disenfranchisement. At what cost? We’ll eventually know.

Too Vague: The Art of “One Door Opens, Another Closes”

I wondered if I was being hard with Collateral’s art when I first read it. I must admit that it didn’t initially resonate with me, but there’s something to it that grows on you.

The art of Collateral #4 is admittedly not as good as #3, but that’s not bad at all. It still feels like a washed out impressionist dream state, especially with the melancholic direction of the story.

Taylor is still a master of visual angles and perspectives, which makes up for the lack of good outlining. The art for the destruction John saw was quite dramatic, even with just some debris and a smudge of charcoal.

The treatment of Gwen’s pseudo-death was also dramatic, but the art fit just right. My only problem is with the introduction of the new character.

Without spoiling, the person’s design is too similar to John. I can’t figure out which is John and which one is the new character for two full pages. Other than that, everything is as good as it gets.

Should you read Collateral - Dear John #4?

Should you read Collateral - Dear John #4? “One Door Opens, Another Closes” is a good direction for the series. As it’s the penultimate chapter, it’s expectedly more dramatic than any of the first three chapters.

If you’ve invested on the first three chapters, #4 is a solid offering from Nicholls and Taylor. With the last chapter on the way, I’m expecting something good to seal the deal for the series. I’m excited to give it a read and see how all of this ends.