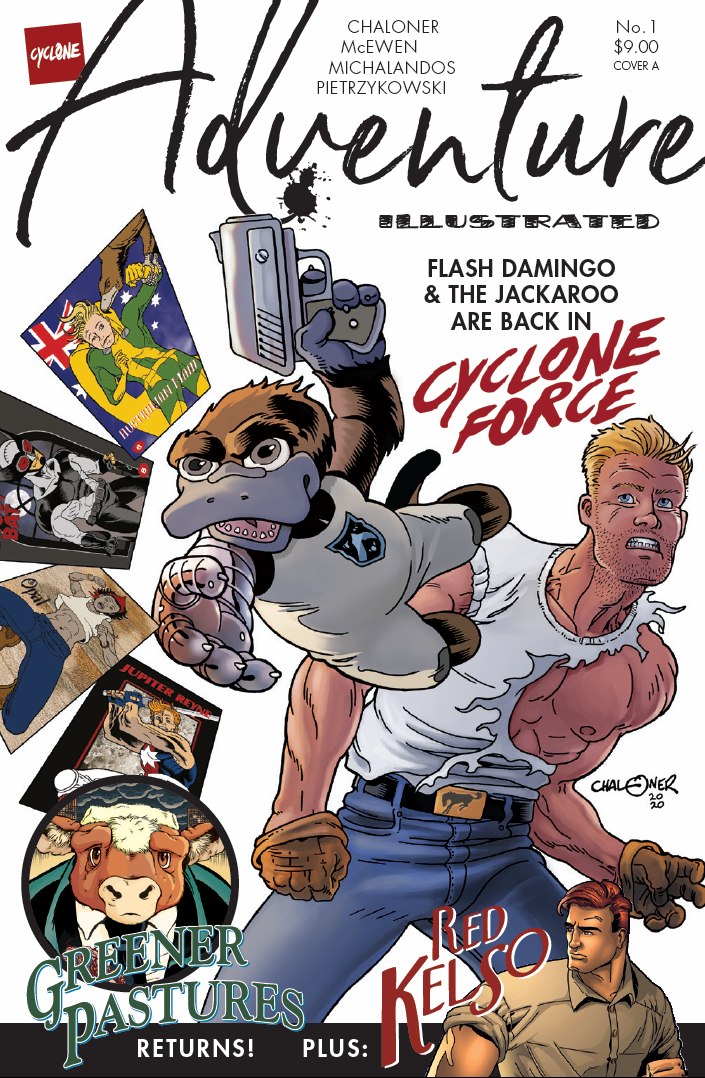 From Cyclone Force, Greener Pastures, to Red Kelso, you’ll find three different types of adventures for you. Every story offers something different to the table too.

Adventure Illustrated is an anthology comic book with three stories in one issue. These stories include Cyclone Force, Greener Pastures, and Red Kelso. It originally started in 1985 as a limited run comic book and is one of the rarest Australian comic books out there.

Cyclone Force is a story written by Gary Chaloner with Tad Pietrzykowski, with art from Chaloner and colours from Graeme Jackson. Tim McEwen also provided the inks for page 1 and 8.

Greener Pastures is created by Tim McEwen and Michael Michalandos, whilst Red Kelso was drawn and written by Gary Chaloner.

The story of Cyclone Force follows a crossover of Cyclone Comics heroes, from Flash Damingo, Jackaroo, Opal, Australian Maid, and the Ghost Bat. There are also some classic Pietrzykowski characters like the original Southern Cross and The Dark Nebula.

The story starts in media res, where Flash Damingo is missing, and one of the heroes are narrating things that happened in the past. In the footage, the heroes are fighting a giant kaiju alien, and when everything comes to whack, Flash does something unthinkable to save the day.

Greener Pastures a long-haired, bearded man underwater as he goes to the surface. As he goes on with his journey, he slowly changes how he looks, only for nobody to notice him.

As the old man reaches a TV station, he blabbers on and complains, warning of an impending doom, only to casually walk out.

Finally, Red Kelso is a prologue that follows a team of early 20th century explorers into the depths of a jungle. Within it, they find a temple, where traces of death are seen all over the place.

As they fight back, they are in the midst of a losing battle against the native population of the land where they’re in.

Adventure Illustrated is quite the interesting comic book, mostly for how it treats the anthology that it has inside. If you’re Australian, you likely grew with this characters in your shelves. Gary Chaloner and Tad Pietrzykowski are legends for these characters they created.

Chaloner’s The Jackaroo is Australian Captain America and represents much of the average Australian comic fan’s childhood. The story is quintessential Chaloner in this story - lots of action and simultaneous events happening at the same time.

Chaloner has a knack for big events happening, even when it’s almost mundane in nature. Even then, he has a way of framing simultaneous events that make the fights coherent and packed.

Compared to the first years of Flash Damingo and The Jackaroo, the storytelling has improved so much now. The events, even simultaneously, now are easier to follow. Whilst Gary has always been a solid storyteller, his process has now aged like fine wine.

Greener Pastures and Red Kelso, on the other hand, are solid teasers. They don’t tell much by way of the story - and they shouldn’t since they’re prologues. Even then, they still offer quite the mystery. They’re good enough to pique curiosity for the upcoming stories.

Personally, Greener Pastures intrigues me, mostly because it was one epic rant. Red Kelso is has a story in the running, so I’m excited to know what happens next.

The new Adventure Illustrated is a new and improved version of many Cyclone Comics offerings of yesteryears. The new offering also means improved graphics and art design.

It’s endearing to see the art of Gary and Tim improve over the years. Before, much of their work includes soft, hand-drawn lines with some roughness around the edges.

Gary always offered great use of shading in his past work. His use of blacks and utilisation of ambient occlusion are one of his forte. Chaloner’s art style now looks so good with an all-digital medium.

Tim McEwen’s style in Greener Pastures is what I call beautiful ugly. It’s supposed to look mangled and out of this world, but it’s also great art. It works just for its purpose.

Should You Read Adventure Illustrated #1?

Is Adventure Illustrated a must-read? For those who have been fans of Gary and Tad, this is a superb return to form. It’s not only a nostalgic throwback to the good times, but also a good restart for the future of some of the best Australian comic book heroes of all time.

If this is any indication of the future, we’re looking at good things waiting for us.