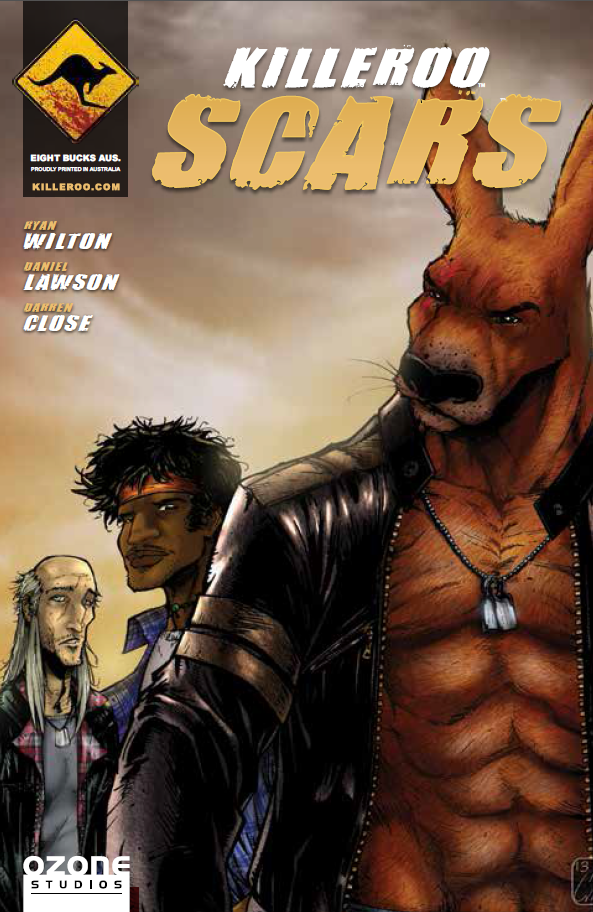 Killeroo Scars marks the explosive debut of our principal marsupial protagonist Rufus onto the Australian comic book scene. This one-shot origin issue conceived by the brilliant mind of Darren Close is equal parts fast-paced thriller and HoROOfic origin story, embracing historic and cultural lore that is as brutal and unforgiving as the harsh climate upon which it’s set.

Unlike other Killeroo titles that depict the play by play of a war against the biker gangs whilst it’s already in motion, Scars tells us the who and the why of this tale. In doing so, Close both literally and figuratively illustrates exactly how apt the title of the book is as this isn’t about the leather jacket-wearing, boxing anti-hero that’s present as early as the end of this book. No, no, no… as it’s eloquently phrased on page one: ‘this is not that myth. This is not the story of the Killeroo. This is the story of Rufus’ and the scars that make him.

The True Story of Killeroo Scars

Like the makings of all great warriors, Rufus’ story begins with malevolence leading to tragedy before an instinct for self-preservation and perseverance takes him on the road towards altruism. Where we begin is with the Australian version of the Weapon X Program with a shade of Yinsen from the first Iron Man movie.

Rufus is the product of laboratory experiments to create the perfect animal weapon for nefarious purposes. After he shows early promise as a specimen, the doctor overseeing the project develops something of an affinity for this cute little creature. He teaches him ethics, morality, and compassion along the way.

The powers that be view this as weakness and fear that Rufus will lack the cold, killer instinct they wanted from the program (how wrong they’re about to discover they were) and order his termination. Affection ultimately wins out as the good doctor sacrifices himself to save Rufus, who demonstrates exactly what he’s learned to enact vengeance of his captors and escape into the vast unknown of the world beyond.

Frightened and alone, he does the only thing that a young kangaroo could do in such circumstances: runs. He runs (or hops) for weeks on end through the harshest conditions on earth, past the point of his paws bleeding, until he finally collapses at the point of exhaustion.

A little departure from the plot for a moment here; as much credit as is humanly possible must be bestowed on the efforts of the aforementioned Mr. Close and RW Adams. They articulate a picture, nay a portrait, with their words worthy of a place in the Louvre. They give us layers of traditional and contemporary cultural narrative without resorting to blatant exposition to move the story along.

The language and tone are as brutal as the unforgiving landscape of where it is set without being overly reliant on harsh language for cheap shock effects. The incredible wording and dialogue resonate deeply powerful and challenging Australian themes that foster real emotional connection between the book and the reader. Whilst incredible on the one hand, it makes what’s about to come that much harder to bear.

Rufus is taken in by a community of Indigenous Australians that not only nurse him back to health but embrace him as one of their own. They create within him the concept of family. Over the years that follow, he learns about culture, survival, and instinct. But more than that, the traditional custodians teach him about the land, its connection to him, and a sense of belonging within him.

Unfortunately, rarely do such stories have happy endings. When peace is finally within grasp, destruction arrives in the form of the Redbacks Biker Gang. In panels that are uncomfortably reminiscent of the all too real custodial history of Australia, the gangs look to drive the Indigenous Australians off the land and it quickly turns from violence to near-total devastation.

In these moments, the Killeroo is truly born. Though he repels the raider’s attack and savagely beats their leader to a bloody pulp, the damage is already done. Having lost everything and everyone, Rufus is alone once more with the displacement from everything he ever knew being the biggest scar that he’s left bearing.

Killeroo Scars: Nothing Short of Magnificent

Everything is captured perfectly in the artwork of Ryan Wilton, which is nothing short of absolutely magnificent. The illustrations not only perfectly capture what life is like in outback Australia and the savagery of unfolding before us, but it also emotes the tragedy of the story.

Wilton’s most powerful work doesn’t depict the violence or gore that occurs in the more brutal parts of the story (though that stuff is pretty awesome). It’s how he illustrates the fear and innocence of a young Kangaroo. The panels of Rufus desperately trying to escape the laboratory, his fear in fleeing into the unknown, and just his happy smile when he encounters genuine warmth is worth the price of purchase alone.

This is a genuine 5-star classic comic book that from page to page, goes from strength to strength. It is an incredibly deep, intelligent, and challenging story with a fast pace and incredible illustrations. Seriously, no downside. If you haven’t heard of Killeroo before or weren’t a fan of his based on subsequent titles, you will be after Scars. It’s a must-have for any great collection.