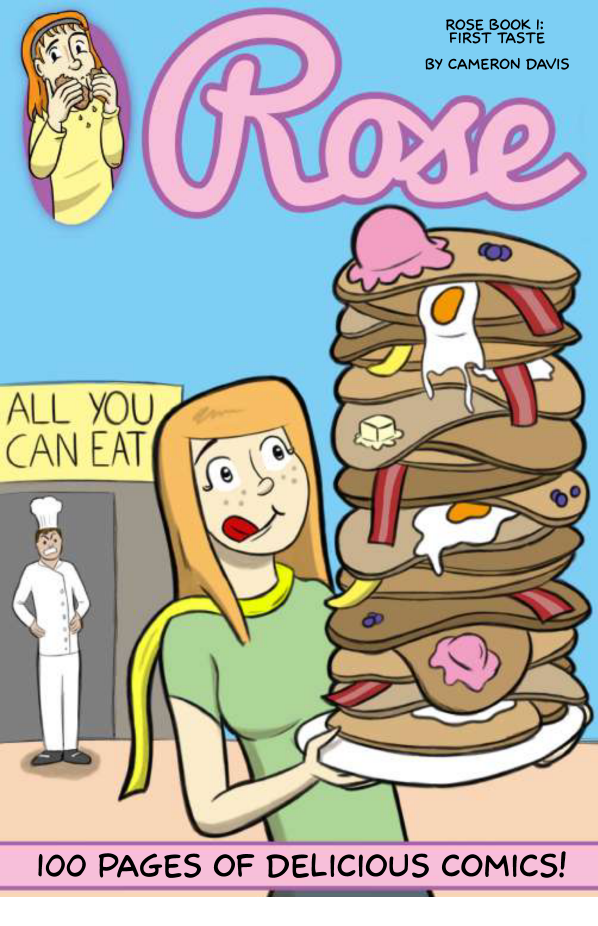 When I was a child, one of the first exposures I had with comic books are Sunday comic strips. These three to four-panel stories were short but dense stories that made me love the mainstream stories even more.

Rose Collection Volume 1 is among those that try its best to invoke the tickle of these Sunday comics. Whilst it is ok in some instances, the comedy gets overplayed and killed by a headache of a main character that only has a few good moments.

Rose… That’s It: The Stories of Rose Volume 1

Rose Collection Volume 1 are a series of Australian indie comic stripes drawn and written by Cameron Davis, with a few guest artists and writers in-between.

Much of the Rose Collection follows around the eponymous character and her misadventures across life. Rose is a transplant from Ireland who moved to Australia to be on her own. Even then, she is ill-equipped to live in the real world.

Rose goes around with friends, workmates, and even family during flashbacks. She also interacts with strangers and bosses - some are even more incompetent.

Most of the stories are self-contained tales, from tales of Rose moving into her new apartment to her legendary appetite. Many stories also revolve around her blabbermouth tendencies and her deep naivete.

I would believe that the writing of the Rose Collection Volume 1 is quite polarising, to say the least. It’s good to believe that it’s effective, not in creating sympathy for the main character but as a way of telling how much of a pain she is to be with.

Rose characterised as your average naive annoyance. She can be well-meaning at times - sweet even. The problem is that she tends to be selfish and inconsiderate of others.

Rose, as a character does not understand the concept of ownership most of the time. She doesn’t understand the idea of personal space, personal ownership, and responsibility in its entirety. This can be problematic, because many of these negative aspects are juxtaposed with her naive sweetness.

I’ve seen many protagonists characterised as gluttons, off the top of my head, Jughead, Shaggy, Scooby-Doo, and even Wally West. Even then, these guys were lovable big eaters who knew the time and place to do things.

Rose isn’t one of these lovable goofs who can quaff meals good for a family. Rather, she inadvertently steals, overeats, and disregards the people around her. Even her family gets tired of her shenanigans at times.

She rarely follows any rules, and people chalk it up to her being naive. It takes you out of immersion, considering this is not how the real world works. Her antics are, sadly, unfunny when she borderline becomes a nuisance to everyone.

It doesn’t mean, however, that this is out of entirely bad writing. There are stories where Rose genuinely cares about people, especially of her friends and family.

Many readers will likely be more than happy to overlook the normally annoying character if they show their good side. Unfortunately, humour garnered from the annoyance of many doesn’t pass as humour.

Rose’s antics at work, disrespecting her boss Josh and loafing around, don’t help at all. If Rose stays like this, it’s hard to find any more joy in her jokes.

Where Cameron Davis came short with the story and characterisation of Rose Volume 1, she came through with the art style. Much of the art is, front and centre, a style reminiscent of Sunday comic strips.

The style and colour remind me of some of the best strips I grew up as a child. These include Archie and Garfield, with art that offers realistic proportions and cartoony colours.

The character designs and background are generally consistent. They’re not the best, but they don’t have to be. The beauty of comic strips is the simplicity of the art and shading.

The colours are vivid and the style is simplistic, reminding me a bit of Penny Arcade. The only problem I see is the inconsistent inking and outlines at times.

Should You Read Rose Collection Volume 1?

Should you read Rose Collection Volume 1? Rose Collection is a love it or hate it collection. Comic strips have a certain demographic, and if you’re the type who likes plot and consistency, this isn’t for you.

The stories of Rose remind us of that friend that we tolerate. She can be annoying. She can be an arse to deal with. Even then, what little kindness she shows can make it up.

If you’re the type who only wants to read a chronicling of someone’s misadventures, Rose is likely something you should check. People who like to project onto their literary heroes wouldn’t like Rose; she is as polarising as a character gets.

Even then, it’s hard to deny that she acts like your average Sunday comic strip heroine. Whatever misadventures she has in the future, I sincerely hope she finds something or someone that can rein in her goofy antics.