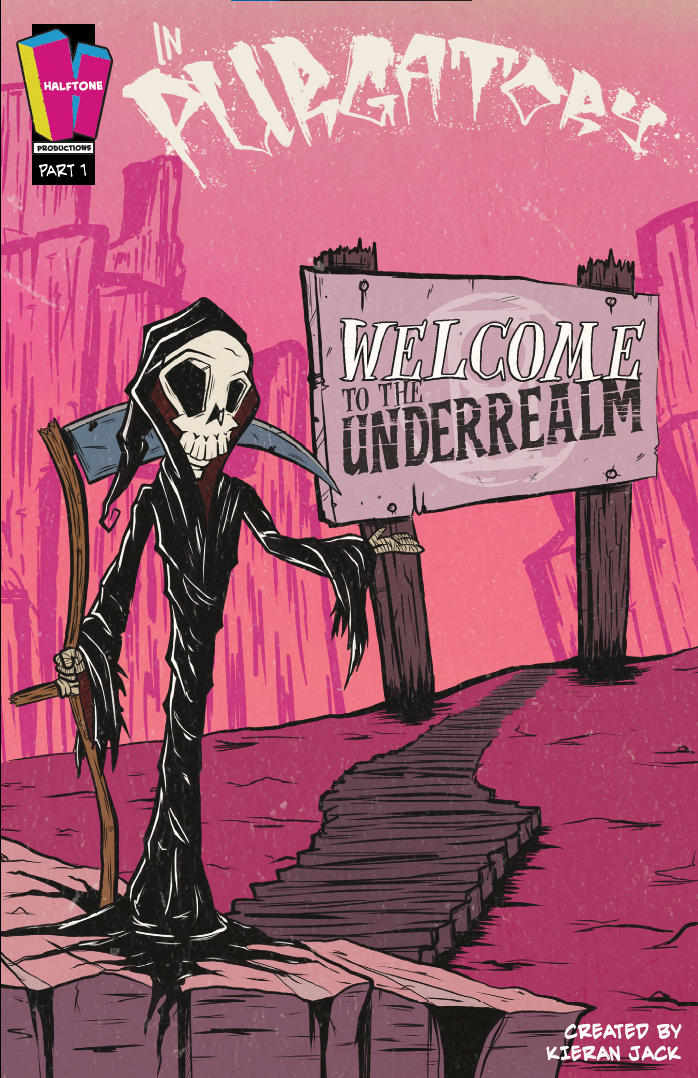 In Purgatory #1 reviewed by Jerome February 11, 2021
Welcome to the Underrealm

What will you do once you reach Purgatory? What can you do in Purgatory? Will you take over Purgatory if you have the chance?

Welcome to the Underrealm is the first chapter to In Purgatory. It’s quite the read, combining fantastic storytelling, good art, and comedic timing to become one of my favourite stories out there.

A Dark, Funny Underrealm: The Story of In Purgatory #1

Welcome to the Underrealm is the first story within the In Purgatory series. This Australian indie comic book is published by Halftone Productions and a solo creation of Kieran Jack. Matt Kyme contributed for page 8.

The story of Welcome to the Underrealm revolves around Grim Reaper, who guides souls to the purgatory. As he observes the loss of life of normal humans, he becomes tired of the cycle of life and death in the overworld.

A Fantastic Tale To Die For: The Writing of Welcome To The Underrealm

In Purgatory #1 is a great story with a beautifully crafted plot, solid introduction, and a coherent world building. It resolves many of the issues that many Australian indie comics experience and can work as a great example for many trying to get their feet wet.

For starters, Welcome to the Underrealm uses a very simple, easy to digest foundation for its story. The plot revolves around the Grim Reaper, much of which has a well-established reputation amongst readers. This isn’t a bad way to start.

Creating an entirely new world is hard. You’re prone to creating storytelling inconsistencies with a new world. Using the Grim Reaper and the Underrealm, however, builds on centuries of backstory that allows you to inject your own twist.

Kieran Jack didn’t rest on this laurels either. He still went out of his way to build the world, creating humorous stories and playing on Grim’s role as a guide. The comedic interplay with religion, which can be a very touchy subject, is also played for laughs.

The golem minions are funny brutes and handwaves the need to show other mooks in the story. Even if there are only a few named characters so far, Underrealm feels lived-in.

The comedic timing is also well-executed, with Grim acting like an irreverent entity with lots of dark humour. As a main character, he stands out a lot, reminiscent of other great “Death” characters like Grim from The Grim Adventures of Billy & Mandy.

The pacing is fast, so I would appreciate it if it slows down a little. The introduction of the mysterious plague doctor is also something to look forward to.

Beauty in Black: The Art Of In Purgatory #1

The art of Welcome To The Underrealm is one of the best I’ve seen in a while. The art style the Kieran Jack uses in the chapter is wildly different from his other stories like The Talking Bread.

His art style is reminiscent of early 2000s Nickelodeon, using great outlines and well-defined caricatures. The panelling is perfect, creating different types of paces depending on the situation.

The comical character design also looks gorgeous when juxtaposed with the blacks and whites. I’d like to say that I’ll enjoy this if it was coloured, but I’m also enjoying it washed out as it is.

The blacks, whites, and greys work well with the cartoony aspect of the characters. The inking is perfect, with clear delineations between different situations. It’s also great that there are several shifts in art style in between.

For example, the flashback to the real world uses a more realistic proportion. The underrealm, however, uses clear, cartoony designs. The delineation is superb, and the design is super cute.

Should You Read In Purgatory #1?

So should you read In Purgatory #1? Yes! Welcome to the Underrealm is an excellent opener for what seems to be a superb series.

In Purgatory #1 offers a fantastic world ahead, with a tale of loyalty, betrayal, and exploration. I’m expecting for us to see more of Purgatory, its denizens, and the grand race to control the Underrealm.

I’m expecting to see more of the Grim Reaper, who he is, and who everybody else is. There is a ton of story to tell, and this series can go to many directions. Even then, knowing Kieran Jack is at the helm gives me peace of mind that it’s going to be a solid story.

With this story and art, we’re in for a good time with In Purgatory.