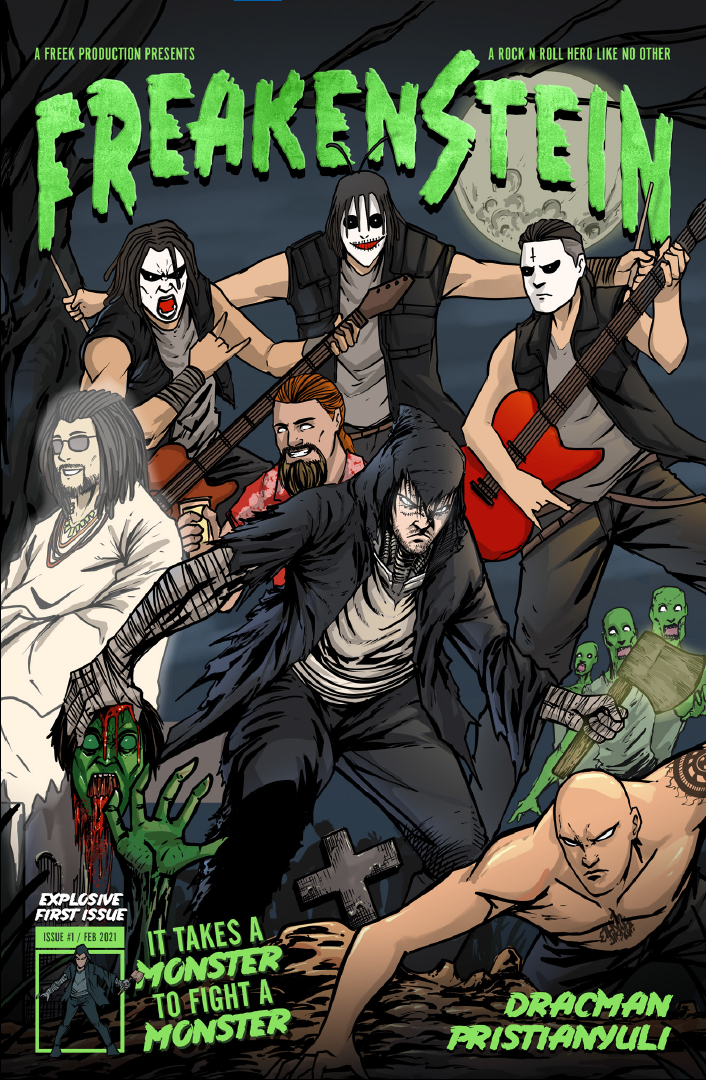 Metal, guts, gore, and zombies. It’s a good day when a comic book ticks all these boxes for me, and today’s a good day.

Freakenstein #1 is as crazy as it gets, with its Justice League Dark meets Metalocalypse meets DCeased type of gig. It’s as awesome as it gets, and you’ll find yourself enjoying the wildest ride of your life.

Freaks of Nature At the End of the World: The Story and Writing of Freakenstein #1

Freakenstein #1 is an Australian comic book published by Freek Productions. The story is written by Jesse Dracman, with art from Pristianyuli and layouts by Aaron Sammut.

Freakenstein follows the character of the same name as he moves around a post-apocalyptic landscape of zombies. The zombies here are not like your typical ones, as many of them were infected by a social media and music app.

The protagonist himself hides a freaking awesome secret as he culls down the horde. As he moves about, he discovers more people like himself and how they’re surviving throughout the scorched landscape.

The writing of Freakenstein is among the most fun things I’ve read in a while. It’s neither the deepest nor the most eloquent comic book out there. Heck, it’s not even the least bogan script I’ve read over the past month.

None of that matters here.

Freakenstein is a perfectly paced action comic that goes balls deep in making sure the reader gets their money’s worth. It’s fun, cool, and fiddles the fantastic trappings of a post-apocalyptic story gone wild.

Freakenstein himself is a lot of things to a lot of people. To himself, he’s just a cool lad looking to break zombie skulls. The movement of the story is quite good, albeit a little too straight forward.

The entire premise of the story is similar to that of Tom Taylor’s DCeased, where humanity became mindless zombie-like creatures because of the internet. Here, Jesse makes a point to use the “technology makes us zombies” as literal as it can be.

Even then, this story is not even near the saga that DCeased is, and it shouldn’t be. It’s a fun comic of a guy killing randos and treating his new world of the zombie plague. With all the popped eyeballs and the smashed skulls, it’s impossible not to love it.

Even if the story feels mindless at face value, it’s the intangibles that will make you fall in love with it. Jesse made sure to start the story at 100% energy and push it past its limit and create a crescendo of events.

Every page you turn, a new surprise happens. It’s bonkers and anyone who gets bored of this story needs some new stitches on their funny bone.

Speaking of picking bones, if there’s anything the story is missing, it’s mostly general direction. I understand that the story is trying to establish how cool the characters are, but a more coherent narrative direction will help the next chapter if it ever comes.

Maximum Chaos: The Art of Freakenstein #1

The art of Freakenstein #1 is among my favourites within the stories I’ve reviewed and read, with Wizard of O2 and The Wrath of the Cursed among the others. Even then, whoever Pristianyuli is likely enjoyed illustrating this comic book.

Much of the pencilling and inking feels fresh and action-packed, with every motion and splatter drawn to perfection. Much of the art reminds me of technical pen art, with thin outlines here and there and inked with a black permanent marker.

The art could’ve worked better with a little splash of colour at some point. A colourist can enhance the entire thing; make it feel more alive and grisly. A zombie story like this can even work better just by adding reds to make the blacks stand out.

At the same time, I understand the death metal aesthetic that they’re trying to achieve. I can also see how Pristianyuli kept some intricate pencil designs uninked, especially the floral prints on Chippy’s shirt. Whether these are remnants they had no time to remove or intentionally left there adds to the texture of the art.

The storyboard style looks grungy, but the layouts done by Maurice and the Metal’s Aaron Sammut put everything in its rightful place. The chaos is enough to make the pace as fast as it can be without making it a mess.

Is Freakenstein #1 A Must Read?

Should you read Freakenstein #1? This story is a fun roller coaster death metal adventure into zombie land. If you love your blood, guts, and gore, you’d love this comic.

The entire thing is a trip from start to finish, so you’ll enjoy it for sure. Give Freakenstein a ride. It’s worth every dollar you have in your pocket.