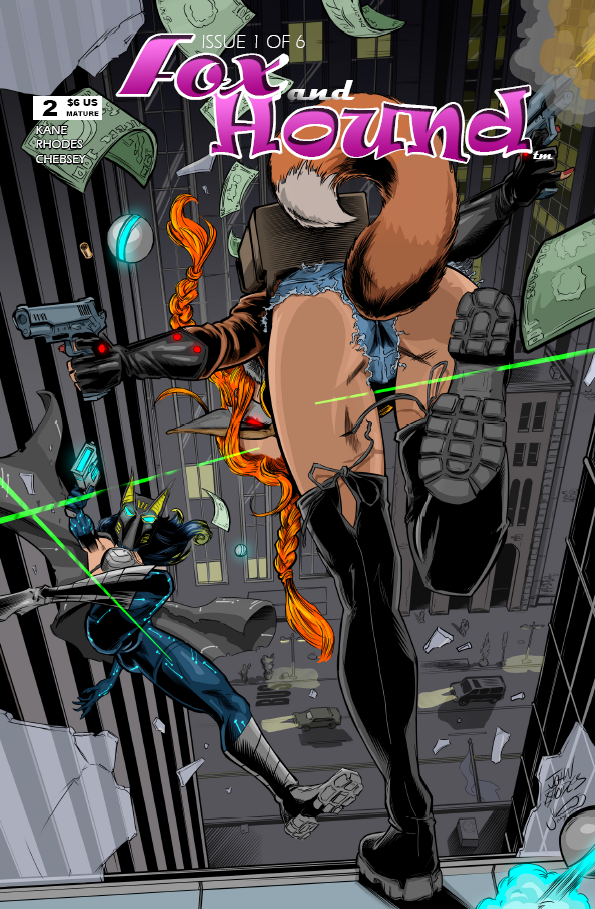 The femme fatale is a master of weaponised femininity, and it treads the thin line between empowerment and hypersexualisation. When tastefully done, it’s one of the most powerful storytelling tools that create supremely strong women.

Fox and Hound #1 is one of the most mature femme fatale heist stories I’ve seen ever. Whilst it is unafraid on how to use sexuality as a storytelling tool, the story stays classy from start to finish. The story is oozing with unrestrained sexual tension and women using it to blaze a trail.

The Story and Writing of Fox and Hound: Two Girls, One Heist

The story of Fox and Hound follows Charlie "Hound" Minc and Lena "Fox" Petrov. They are two bandits who are on the hunt for a MacGuffin for another organisation, uncovering a mystery as they go. As they move around, they also play around like naughty kittens at night.

At the surface, Fox and Hound #1 feels like a story of two err… foxy ladies who are very much into each other and into deadly heists into unknown territory. Both Fox and Hound have a great power dynamic between them, balanced by their give and take relationship.

Their romantic and sexual relationship is as playful, if not a little bit more, than many of these types of partnerships. Hound works as the more diligent and crafty one, whilst Fox is the straight player who enjoys the heist.

N.S. Kane is one of the best storytellers I’ve read in a while. In the short time I’ve known her stories, which I’ll review in the future, I’ve seen how good she tells her tales.

The way she creates nuance in human sexuality talks about a person who finds empowerment in telling tales of strong, independent women. She weaponises femininity but to a degree that it is both classy and provocative. Kane knows how to use the idea of “sensual” as a way to tell a story.

Sensuality as a storytelling pillar is a great way to create a sort of mystique. Sure, badly utilised lust can be disastrous to a writer who don’t understand the topic, as it only reinforces the stigma connected to it. Even then, N.S. Kane has a way of telling stories that are sensual but also formative.

Both Fox and Hound remind me of Bayonetta, another strong female character. All three women are the same: strong, feminine, and doesn’t care what you think. It takes a special kind of writer to make such a character, and N.S. Kane is one of those.

The Art of Fox and Hound #1: Crazy Awesome Women

The art of Fox and Hound #1 is marvelous, with several talented artists sharing the load between them. Each one of them did a fantastic job, creating a comic book that is as good as one can have it.

It’s the first time that I’m seeing the work of John Rhodes, and I’m wondering why is that. His pencilwork is remarkable, with clean lines and quality reminiscent of the work I normally see in Dynamite Comics.

For the uninitiated, Dynamite Comics specialises in publishing female-centric comicbook stories. Characters like Red Sonja, Dejah Thoris, and Vampirella are in a similar vein to Fox and Hound. They are also known for their “quality more than quantity” mantra.

The inking by Shane Chebsey made every page pop out, with superb shading in different situations. It’s a feast to the eyes, and the colouring is as professional as it gets. Whilst there are some minor inconsistencies here and there, these are as small as they come.

Together with N.S. Kane’s story, they offer a story that pulls you right into their world.

Should You Read Fox and Hound #1?

Should you read Fox and Hound #1? The answer is a definite yes. The entire comic book is a complex, confident, but sensitive use of sexuality. It is action-packed and there’s never a dull moment in it. I'm looking forward to reading the next installment of this six-part story. I'm sure we're in for a treat.