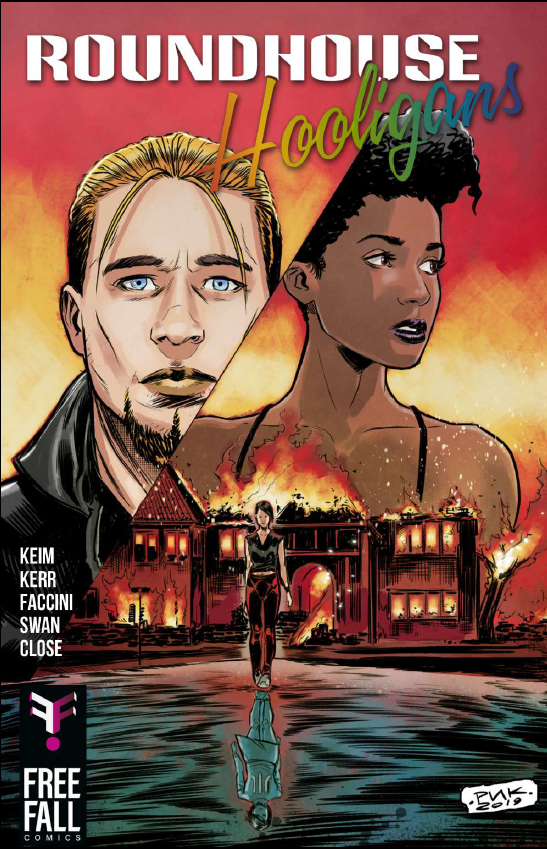 Dramatic comic book stories are harder to find now. In this age of superheroes, pure drama stories need to jump at you, and this is how Roundhouse Hooligans Issue 1 does.

Roundhouse Hooligans takes readers to a mature story of pain, loss, and hope. It does not handhold readers through a tale, but rather brings everything front and centre. How the story connects to you will depend on how much you care.

The Pain of Hope: The Story and Writing of Roundhouse Hooligans

Roundhouse Hooligans Issue 1 is published by Free Fall Comics. L.A. Keim is in charge of the story, with Brian Kerr as the co-writer. The art was made by Riccardo Faccini, with Livia Pastore handling the pin-ups and posters. The colours are courtesy by Kirsty Swan whilst Darren Close handled the lettering for the comics.

Roundhouse Hooligans follows Torrance and her quest to find her sister after the brutal attack that orphaned them. As she is haunted by bouts of inadequacy and a missing sister, she is hellbent on finding the latter, with the help of a few people along the way.

The writing of Roundhouse Hooligans feels something straight out of HBO drama titles. The narrative is mature, clean, and insightful, with a good penchant for tropes. It reminds me somehow of Sons of Anarchy, but less sappy.

L.A. and Brian did a good job of showing a tale rather than telling. The conversations are natural and the progression is logical. There is no jumping around the story, but rather a clean, chronological look at what currently happens.

The story follows the standard Orphan’s Ordeal trope, which is perfectly justified at the start of the story. Rather than following the strong male father, the story followed the vulnerable daughter/sister. The entire process allows for emotional investment in a well-rounded protagonist.

Much of the story is anchored in reality too. In most stories, most mooks will die at the hands of a character outnumbered. Most stories will add plot armour to named characters; that doesn’t happen here.

Keim and Kerr protect their characters from neither harm nor death. They don’t give them weapons and arms to take on the figurative threat. Rather, all they have among themselves is a bat, their grit, and determination, which results in unpredictability for the story.

The only potential problem I see with the story is the lack of crescendo. Apart from the obvious flashback, the entire issue ran generally flat. I understand it’s an introductory issue, but the cliffhanger can be hit or miss.

There’s also very little investment on the side characters so far. Torrance, as a character, is front and centre, but everyone else feels like fodder that may die at some point.

The art aesthetic of Roundhouse Hooligans is as professional as it gets. It feels beautifully made, smooth, and punk-noir-ish. Riccardo did a great job drawing a world that feels as professionally made by a DC Comic.

The art style is evocative and clean, with shading techniques that I’ve seen in creations of Garth Ennis and Gabriel Ba. Every stroke and outline is clean - probably the cleanest art style I’ve seen across all titles I’ve reviewed so far.

The use of screentones is deliberate but smart. It doesn’t destroy the beautiful inking done on the comics but it’s present to create clean, crisp panels. Riccardo also know when to make do with fewer details and where details matter more.

The colour work done by Kirsty Swan is solid and logical. There is no bad use of colours or gaudy style that took away from how gritty the story is. She was able to accent the dark and grey tones to keep with the tone the story is trying to approach.

Even the lettering done by Darren is as good as it gets. It doesn’t get in the way of the story. It doesn’t cover up important panels and the reading order is clear.

Should you read Roundhouse Hooligans Issue 1?

Issue 1 does not have, as a story, have some sort of immediate payoff. It will take time for you to absorb the story and enjoy it, and if you do, it’s worth the reward. The drama-punk story is solid, and checks all the boxes on what should be a mainstream title.

Roundhouse Hooligans doesn’t feel like a comic made in the backyard just because the team felt like making one. It’s a great dramatic story, and if you like well-written titles, this is for you.