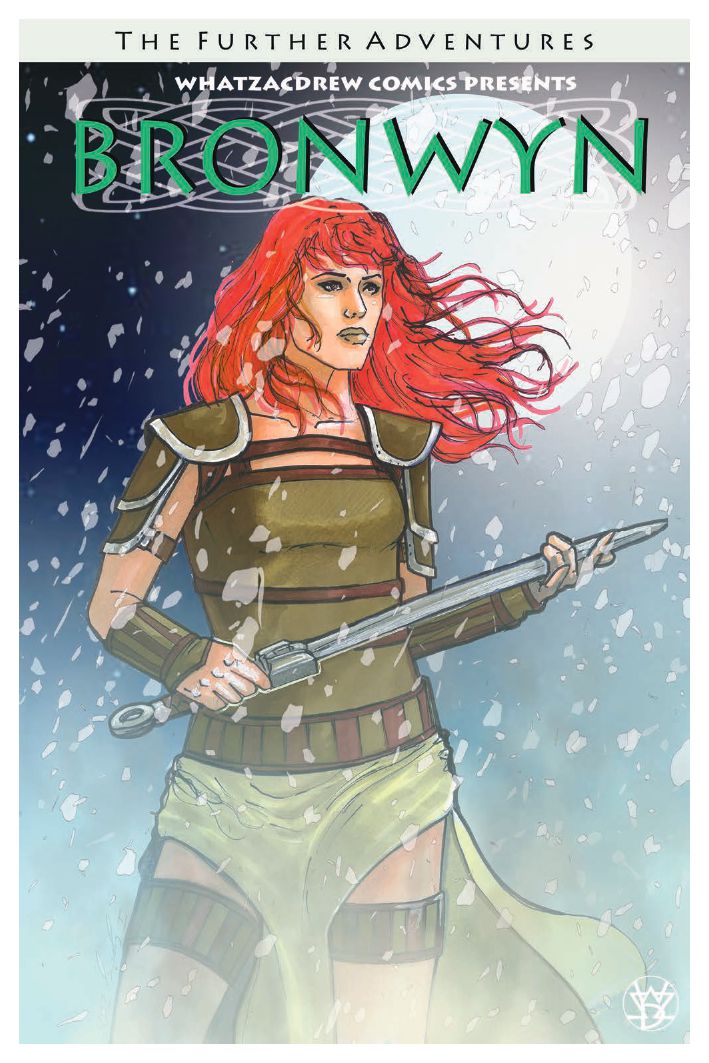 Bronwyn: The Further Adventures #1 reviewed by Jerome February 10, 2021
Rise | The Kelpie | The Slaugh

Celtic mythology is rarely represented in comic books, much less in an Australian comic book. When I saw Bronwyn: The Further Adventures, I immediately believed it to be among the most unique tales out there, and I was right.

Isaac George has a beautiful story to tell through Bronwyn, and similarly gorgeous art to boot. With that said, it’s hard not to crave for more. I would like to admit that I love the concept a little too much that I wish for some more.

A Mighty Warrior Is Born: The Story of Bronwyn

Bronwyn: The Further Adventures is an Australian comic published by Whatzacdrew Comics. The story is written and drawn by Isaac George and contains three stories: Rise, The Kelpie, and The Slaugh.

The story of Bronwyn follows the story of the character of the same name, a fiery, red-headed warrior who received the blessings and protection of the Celtic deities. She is favoured by the gods and trained since childhood, slaying beasts wherever she goes.

Within the stories, she is seen fighting divine beasts and deities. She was once tasked to protect a boy, only to lose him to a demon. Bronwyn also went on to free the souls of people absorbed by the Slaught, with her lineage discussed by a secretive order who chronicles her exploits.

One of A Kind Tale With A Few Problems: The Writing of Bronwyn

Bronwyn is one of the rare treats that you won’t find anywhere else. There are many stories that discuss the exploits of Vikings and their ilk, but you’ll find almost no story about Celtic lore - be it indie or mainstream comics. It’s quite unfortunate, considering the colourful stories the Celts have.

Apart from Boudica, tales about the fairies of the Tuatha De Danann, the Fomorians and Balor, Nuada Airgetlam, and Cu Chulainn are too few. These are colourful epics and tales that stayed within the borders of the Celtic Nations.

Isaac George was able to invoke the feel of old Celtic epics through Bronwyn, a Welsh name that means “white breast”. The way that Isaac tells the story is unique, with both its ups and downs.

The charm of the story comes from its seemingly alien style of storytelling, where alien in this situation is more a compliment than a complaint. The structure does not follow the traditional hero’s journey that Joseph Campbell established.

Rather than create a crescendo, Isaac thrusts readers head-on, as if we are disembodied witnesses to a tale. Due to this perspective, we see everything as they happen, as if we’re there.

Many stories do the same style but most witness the story like it is being told back. As readers, we are witness to details not privy to the characters in the story. In Bronwyn, we only know as much as the characters themselves, which is both good and bad.

For starters, knowing only what Bronwyn knows gives a sense of action and mystery. We run as Bronwyn runs, and we experience first-hand how it is. Even then, this kind of storytelling puts us at a disadvantage.

Even after reading the story, at one point even getting an exposition of Bronwyn’s past, I still don’t know much of the character. What are her motivations? What keeps her going? What’s her goal?

The story felt like sitting through an episode of the 90s TV show Xena: The Warrior Princess, and I missed the pilot. People are lost, and it goes unexplained what happened after, mostly without a conclusion. Characters talk vaguely, as if readers are expected to put pieces of the puzzle together.

The story comes a bit short too. At 20 pages, with around half of which dedicated to a three-chapter tale, it could’ve been a bit longer.

Beautifully Hand drawn: The Art of Bronwyn: The Further Adventures

There’s neither art nor art design to compare Bronwyn to, and it’s one of the reasons I was among the backers of this unique tale. Drawn with almost purely pencil and what seems to be watercolour, the art of Bronwyn puts the entire tale under a perspective.

The feel of the art evokes a very Celtic nature to it. The panels are beautifully pencilled, with much of the colours popping from the uniquely hand drawn outlines. There is liberal use of grey tones, creating a unique style similar to designs from the ‘80s.

Bronwyn herself is beautiful and powerful, with a striking resemblance to actress Jennifer Garner. I’m not sure if the semblance is coincidental or not, but it works nicely. The nod to Boudicca, described historically as a tall redhead, is wonderful.

So far, the only problem that I saw with the art are the action shots. Whilst much of the action looks great, there’s a noticeable lack of motion. The fight scenes between characters are either not shown or relegated to small, non-consecutive panels of limbs.

Should you read Bronwyn: The Further Adventures?

Should you read Bronwyn: The Further Adventures? Yes, even with its flaws, the potential is there for the story. It is a unique take on Celtic lore and what little tales there are from the genre in comics.

The art and story of Bronwyn have an X-factor that’s hard to deny, which makes it extra special. If Isaac George decides to pursue the story further, it would be perfect to read a longer, deeper take, together with all the trappings of the myth surrounding her character.