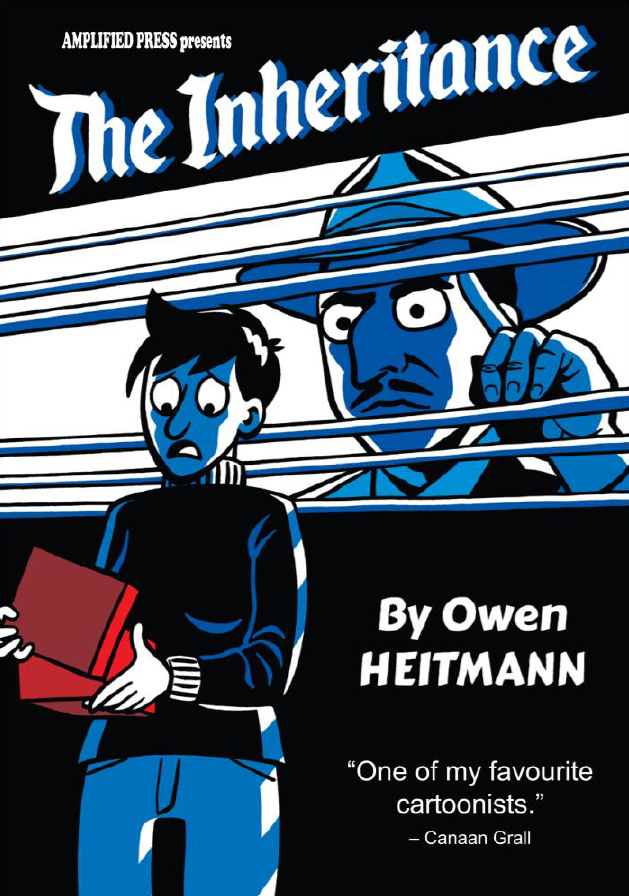 “I’d better call the police to report a dognapping! Also, they might be interested in that corpse on my doorstep.”

A knock at the door. A corpse with a gift. The arrival of a mysterious benefactor and the reading of an inheritance. When Chloe Stevens fell asleep reading the Careers Section, she never could have predicted the bizarre series of events to which she would wake…

Consistency is the Key to Success

In his 2019 crime comedy The Inheritance, Owen Heitmann fully embraces the dry, sarcastic humour that has become characteristic of his works. The characters deliver silly yet strangely realistic reactions to each event, referencing overly specific horoscopes, misunderstood quantum thought experiments, and a questionable courier system.

This consistency of tone allows the comic to excel on two main points. First, the well-paced increase in tension and ridiculousness enables the plot to culminate in a brilliantly unexpected but very effective ending. Second, while the antagonist explaining their diabolical plan in a lengthy monologue has become tiresome in most other fiction, Heitmann cleverly subverts this cliché with a sneaky plot device. The reliable development of humour up to this point means readers can readily accept and enjoy this twist because it matches the established tone of the work.

Heitmann also uses visual storytelling to emphasise the irony of certain dialogue and to heighten the sarcastic tone. This is particularly evident when Chloe delivers two successive, yet obviously conflicting, opinions regarding her uncle, accompanied by the only sequence in the comic to feature diagonal panelling.

Once again Heitmann proves his aptitude for action sequences, a skill very much at home in this chaotic crime drama. New plot events happen in quick succession but Heitmann flows from one to the next with ease, his characters running so fast across the page they’re almost flying!

The monochromatic interior artwork lends itself very well to the crime genre. This is supported by elements of the front cover being borrowed from the theatrical poster for the film The Dark Corner (1946). While there is very little in The Inheritance of the cynicism or fatalism that typically describes noir cinema, referencing this poster works to heighten intrigue and suspense. This, in tandem with the red box, makes the cover very striking and teases that Chloe is part of a bigger plot than she realises...

A Picture is Worth a Thousand Words

Heitmann keeps most panels quite clean, utilizing simple backgrounds and set pieces. Yet, there are a few moments where use of dialogue feels heavy or superfluous. Understandably there is a level of necessity in a story comprised of only two characters to employ dialogue to support exposition and plot progression. However, occasionally Heitmann could have replaced dialogue with alternative methods of delivery or left already great visual panels free of accompanying text.

For instance, Page 8 demonstrates that Chloe's dog, Killer, has been stolen. This panel is accompanied by Chloe crying, "Gone!" at an empty room. The previous two panels on page 7 though, plus the broken window, flapping curtains, and shocked facial expression on page 8, seem ample indication of this incident. Chloe's exclamation feels excessive. Heitmann has proven himself a talented visual storyteller and it would have been nice to see him embrace this more.

If a corpse mysteriously appeared on your porch, what would you do? What if you came face-to-face with their murderer? Chances are you wouldn’t react like the entertaining, if a little flawed, characters featured in The Inheritance.

Protagonist Chloe Stevens is perhaps the most unfazed character to ever exist, let alone as one in the middle of a murder mystery. She’s fresh, sassy, just a bit devious, and knows exactly what she wants and what she’ll do to get it. Even if that does place “solve dognapping” above “report murder” in her list of priorities.

The Unnamed Antagonist is equally refreshing, coming across as almost endearing in his attempts to be evil! Like a respectful vampire he waits to be invited into Chloe’s home and in one amusing sequence even allows himself to be shoved back onto the doorstep when Chloe puts the pieces together!

While it would have been nice to see a little more depth to these characters, and their motives for wanting the inheritance, they function well within the self-contained nature of the comic. Stripped back to their bare bones, Heitmann’s main characters are quite similar, both greedily trying to outwit the other and unaware of the consequences of their actions. Who wins? Well, you’ll have to wait and see…

Last Will and Testament

At its heart, The Inheritance is a crime comedy. But while the premise is relatively straight forward—protagonist awakes to find a body on their doorstep beside a mysterious box—the ensuing story is so amazingly wacky that I dare anyone to attempt to predict how it all turns out! As such, I’ve refrained from spoiling this wonderful story as much as possible for potential readers. You’ll just have to experience it for yourselves!

The Inheritance can be purchased via Amplified Press at https://amplifiedpress.com/product/the-inheritance/?fbclid=IwAR0sDheIdcya1pIxpUjh0W-ln9h2HR4mQXA7K7oScL-CGvxX-hJmNkbdCGk.