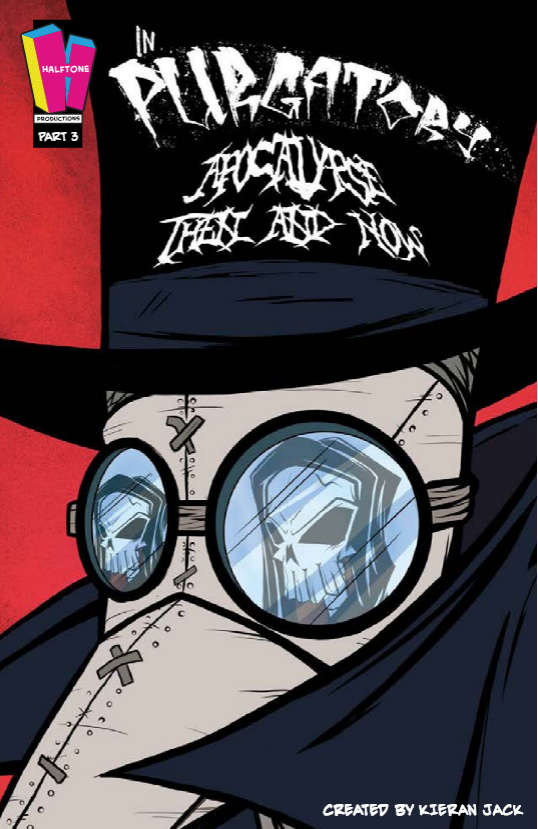 In Purgatory #3 reviewed by Jerome February 13, 2021
Apocalypse Then and Now

It’s rare to see the words “Four Horsemen”, “comedy”, and “fantasy” in one sentence. Even then, In Purgatory #3 has the Four Horsemen of the Apocalypse in a fantasy-comedy comic book! That’s awesome.

In Purgatory #3, titled Apocalypse Then and Now, is the best chapter of the series so far. Not only has the quality of the art improved so much, the story is also starting to create more complexity - even more than the last chapter.

The Four Horsemen: The Story of In Purgatory #3

In Purgatory #3: Apocalypse Then and Now is an Australian comic book published by Halftone Productions. The comic book is written, pencilled, and inked by Kieran Jack. Guest artist Angie Spice contributed page 4 and 5, with lettering by Bradley Adan.

The story follows Grim Reaper and his new exploits after losing both the throne and his ripper scythe. After the events of the last chapter, he is now in search of The Behemoth and goes through the land with old allies.

Right now, Grim is exploring with the other members of the Four Horsemen, namely War, Conquest, and Pestilence. As they explore, the Reaper questions his capabilities due to his continued failures.

Characterisation At Its Finest: In Purgatory #3

In Purgatory #3 is quite the development into Kieran Jack’s creation. The introduction of the Four Horsemen into the story is a superb addition, adding some support systems into the bleak adventure of Grim Reaper.

Historically, the Grim Reaper has always associated with the Four Horsemen as a group. Their addition into the story is adding more personality and anchor’s the world-building even further.

Their inclusion into the story is as organic as it gets and the seamless transition is satisfying. Their characterisation is awesome too. War is logical but hot-headed, whilst Conquest is carefree and brutish. At the same time, Pestilence is clear cut and logical.

As for the storytelling, Kieran Jack asks the deeper purpose of the hunt for Behemoth. He makes Grim question his motivations - ask questions about his obsolescence and his own demise.

Whilst the plot does not progress as much with this chapter, the story as enjoyable as it can be. It is full of what essentially defines the In Purgatory series: treachery, scheming, and manipulation whilst keeping everything light and funny.

Prime Kieran Jack: The Art of Apocalypse Then and Now

More stellar than the writing of Apocalypse Then and Now is the art of this chapter. Across the last three chapters, this feels like the one with the best art so far. The art is not only compelling, it’s enjoyable too!

Let’s start with the cover of the chapter. I’ll first admit that I’m a sucker for gothic imagery, and the cover art is stellar. Beyond the fact that it’s a plague doctor, I’d also admit that his art design is the best in the entire comic.

The top hat, the beak mask, and the trench coat is sleek. I might as well admit that the entirety of Four Horsemen are better design than most of the cast. War as a calm, collected, logical female is a nice touch, whilst Conquest as a muscular brute is cool.

Going further, the inking of In Purgatory #3 is something I enjoy a lot. The use of shade works better now more than ever, and there are no excessive greytones in the entire story.

When you read a comic book of this quality, it makes time fly by. It’s an enjoyable comic and even the art, by itself, can carry the entire story.

Should you read In Purgatory #3?

Should you read In Purgatory #3? For those looking to experience the zenith of the series, Apocalypse Then and Now is the answer. It offers a good insight with how good Kieran Jack is, both as a writer and an artist. Apocalypse Then and Now is a fantastic read and very easy on the eyes. It deserves to get the support of Australian comic book fans, as it’s hard to see quality similar to what it gives.