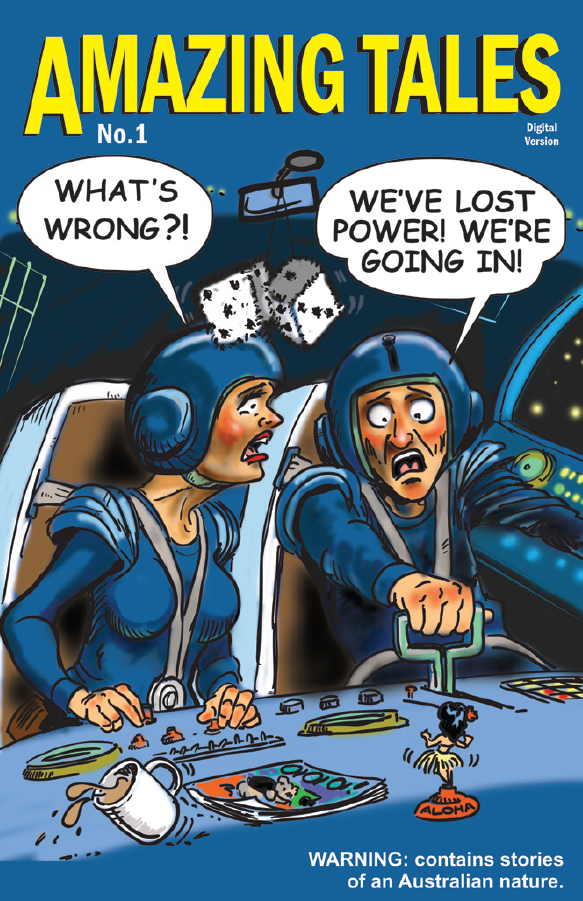 One of the most unique aspects of Australian comics is what we know as “Australiana”. The concept is the adaptation of Australian culture stories, giving them a uniquely Australian flavour. Within these concepts are stories that push for a specific local feel.

Amazing Tales #1 is one of those Australiana anthologies that are rare enough to find. They give off a rustic feel to them, no matter if it’s light comedy or a thoughtful aesop. These short stories are not only fun but gives you a light, fuzzy feeling.

The Stories of Amazing Tales Issue 1

Amazing Tales Issue 1 is the premiere issue of Amazing Tale, an Australian indie comic book anthology. The story is written and drawn by Dave Dye. It is a collection of several short stories.

Amazing Tales is divided into four different short tales: Office Romance, The Runaway, Bad Karma, and A Ringer’s Yarn. Each story offers a different look into Australian culture, whether it’s from the past, present, or the future.

The Story of Office Romance

Office Romance is among the weirdest stories in the bunch, so it’s a good thing that it’s out first. The story follows Suzy and Sherbert, the pilots of Dropship #15 as they land in a warzone. Sherbert, unbeknownst to Suzy, plays a prank on her that entangles the latter on a silly joke.

The story of Office Romance is funny and quirky tale. Dave Dye’s writing is great for quick bursts of emotions. The interplay between characters is strong, funny, and mercurial. For a quick story, this is a great quick read that has a jokey ending.

The art of Office Romance is a testament to Dave Dye’s mastery of his process. The style is quite old-school, reminiscent of newspaper comic strips. It speaks of Dave Dye’s influences, which, if I may opine, likely comes from the Silver Age of Comics.

His style brings me back to a time where my mum was barely a lass, so it’s wonderful for nostalgia purposes.

The Story of The Runaway

The Runaway is a different beast altogether, inspired by the Cattle King by Ion Idriess. To the younger crowd, Idriess is a legend within Australian writing circles for his many tales and short stories.

The Cattle King is a biographical tale about Sidney Kidman, one of the richest Australians of his time and a renowned pastoralist. He represents an icon similar to American industrialists Andrew Carnegie and John D. Rockefeller.

The story of The Cattle King is one for the books. It’s a nice story that feels like it fits better in a textbook than comics, but it works nonetheless. While we’re all used to action-packed fights of other titles, The Cattle King is both thoughtful and sensitive.

Whilst Dave Dye can’t help but insert his brand of subtle comedy, the story is as sensitive as it is. It’s quite the aesop, all things considering. It’s a fun tale that lets Dave’s art skills do the talking.

The Story of Bad Karma

Bad Karma is a different story, and another with an aesop too. The tale follows Johnno, a Vietnam War vet who is starting to develop sadism by harming small insects and animals. As the story goes by, everything develops into something unexpected.

Much like The Cattle King, the story is also more reminiscent of stories we find in children’s textbooks. Beyond that, this comic story works as a testament to Dave Dye’s storytelling techniques.

His art is fluid and easy to understand. The pacing is clear and intentful. His panelling is crisp and clear, showing off his great skills as a visual storyteller.

The Story of A Ringer's Yarn

A Ringer’s Yarn is one of the weirder bits of story in this, working as a sort of cautionary tale. It follows a small group of cattle ringers who has a stranger work for the drove. As the day goes by, they learn of the new ringer’s fate, stranger still all the way.

Among all the weird bits that Dave wrote, this one felt the weakest so far. As a reader, I was taken out of the scene as soon as I started. It takes a moment to understand what the story tried to communicate.

Stylistically, however, the art is as good as it gets. Its art fits the time period and is as Australian as it gets.

Should You Read Amazing Tales #1?

Should you read Amazing Tales #1? If you’re into Australiana-style stories, this anthology is right up your alley. It’s not for everyone, but it’s a good book with a lot of wholesome, thoughtful stories.