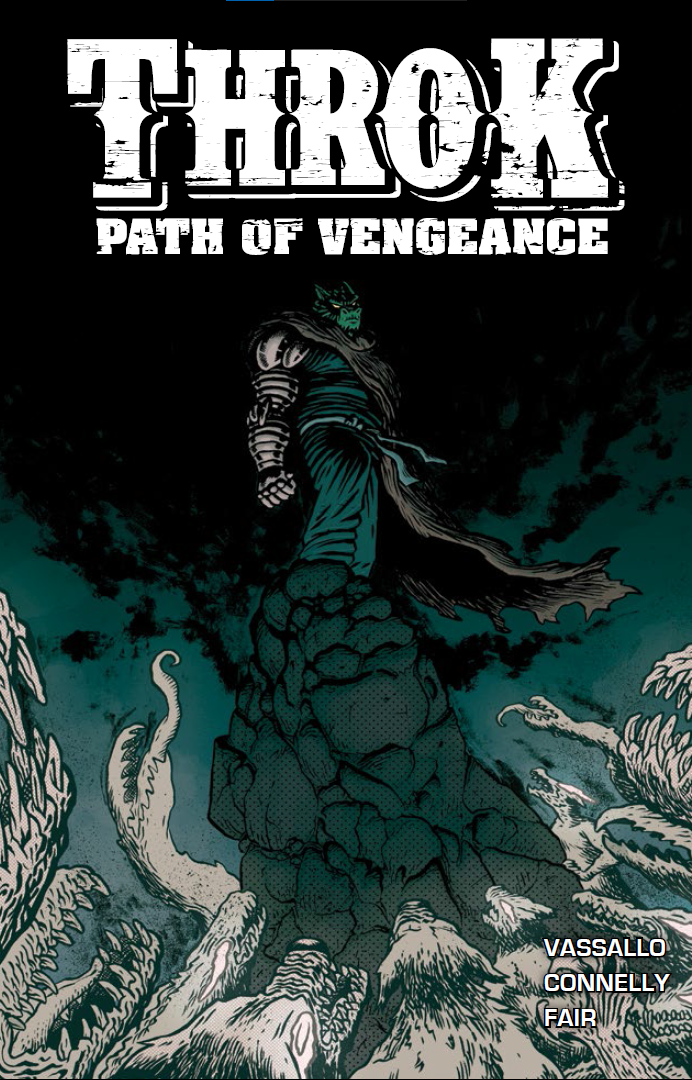 Stories of noble warriors traveling the world have populated many legends. Stories like Andrzej Sapkowski’s The Witcher to the epic of Sun Wukong’s Journey to the West became legends for their odyssey. Not many comics, however, follow such an adventure.

Throk #1 is among those stories medieval fantasy stories that offer revenge, failure, and acceptance. Whilst those may sound something that don’t work in a vacuum, Throk creates the start of a wonderful epic that ends with a rather bittersweet tinge.

A Modern Medieval Epic: The Story and Writing of Throk #1

Throk #1 is an Australian comic book published by Ravengear Studios. The story is written by Zakh Fair, with art by Luca Vassallo and lettering by Damian Connelly. The original concept for Throk came from Brendan Sullivan whilst Ben Mitchell is in charge of publication design.

The story of Throk follows the titular character - a dragonkin monk of the Ghost Lotus order. As part of the order, he works as a mercenary, doing several quests for money and information. Along the way, the disciplined monk meets Aldo, a young reptilian.

As both characters adventure, they meet several challenges ahead. They also discover things about each other that will take the other by surprise.

The writing of Throk #1 is reminiscent of The Witcher and The Elder Scrolls: Skyrim. The setting is a fantasy world of anthropomorphic animals, kins, and how they go about in a cruel world of death and undeath.

So far, Throk feels like Geralt of Rivia - a wayward mercenary looking for purpose and finding his way around the world. Aldo, on the other hand, has the same feeling as a Young Cirilla. It’s even safe to compare the story to Andrzej Sapkowski’s Blood of Elves, which is the start of The Witcher’s “current” timeline.

Through all these comparison, Throk #1 is still unique in many ways. For starters, a story that uses no humans at all is brave, considering the penchant of readers to fail to connect to non-human characters.

Throk is polite and disciplined, but a true warrior within. He’s written to be as human as possible, even with his arcane way of speaking. Throk laughs, jokes, lectures, and educates when he needs to. He is also a victim of his own temper at times.

Aldo, on the other hand, works as an exposition device. He asks questions to enact world building of the story, specifically the magicks and faiths of the world. The plot is clean and without plotholes, albeit could’ve used more showing than telling.

The exposition dump between Throk and Aldo lasted a few pages too long. It ran its course but quite dried up.

A Reminder of A Millennia Ago: The Art of Throk

There’s something I can’t put my finger at in regards to the art of Throk #1. The style is reminiscent of designs and iconographies used in old fairy tales. Luca’s art has a level of perspective similar to medieval art frescos seen in church walls.

I’ve seen this art style before but not in comics, but rather in ancient art. The art design has a Romanesque feel to it - evoking a 12th to 13th-century look. I will even go as far as compare it to Norman-Sicilian designs of sceneries in the part.

I’m not too sure if the style is Luca’s own or it’s designed to evoke the period, but it’s as unique as it gets. Even the colour palette used is faded and dulled out, evoking the usual browns associated with medieval fantasy.

The art is fantastic and the low-saturation makes the story feel dated, craggy, and dusty - all for the better. I see no problem with this art and would even give it full marks.

Should You Read Throk #1?

Should you read Throk #1? If you’re the type who finds themselves immersed in medieval adventure, this is a story that I recommend. It picks up after a slow burn on the first few pages and it’s quite satisfying to read.

I’m looking forward to reading the next issue and hope they can remedy the exposition to something more organic in feel. Apart from that, it’s word every dollar you sink into it.