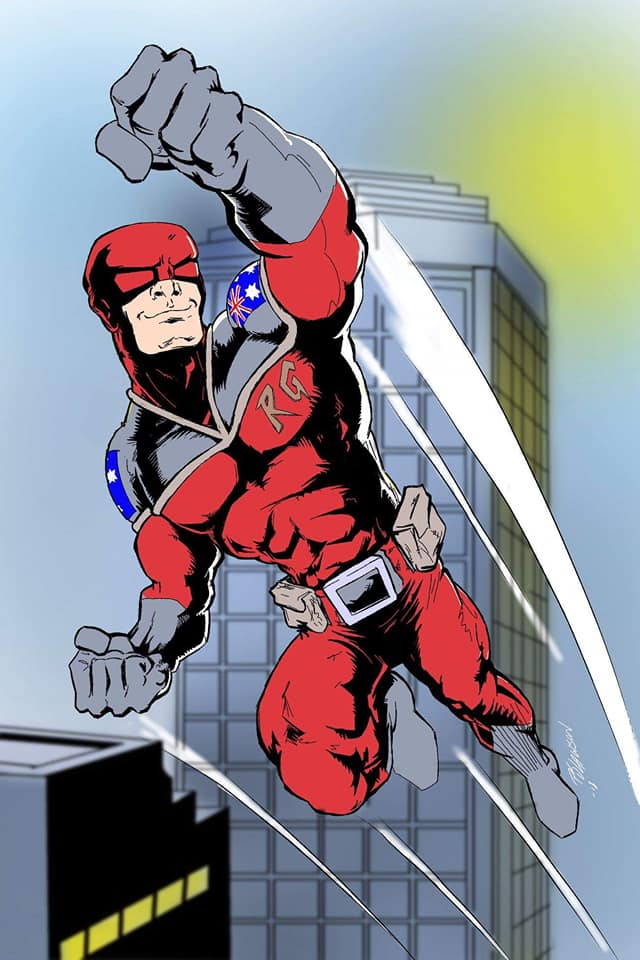 Shane (00:02):
Hello, I’m here to talk with Peter from Reverie Comics. He, uh, who’s a regular on Torn. Um, he’s, uh, joined ComX in the ComX 18 month calendar. So we’re here to talk about some of his art, so we know what it is he’ll be bringing to the table. Um, I have a… we’ll just check out one of your pictures. We’ve got Red Gum here. Um, this particular drawing of Red Gum, uh, flying in front of that building. What is it you like about this picture?

Peter (00:36):
Um, I just liked Red Gum’s design. Yep. Uh, I got, then I got the [inaudible] opinion on issue one. When I got the brief from Gary Dellar about what he wanted. It was a very great, it was a character that’s designed by a 14 year old kid that comes to life. Oh, okay. And his name is Red Gum. Alright, so I just sort of got What would I, what would he do and worked off on that side I drew? I basically do it really, really simple and some of the details are my own design there, but, um, it was just as a 14 year old kid, I was copying other superheroes. So essentially I copied Captain America at the start and took off [inaudible] and added that and ended up coming up with that in design the flags on the slaves and all that to get that patriotic sort of Australian look. And, um, it was actually the first form of design I came up with and Gary just said Yes, and we didn’t change it from there. So, so that was good. That was the only one I didn’t redesign. Pardon?

Shane (01:59):
Sorry. I didn’t mean to interrupt. I was just saying, I didn’t realize that you actually designed Red Gum, so that’s pretty cool. Yeah.

Peter (02:13):
Yeah. Um, in, in the first four issues of it anyway. Um, so yeah, basically it was like, here’s what we want, what that look like and then we went from there, so that was a big deal. Um, and the funny thing was Red Gum was one of my early sketches that I didn’t show anybody. Whereas most of the very first ones I did, excuse me, [inaudible] from the time we first drew him, Dylan drew a slightly simplified version of Red Gum we use now. And it’s actually what I do the first time, even though he never saw it, which is kinda weird, considering what I originally drew, which was quite strange. And then yeah, if you know what I mean?

Peter (03:17):
Yeah. So in Toby, he’s a bit simpler, but he goes and appears, and then he appears, wakes up in Torn, because probably just drew him with a different routine. And that’s what I originally drew Red Gum is even though I’d never shown anybody that just the normal reoccurences.

Peter (03:41):
Sort of couldn’t believe it when I first saw it, you gotta be joking. Um, but yeah, Red Gum, is just this design that I liked,

Peter (03:52):
A lot of people have said they sort of really likely to come up with them. It’s really fun to draw cause he’s never, he never takes off seriously now.

Shane (04:22):
Yep. Oh, sorry, sorry. Sorry. You already said that. I wasn’t thinking. Okay. Um, were there any challenges during this particular piece?

New Speaker (04:34):
Um, just, you’re going to bet that, if I had it side by side with the original red drawing that I’d done, you’d be really amazed how that does essentially the same pose but a lot better. Um, Actually something I’d like to do is take an old drawing and compare it to a new one just to go, “Oh, okay. I am actually progressing.” That’s good to look back.

Shane (05:04):
Well, it’s, it’s all it flows. So yeah. You wouldn’t see it, the improvement unless you actually can prepare it. Yeah. Yeah. So, um, did you have to learn anything new to, um, do this particular drawing that you’ve got here with him flying?

Peter (05:25):
I think that’s the first time I did some deep focus and stuff like actually using a digital platform more like, cause most of my work I do on, on my Surface are digital. So almost watch things on that. And I think that was the first one I started using that or that like that, as the background, see how they work.

Shane (06:07):
Oh, okay. Um, so I guess this particular picture, um, how will you think it will connect with people?

Peter (06:19):
I just think it’s a little bit of fun. It’s just supposed to be a fun drawing and get an idea that, that it’s a fun character. That’s really all I was aiming for, rather than – What I do, any character, I try to put character into it. I don’t just want to draw and make [inaudible] heroes. That’s got to be, they’ve got to have to be putting something out there.

Peter (06:51):
A bit of personality exactly. That’s that’s the goal: they stay [inaudible] and the hard, the hard part comes when we do an, a comic page with all that. That’s part of the job,

Shane (07:24):
No, no, that’s fine. Thank you for your time, Peter. It was great to talk to you about your art. Um, it was very insightful on what goes on behind the scenes. Um, so yeah. Thank you very much. And um, catch you around.