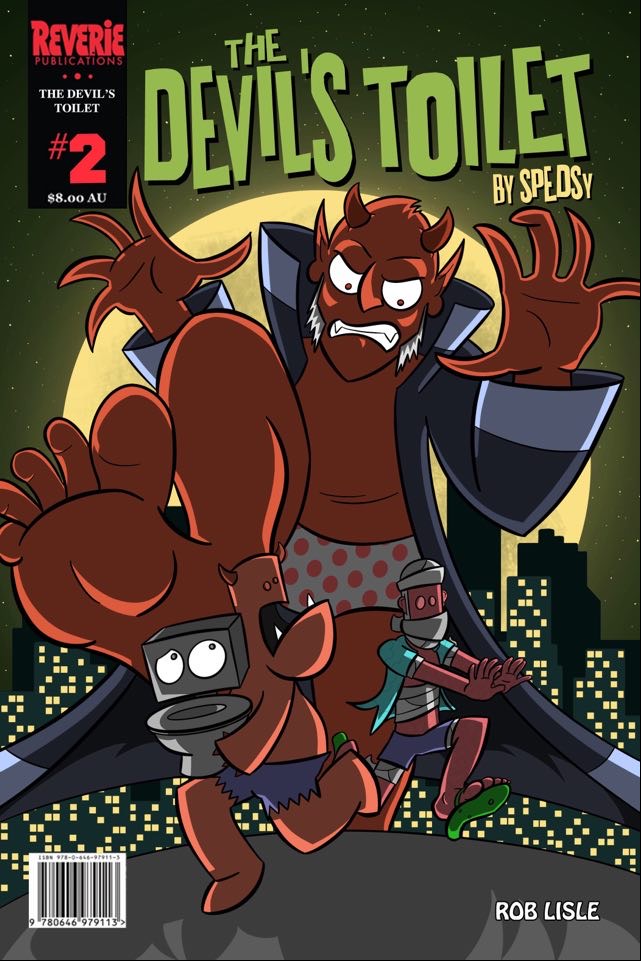 Shane (00:33):
So the piece we have here is The Devil’s Toilet. It’s cover number two. So what is it about this piece that you like?

Rob (01:08):
Um, but so I ended up having to do the reference for that one myself, um, complete in my undies and everything. Not like a photo of me doing that from multiple levels. Um, yeah, no, I’m pretty happy with the way it came up.

Rob (01:31):
Didn’t entirely get the full reference. Okay. I only have the one pair of this stripe. Yeah.

Rob (02:34):
So, yeah, yeah. Trying to get that pose. I really wanted to, I love so, um, uh, more of a cartoonist than I am. Uh, I would love to be a comic book illustrator that could like draw, huge scenescapes and, you know, with, I just love like any of that big monster imagery where there’s the big, massive Godzilla type creature in the background and the tiny little heroes. Um, this was me attempting that while within my sort of cartoony style. Um, yeah, so it was a challenge trying to get that sort of, um, have him look big and menacing while still people don’t. Uh, so it says the Devil’s Toilet, but then when I, I like to tie and have the toilet on the cover, so people go “Wait, it’s about an actual toilet.” So having him – having the main characters still somewhat prominent, but being overshadowed was kind of the, was the challenge.

Shane (03:36):
Um, so did you have to learn anything new to, to, to do this, um, particular cover or, um, was it just your skills in the reference?

Rob (03:47):
Um, lighting was a big, so obviously you see the moon in the background, um, and then the shadows that, that the shadows that it’s brought out, I’ve never done that much shadow before. Like I do shadows to sort of give people a sort of like a 3d-ish sort of look, but that’s, as far as I go, this was like shading the entire character, except for highlights around the side.

Rob (04:30):
Uh, I’m hoping that it sort of attracts the eye when it’s on the, on the comic book rack, um, that it kind of conveys that it’s a jokey book, but it has real stakes sort of thing. Yep. So are these characters about to get squished? You’ll have to read the book.

Shane (04:55):
Thanks very much, Rob. It was great to talk to you today. Um, it was good to learn about your art. Um, so, um, catch you either in the next video or you can check out the next person’s video.

Shane (05:11):
If you’d like to see more of Rob’s work, go to psychojanitor.com to see what Rob has contributed to the calendar. Go to ComX.link to register your interest and just sign up with a Kickstarter and register to get a reminder when the campaign starts, uh, thanks for your support. Have a great day.