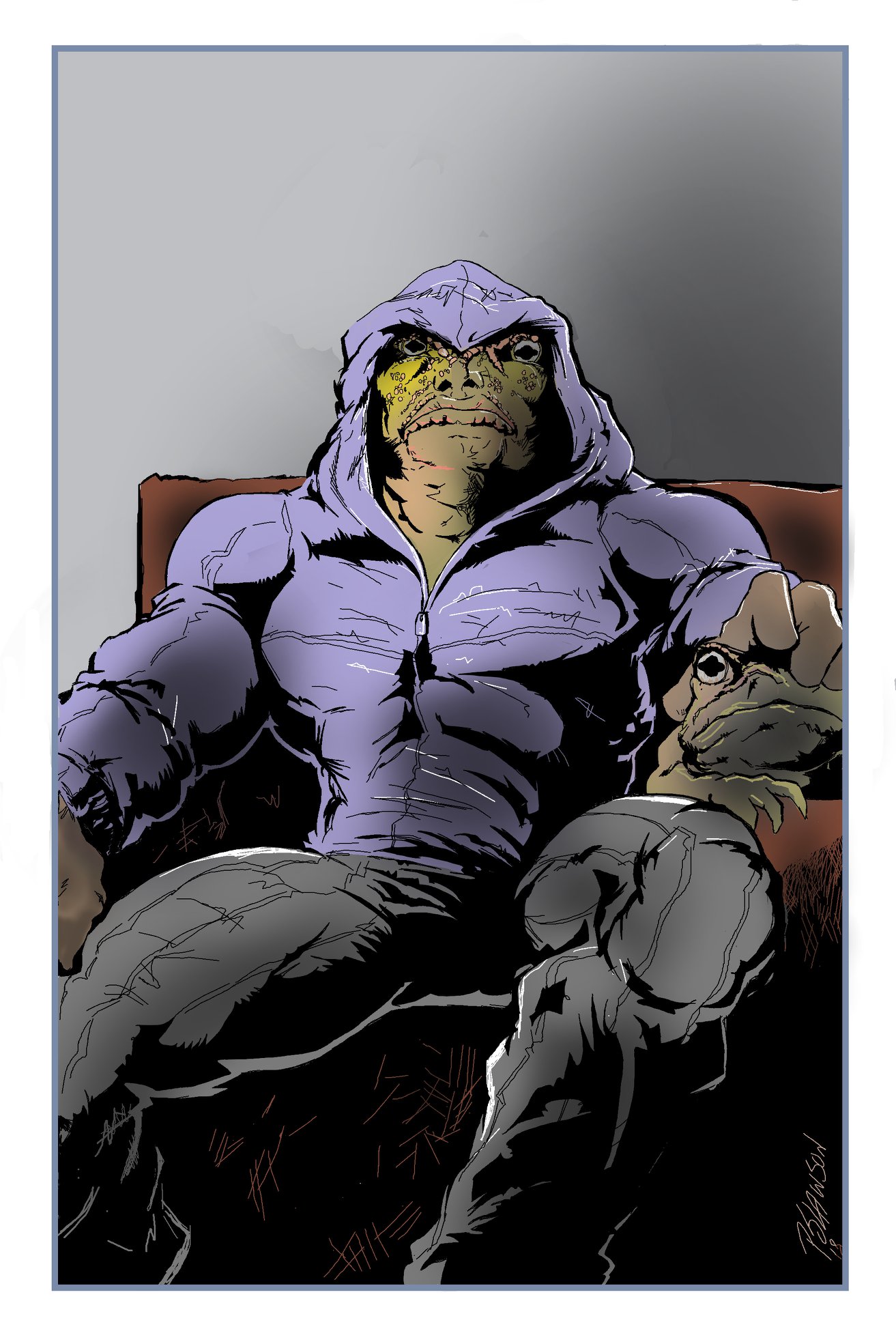 Shane (00:02):
Hello, I’m here to talk with Peter from Reverie Comics. He, uh, who’s a regular on Torn. Um, he’s, uh, joined ComX in the ComX 18 month calendar. So we’re here to talk about some of his art, so we know what it is he’ll be bringing to the table. Um, I have a… we’ll just check out one of your pictures.

Peter (00:34):
And he is like the, the leader of the, villains of the Torn comics. Basically big guy with the long game, essentially with him was come up with somebody with a frog head in a way that hasn’t been done a thousand times before.

Peter (00:56):
They’re saying that Toad in the X-Men comics, [unintelligible] to try to come up with a way to do it that isn’t that again?

Peter (01:13):
So essentially she actually started off in my head as mum, granddad.

Peter (01:22):
Not true! Originally, he started off as Danny DeVito, but that was going to be a short little SWAT guy and Gary wanted him to be big and imposing so I went from Danny DeVito to Marlon Brando and I sort of swapped out the Marlon Brando, to get the look.

Peter (01:42):
Get a Marlon Brando in sweats and started doing it until it had what I wanted.

Peter (01:49):
[unintelligible] Marlon Brando, but that was sort of where he started.

Shane (02:01):
Yeah. And the cane toad would make it a bit original too. Cause they’re, um, pretty distinct type of toad,

Peter (02:10):
Not distinctly Australian problem. Um, and isn’t, it’s an interesting character and what I know of his backstory, which the comics will explore further as we go. But, um, but yeah, he’s supposed to be sort of big and imposing, like hiding in the shadows farm loader mice kind of figure. So yeah, all that to do with keeping that line.

Peter (03:06):
[inaudible] got cane toads at random and we thought immediately, clearly Godfather. Couldn’t cut it in hindsight instead of a [unintelligible].

Peter (03:23):
He’s designed some that are more refined by the time I got to that place.

Peter (03:31):
And he, a lot of work to design and I feel sorry for anyone else who has to join because he’s not easy. It’s a lot of work and I liked the way it came out. So yeah, that’s about it.

Peter (04:06):
Yeah. I had to learn how to draw cane toads! Well, I actually had to sit down and do all of his little nose ridges and those they’re not just sort of random pointy bits, all of these little bits and bobs on his entire head or literally all kinds of cane toad stuff.

Peter (04:28):
So I haven’t just put a frog here and there. I’ve literally demonised the cane toads. Every bump and region, eye shapes and the little line bits and all that, are all things cane toads actually have. So I’ve literally had to sit here with images of cane toads all over a computer screen while I figured out how to put a line to it. It was a lot of work and it was fun.

Peter (05:10):
I hope, um, I don’t, I’m just typing words that when people read him in the, in the comics that the messaging I want to put in him comes across, and you don’t wanna know that until it comes out. I think it’s there in that drawer. And I think sort of like the powers and stuff sort of has that about it. Um, hopefully when it comes to shading comics, it all comes out and we’ll get that impression, really not somebody you want to mess with/

Shane (05:39):
But he doesn’t look like he is. So someone you want to mess with that’s for sure. He looks quite bulky and big and scary. So

Peter (05:48):
Yeah, that’s the idea. That’s what he’s meant to be. The hard part is getting that right. I didn’t want him to feel slobby. I could have done that, but that’s not the way Gary wants me to go with it. Originally, I had him quite fat and fancy

Peter (06:18):
Um, Thank you for your time, Peter. It was great to talk to you about your art. Um, it was very insightful on what goes on behind the scenes. Um, so yeah, thank you very much. And um, catch you around.

Peter (06:18):
Peter Lawson is contributing to the comics 18 month calendar, uh, to check this out, go to ComX.link. This will take you to Kickstarter pre-launch page, where you can get a notification by email when the Kickstarter begins. Thank you for your support and talk to you later.